In the spring of 2015 when I was national sales manager for Selection Massale, I wrote a post called “sleeping with other cities” about traveling to the southeast to promote the Massale brand. The journey stuck with me. It was the first time I’d visited Atlanta and New Orleans — iconic cities of the southeast! In retrospect, the reason this trip resonated so powerfully is that I loved the work. In retrospect, I’ve been trying to get back to this type of work since it escaped me in the fall of 2015. Happily, Division Winemaking Company came my way, and with them I have the opportunity to work markets across the U.S. again. 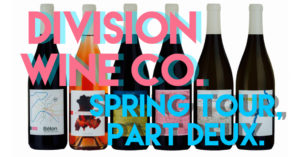 National selling differs from regional selling. National sales takes me to major cities, also off-the-beaten-path places in America, and allows me to dip into their wine and food scene for a couple of days. I meet the players and see how the game is played in those markets. I scope out what’s trending there, what portfolios are hot, what and where people are dining. I spend time with portfolio managers and sales reps, which is both taxing and fun. Since prohibition, the rules of the alcohol game have been 99% state determined, which means that every market has its own laws and customs. I learn about those and file them away to strengthen my chameleon abilities to sell to whomever, wherever, however (as long as it’s honest — guiding principle: no lying).

Regional sales made me a specialist: a specialist in New York booze laws and customs, New York restaurants and retail stores, New York distributor portfolios. I was relationship-rich. Rather than fleeting rapports with buyers, I had extensive ones; sometimes a buyer’d be so thoroughly ensconced in my brain that I’d dream about them … unlikely to happen in national sales.

I do not think one of these jobs is superior to the other. Both have major pros and cons. While I thoroughly enjoyed working a regional sales route for MFW (notably because MFW is a superb company with superb wine), I’m thrilled to be working a national route for Division. There are two things that draw me to national sales: the opportunity to travel the United States, and the consequent opportunity to celebrate small and burgeoning wine markets. It’s a given that the wine will be good in New York, L.A., Chicago. But an interesting wine market in Jackson Hole Wyoming, or Savannah, or Knoxville? Now that’s something …

On April 30th, I flew to Charleston to begin three weeks of market visits across the east coast followed by a week in Oregon for I Love Gamay, a festival I’d aided in the production and planning of. Looking down the barrel of this trip was daunting: a month of crashing in hotels, airbnbs, on friends’ air-mattresses and in their spare rooms, a month away from my home, my man and my cats, a month without routine, a month of living out of a suitcase. On the other hand: adventure! Life in Colorado is fairly staid and calm. I’m sleeping with a small town where people routinely wear pajama pants to the grocery store, where there’s virtually no grower Champagne, or black people, where I couldn’t buy a cocktail dress because shops don’t carry them. It was time to sleep with some cities — including the big mac-daddy of them all: New York, my former home.

Though I’d never been to Charleston, I was smote by powerful nostalgia when I touched down there. There were vivid green trees everywhere, moisture in the air, thick, soft light, southern voices speaking syrupy sentences dripping with irony, pimento cheese to feast upon, cicadas chirping loud as hell at night. It’s odd to experience a sense of home in a place you’ve never been, but that was my reaction to being reunited with the region of my birth and first 27 years of life, after four months in Colorado. Regional identity is real, and I didn’t know how strongly I identify as an east coaster, as a southerner, until I moved to the west. 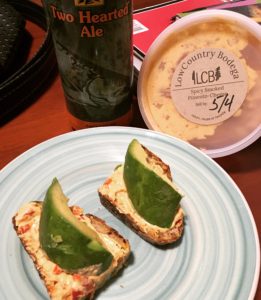 The food and wine scene in Charleston is poppin’ off right now. It’s clear that the city is going through a renaissance, or gentrification, or yuppi-fication if you will. There are quite a few buyers of New York origin in Charleston, which became a running joke between the sales rep and myself. Not that having New York wine buyers around is necessarily a good thing, or a sign of progress, but New York buyers do tend to push the envelope, to demand of their local reps the wines they used to buy in the metropolis. The sales rep, I should mention, is a gentleman named Kevin Kelley who is doing a smashing job not just for Division, but also for my former employer Selection Massale, for Portovino, for Jose Pastor Selections (these portfolios are all over Charleston), and more. Kevin is as good a rep as they come. He’s been in the Charleston food scene since the mid-80s; he knows everyone, and if buyer relationships were saturated fat, he’d be foie gras. He walks the streets of Charleston with a broken old schnook bag full of crazy good wine, seeing 10+ accounts a day, received with open arms by each one. 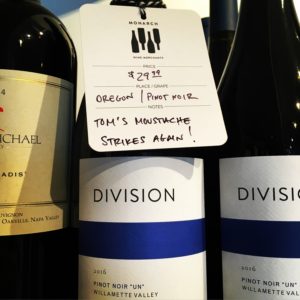 There were many excellent visits in Charleston, but I’ll highlight three spots. Graft is a new wine shop on King Street run by a couple of cool, young dudes named Miles and Femi. Miles worked as an assistant winemaker for Antica Terra in Oregon, and really knows his stuff. Femi, too. Apparently he’d shopped with me at Chambers Street back in the day. The booze laws in South Carolina allow these guys to have both and on and an off-premise licenses, so one can drink a delicious glass or bottle (with snacks!) at Graft. Their clientele is young and hip (like them!). I fielded quite a few questions about natural wine during my event there, and not one eye brow raised at the bottle of cold Gamay “Les Petits Fers” in my ice bucket.

Monarch Wine Merchants is a gorgeous shop further north on King Street run by a soulful guy named Justin who clearly has a hard-on for sparkling wine to equal my own. His sparkling selection reflects the give-zero-fucks-I’m-putting-amazing-Champange-on-the-shelf (even if I have to drink it all myself) attitude that imbued my Champagne shelf at Chambers Street. I could easily have spent a month’s rent at Monarch.

And finally Stems & Skins, a funky wine bar in north Charleston run by a genial, boisterous cat named Matt Tunstall. My wine bar takeover at Stems was followed by an opera performance during which I sat outside with Matt and Kevin, sipping a flight of Chenin (Division, Rochers des Violettes, Franz Saumon), enjoying the warm spring evening, getting tipsy and righteously eaten alive by mosquitos. Then we went to a dive bar that reminded me so much of the dive bars of my youth that an unbidden tear welled in my eye.

The next morning I set forth in the microscopic Toyota Yaris I’d rented for Savannah. Out of the city, I was in the rural southeast of my youth: crumby trailers with American flags in the yard alongside busted old hoopties with missing tires, swampy marshlands, Bojangles and Waffle House, poor and rich, black and white, living totally separately, yet right next to each other. I stopped to pee just outside Hilton Head at a dumpy junction where I was the only white person to be seen. Vestiges of slavery, segregation and racism still alive and well, an impoverished black community adjacent to a wealthy, white golfing town. But here’s the thing: rational awareness of how totally messed up the southeast is doesn’t stop me from feeling the visceral, palpably at home there.

Stay tuned for next week’s continuation of “working the market” (mid-Atlantic edition).