Visits after the Frost Part 1: Burgundy.

Difficult to believe it’s been a full year since my last trip to France. For awhile I was on a roll making two and sometimes three visits a year, but 2016 was different. There was other business to attend to. Now I’m overwhelmed afresh by how much I love this country, by the nourishment my soul takes here. And I’m brimful of gratitude that my life’s work allows me to drive, hike, and run its beautiful landscapes while becoming intimate with its people, those characters who tap the potential of the earth, gathering disparate elements and funneling them into the bottle.

This time I honestly didn’t know what to expect upon arrival: A population terrified by its presidential election on the horizon? Vignerons somber and pessimistic having lost significant percentages of their annual volume due to a frost that swept western Europe at the end of April? Philosophical farmers pondering the effects of climate change: some chalking it up to the mercurial nature of the weather; most ready to admit that we humans have irrevocably altered nature? We in the wine trade have a unique relationship with climate change. We see firsthand how a precocious spring followed by nights of frost in April can wreck our friends’ livelihoods. 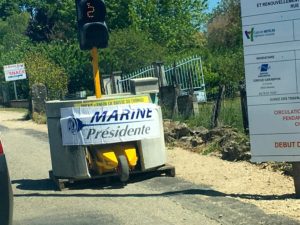 I assumed that whatever awaited me in France this year, it wouldn’t be pretty. Then again, what I left behind in New York wasn’t pretty either: the loss of my home, the last minute move one day before flying to France, two weeks of life’s bombardment, no rest for the weary, too slammed to make anything pretty: not my work, not my new home, not my relationships, or my writing. I couldn’t even make my email inbox pretty at the end of each day. There was only work, and moving, and energy so frantic it kept me from processing the sensations of loss, and change upon the horizon. Well — I thought — when I get to Champagne, I’ll relax.

Before arriving in Champagne, however, I made a loop around the eastern part of France, stopping in the Mâcon, the Côte d’Or, Isère, and Arbois. In Burgundy, I visited two Domaines I’ve sipped from copiously at this point, but never visited: Domaine des Gandines, and Domaines des Rouges Queues.

Domaine des Gandines in a 13 hectare estate in Clessé. Florent is the winemaker now, and he installed himself there in 2015 after many stages abroad learning the ropes. Florent’s great grandfather started the domaine, and they’ve been growing a little bit each generation since then. Fortunately for Florent, his father enjoyed working the soil and thus continued to do so during the chemical era rather than switching to chemical products like many of his contemporaries. Right now Gandines is certified organic; they will go for Demeter certification this year. Florent is extremely talented and it will be interesting to see him leave his mark on the wines. 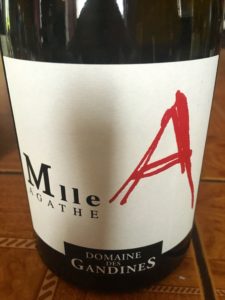 Sexy Mâcon Chardonnay from old vines grown on dark soils, aged in a 100 year old foudre, and sulfured only at bottling.

The Mâcon-Peronne and Viré-Clessé are blends of parcels, some on white limestone and some on heavier clay. In general, Viré-Clessé expresses more of the white limestone. Those wines are normally made in tank. Agathe (named after Florent’s niece, from darker, clay-heavy soil) and Terroir des Gandines are separate parcels of old vines. The Gandines vines are 90 years old. Those wines are fermented and aged in barrel with some percentage new.

2015 is a rich, powerful vintage showing lots of honey and orange confit. If you’re someone who prefers Chardonnay grown on the absolute fringes of ripeness, 2015 Mâcon may not be for you. But if you’re like me and there’s room in your heart for both austerity and opulence, there is much succulent, sexy deliciousness to be found in these wines. 2016 is more elegant and finessed. It was a difficult year due to rain and mildew in the spring, but Florent did an excellent job. This was the first day of the trip, and I didn’t yet know that for white wine from the east of France, 2016 was an absolutely brilliant vintage, marked by low yields, succulent balance, and a certain captivating floral note that was present at every domaine I visited from Clessé to Ambonnay. 2017 we’ll see, but Florent says proximity to the Saone river helped protect their vines against frost.

Domaine des Rouges Queues is a 5.5 hectare domaine that was started in 1998 by Isabelle and Jean-Yves Ventay with just one hectare of vines in Maranges, the most southerly village in the Côte de Beaune before one enters the Côte Chalonnaise. The soils here are crumbly limestone with a bit of granite, and produce salty, honest, delightfully rustic wines. 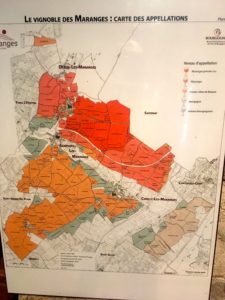 The Crus of Maranges.

In 2002 the couple began conversion to organic, and they were certified in 2007. They began using biodynamic preparations in 2015, with the goal of getting Demeter certified, but have abandoned the project temporarily because Demeter requires the growers to purchase biodynamic treatments, while Jean-Yves would prefer to make his own. (Or so Jean-Yves they told me; others have denied this and explained that in fact one can concoct one’s own preparations, but they must be heavily analyzed by Demeter.)

The ripeness of the 2015 vintage adds a little flesh to the bones, but the geek and the acid lover within rejoices equally in the crunchiness of the 2014s.

The Ventay’s Maranges Blanc comes from an 8 are parcel (that’s .08 hectares) of vines planted in 2005, and plowed with a horse. They are lucky if they make 500 bottles from this tiny plot. It’s made in the classic white Burgundy style: fermentation and élèvage in neutral barrel. This wine has always been marked by its cut, its rich texture and sharp angles, its lemon-y freshness and brisk minerality. It’s a wine of delightful contradiction. 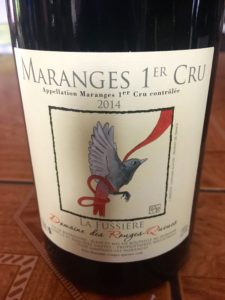 From friable clay and limestone at the top of the slope, fermented with gentle extractions, this wine is a highlight in the lineup.

The reds come from a mixture of different soil types and expositions, and are treated differently in the cellar according to the discretion of the vigneron in each vintage. Many of the wines see a percentage of whole cluster fermentation, but, for example, the Bourgogne Rouge is completely de-stemmed. The higher level wines typically see more whole cluster, and the Ventays did more whole cluster in 2015 than in past years, consistent with the overall promise of this vintage in Burgundy. The Vignes Blanches bottling comes from steep white soils with western exposition, the Maranges VV (from their first hectare of vines, which are 85 years old) from a more clay heavy vineyard, which gives a richer, more concentrated wine.

The top wines are 1er Clos Roussots and the Fussières. Clos Roussots is a mid-slope parcel that is always sunny and ripe, with small grape bunches from 40 year old vines. The exposition is south-southwest, and as one might expect the wine is powerful and in riper vintages quite velvety and suave. Fussières, by contrast, is at the top of the slope, where the soil is crumbly limestone. The vines were planted in 1972. Fussières makes a more elegant, finessed wine in contrast to the broader Clos Roussots. Both parcels are plowed with a horse.

The Ventay’s Santenay is from 3 adjacent parcels, for a total of 36 ares (less than half a hectare). In keeping with the differences between the two villages in general, the Santenay is pretty, floral, and feminine, with pleasant salinity, but less powerful and rustic than Maranges. This wine is breathtakingly pretty in the 2015 vintage with sweet high toned red fruits, and a soif-y nature that puts one in mind of Gamay with no sacrifice of the wines’s pinosity. 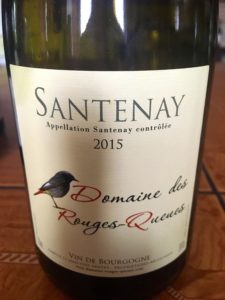 It struck me at this recent visit that we rarely find Burgundy domaines that so skillfully straddle the fence between traditional and natural. And now a week after the visit, I believe that it’s taken a domaine such as this to rekindle my interest in Burgundy. My relationship with the region is fraught. Many of the traditional wine, while absolutely stunning, don’t excite me much intellectually. On the other hand, projects such as the Ventays: farming exquisitely, digging deep into the concept of  “laisser le vin de se faire” (let the wine make itself) tug at my heart and mind. Even from less exalted appellations, these are the Burgundies I want to drink. And frankly, Burgundies like this only come from off the beaten path appellations, because these are enclaves of freedom in the region.

More to come from Isère, Arbois, and Champagne, and let us pray for our French friends and their fraught political situation.