Visits after the frost 2: Going back to Arbois.

Knowing me as well as you do by now, dear reader, you can imagine how elated I was to return to Arbois. In addition to the bucolic beauty of the place, and its delicious wines, Arbois is the site of some of my fondest recent memories, many of which came flooding back as I neared this picturesque little village. Those last dozen kilometers between Poligny and Arbois make me tear up every time, just as the dozen miles from Carrboro to Saxapahaw. It’s nostalgia, but it’s also the sensation of drawing near to a very special place. 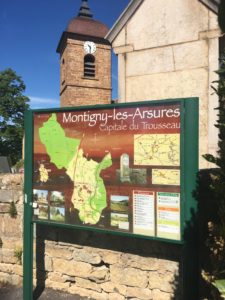 There were lots of tourists in “downtown” Arbois. It was a beautiful spring afternoon, and a holiday weekend. I passed the church whose bells woke me up at dawn every morning for a month, Stéphane and Bénédicte Tissot’s shop, Hirsinger the chocolatier, the gendarmerie and Rue Tripet where Pierre used to live. I could barely find a spot to double park next to Les Messageries, my hotel of choice in Arbois, to collect the keys before rushing off to meet Fabrice Dodane of Domaine Saint Pierre. There were many weekenders sunning themselves on the Hotel terrace. “I know you! I know your face … English? ” said the owner of Les Messageries. He says that every time. Then I tell him “no, American,” and that I once worked a harvest here, chez Tissot, the great ambassador of Arbois to the rest of the world. In fact, I’ve been to Arbois once or twice or three times every year for the past half dozen years at least, but I didn’t visit in 2016, and I missed it.

“I’m waiting for some Japanese” Fabrice told me when I arrived in Mathenay at the winery (late, of course). I kissed Fabrice, patted the cat, scratched the old dog behind the ears. “They said they were coming at noon, then two, then four, now it’s five and they still aren’t here. They’re taking the train from Lons.” This made absolutely no sense to me. Lons-le-Saunier is a small city about an hour south by car. That anyone would spend an entire day waiting for a train from Lons to Arbois boggled the mind, but I immediately felt better about my own 1.5 hour tardiness for our meeting. Taking in this familiar room, I label-checked an array of dead soldiers making a frieze around the upper reaches, and gawked at two jeroboams of Chartreuse in yellow and green (as-yet-unopened). A magazine photo of a naked women with gigantic breasts and washboard flat abs rested against Fabrice’s computer. I imagined her giving him inspiration as he waded through customs paperwork. The phone rang. It was Fabrice’s tardy Japanese. He tried to put me on the phone, but more confusion ensued. “They won’t be here for at least another hour. Let’s go look at the vines?” I loaded into the passenger’s side, notebook in hand.

Looking at vineyards (on voit les vignes?) is a crucial aspect of what we do in the wine trade, and when a winemaker asks if you want do it, the answer should always be “yes.” Most of the magic happens in the vines. It’s here that we see what kind of farming the vigneron prefers (organic, biodynamic, herbicide free, plowed with tractor, plowed with horse, grass between the rows, no grass between the rows, pragmatic use of chemicals here and there when necessary, etc … there are a multitude of legitimate choices, and some illegitimate ones, such as loading the ground up with chemicals to make the work easier. When a vineyard is worked this way, there is no life between the rows, and vines stick out from dead earth like gnarled shoots on the face of the moon. If — while looking at a chemically farmed vineyard — you can’t imagine good wine being produced from it, that’s because good wine is rarely made from chemically farmed vineyards. Healthy soil makes healthy grapes, which make delicious wine.)

It’s in the vines that we see what kind of pruning the vigneron prefers: Chablis, Cordon du Royat, one cane, two canes, pergola, again a multitude of choices, all producing a calculated effect. It’s in the vines that we see the exposition and the soil type, the overall vibe of the vineyard, which (yes believe it or not) comes through in the wine provided the vigneron isn’t fucking it up in the cellar. All this to say that an important part of the job is bumping around in dirty farm vehicles, making small talk, and stopping here and there to jump out and survey the ground and the plants.

It’s in the vines that we see the damage done by frost and vine diseases, and to be honest, things were pretty bleak in the vines in Arbois that day. My first note from the visit says “3 hectares “foutu” (“fucked”). Late spring frosts burn the buds, and so rather than tiny green shoots along the branch, you see browned nubs where the bud once was (if I were really worth a shit, I’d have snapped a photo, but I’m terrible at photos, and prefer to paint the picture with words). Fabrice will be lucky if he gets 40% of a normal crop in 2017. He makes these early days calculations by counting the number of burnt buds versus the number of healthy ones along a branch. Everything between Arbois and Pupillin (Gaudrettes for example) was frost damaged to the extent there was hardly a green shoot to be found. It was the worst I saw the entire trip. But on a positive note, the Saint Pierre vineyard is higher up, on the other side of Arbois, and looked to be in pretty good shape. Frost descends the slope, and so upper slope parcels are generally less touched than lower slope ones.

We returned to the cellar to taste — or rather to drink. It was apéro hour, and Fabrice has a dynamite slicer that allows him to make wafer thin shavings of saussiçon to snack on. Vegetarianism was out the window, at least for the evening. It was interesting to taste the 2015 Chardonnays Château Renard and Chapon next to each other. The Renard comes from more limestone heavy soils, versus marl for the Chapon. The Renard is made in tank, 12 months sur lie. The Chapon is made in barrel (both fermentation and élèvage). There’s more minerality and tension in the Chapon, but lots of immediate pleasure in the Renard, like a Maconnais wine with more cut. 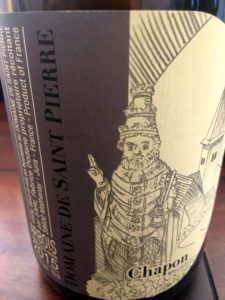 We tasted a new wine from Fabrice called Les Brûlées from a vineyard on the Montigny side of Arbois, with limestone heavy soil. It’s made in wood as well, and next to Chapon you also have a nice illustration of the two most important soil types of the region. Brûlées is a big, dense, powerful wine that veers in an oxidative direction and is distinctly redolent of Jura, the must in the cellars, the green, fragrant breezes, apples from wild apple trees, and the sweet, lactic, nuttiness of Comté.
The 2016 whites out of barrel were reductive on the nose, but fantastic on the palate. Fabrice hasn’t used any SO2 in the 2016 wines, though he might add some down the line if he thinks it’s necessary. As always, he is pragmatic. Right now the wines are taking advantage of the natural anti-oxidant properties of lees (hence the reduction). This will be a glorious white wine vintage across eastern France. Yields were low, and even though there was lots of rain and rot in the spring, warm dry weather came along toward harvest time to make for a great vintage in the end. One never wants to rejoice in suffering, but it seems that challenging vintages often produce the most glorious results. I was particularly impressed by the ouillé Savagnin bottling called “Autrement.” 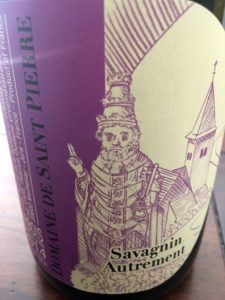 Fabrice is changing things up a bit with the Pinot Cuvées Saint Pierre and Gaudrettes in 2016. Both are grappes entiers (whole cluster), and at least partial carbonic. There’s some Poulsard in the Gaudrettes, though it’s still mostly Pinot. As usual the Saint Pierre is lively and bright, while the Gaudrettes is darker fruited, more brooding and tannic. Even with some alterations in cépage and winemaking, the character of these vineyards comes through, and as with Fabrice’s whites, we can see the contrast between limestone (Saint Pierre) and marl (Gaudrettes) in the reds as well.

Fabrice and his lady friend Yannick took me to dinner at a classic French restaurant called “Le Bistronome”. I’d been there once before, and the setting brought back memories of a conversation I’d had about natural wine in the Jura. I believe that to be truly invested in wines of the Jura, one must be at least interested in and open to natural wine. Organic farming and natural winemaking (by which I mean minimal intervention in the vines and cellar) are a mindset and a way of life here. Wink Lorch will have to stop me if I’m wrong, but I have the impression that chemical farming and cellar spoofilation never really became the norm here as they did in other places. I find the local vignerons proud of this fact, proud of their respect for the earth and its bounty, engaged in conversation with one another about how best to let the wine make itself. It’s one thing to express (as I often do) a preference for the traditional styles of the region: sous voile whites and crunchy, crystaline, high-toned reds, but to be closed off to natural wine is to be closed off to the Jura. 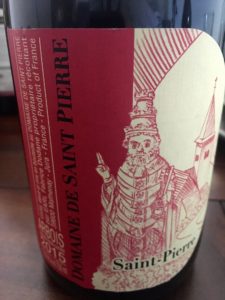 We drank 2015 Pinot Noir Saint Pierre, and 2014 Les Brûlées at dinner; both were absolutely singing. At the end of the evening, it was only us, the chef, his wife, and our waitress left in the restaurant. We sat together chatting and finishing the bottles. The chef’s wife who’d been working the floor all evening began to complain jovially about tourists who take pictures of their plates all night long rather than enjoying good company at the table. I was glad that I don’t often do that … certainly that I hadn’t done it this time. Then she began to tell a story of a conventional farmer who’d tried to sell her some wine recently. She told him “No I’m sorry. Your wines aren’t as good as the organic wines I buy …”

After dinner I insisted on walking back to the hotel. I needed to soak up the ambiance, listen to the river babbling by, breath the clean, cool air. There were tears in my eyes once again, the tears that come when you wish for a different life, one you can’t ever have. Those kind are fairly self-indulgent, and they pass quickly.