Before diving into this post, I’ll cite one of the inspirations behind it: a recent Trevor Noah bit on The Daily Show about tacos and their unwavering popularity. I watched the episode after a trip to Wyoming and South Dakota, where Taco Johns, Taco Bell, Chipotle, Qdoba, not to mention So-and-So’s Mexican Grill(e) line the town streets like bastions of spice in an otherwise bland, desolate, and steak-filled landscape. The irony, as Noah points out, is that even in the reddest and most anti-immigrant places, people love tacos. Dear Mexico, We’re happy to appropriate your cuisine, but get your people out of our country. Messed up, right? Mexico should take back its wonderful cuisine! We don’t deserve it. But back to wine …

Years ago, two friends and I attempted a wine and taco night in Brooklyn. We ate Jefferson-stop-off-the-L-train tacos: flavorful shredded meat in double-layer soft corn tortillas with cilantro, lime, queso fresco, and spicy sauces. We mostly drank Riesling. The pairings were fine. We attempted one red wine as well. As I recall it was Mencía from Ribera Sacra, and it was terrible with the food. We quickly abandoned hope of a good pairing and, by the second taco, had switched to beer. Lesson learned.

In the years between that long-ago, snowy Bushwick evening of unholy food and wine liaisons, and this year, I did not try wine and tacos again. During those years, I rarely ate Mexican food unless I needed a night off booze, in which case I’d get a burrito, a food that — in its very essence — seems to defy wine of all colors and flavors. Burritos are uniquely bad with wine. It’s a texture thing.

2018 has brought Mexican food back into my life in a major way. My dining partner is part native/Mexican (meaning that his mom’s people migrated up to Rapid City, South Dakota from New Mexico over several generations, and are darker hued with hispanic last names). He learned many recipes from his mom and grandma, and is a skilled cook.

While I’m a standard issue caucasian mutt, my mother was an ESL teacher and social worker in rural North Carolina in the ’90s, and lots of excellent Mexican food, not to mention recipes, entered our house courtesy of her students and their families. In my early teenage years, rather than leave me home alone, my mom used to take me to trailer parks to visit the families she worked with. We often left with towering piles of fresh corn tortillas, which I devoured with gusto in the car on the way home. For dinner, my mom would make red beans flavored with dried ancho chilis to fill our homemade tortillas. I also grew up eating delicious Mexican food, and it was rarely Monterey Jack-smothered enchiladas on a molten plate with beans, Spanish rice, iceberg lettuce, and canned black olives (who decided black olives belong on Mexican food?!?).

This is all to say that between the two of us, the Mexican food game is strong. However, I’m a wine lover, so I needed to find a way to make wine and Mexican food work, and I’m thrilled to report that it can be done!

A glorious bottle and a mislead pairing.

Trial and error began when I first arrived in Colorado almost a year ago. In the midst of penning an article for Alice Feiring on reduction, I popped a bottle of 2014 Enviñate Táganan Blanco to have with my tacos. The wine was perfect (reduction gone — for those following the saga of this bottle), but the pairing was not. Táganan Blanco is unapologetically dry with flavors veering in the salty, preserved lemon direction. It’s a fairly lean, yet amply textured wine that is more about mineral character than fruit. Bottom line: Mexican food needs fruit (not in the food, dear GOD, but in the wine).

This brings me to my next point: the obvious solution is off-dry Riesling, but I shy away from recommending Riesling with Mexican food for two reasons. The first is beans. Many Mexican dishes feature smashed or refried beans, and mushy beans have nothing to say to pure, crisp Riesling. Secondly: good luck getting Feinherb to pair with any kind of salsa or pico de gallo.

(Caveat: I hardly ever eat meat anymore, and never cook it at home. Tacos with meat rather than beans work better with Riesling.) 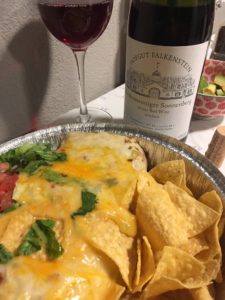 Fruity light reds are one answer to the conundrum.

While, for me, Riesling is not the answer, I did have moderate success with Spätburgunder. The tinfoil box photographed here comes from a local chain called Cafe Mexicali. Mexicali was born in Fort Collins Colorado, and has three branches, all in the area. The tortillas are cooked fresh to order on a giant tortilla press, and as long as one steers clear of the gluey white sauce, it’s some of the most palatable chain restaurant grub around.

Falkenstein Spätburgunder is one of a few red wines that do not undergo malolactic fermentation, so the wine is extremely crunchy and full of cranberry and other sour, berry fruits. It also has little tannin to speak of, making it perfect for vegetarian foods. Though Falky Spät was on a totally different wave length than the dish (“smothered” burrito with corn, pintos, and rice inside), it brightened things up and offered a welcome counterpart to the food, like jumping into brisk water after a sauna. Far from perfect, but a step in the right direction.

Around mid-year, we started to get visitors, often wine people, coming to see nature, stopping off on their way from one coast to the other, sleeping in the spare room, enjoying the sunshine and legal pot. By this point, tacos had become a bit of a spécialité de la maison chez nous, and so I decided to come up with wine-friendly tacos that would allow us to strut our culinary stuff without having to resort to beer. I settled on the following combination: well-spiced yet non-mushy pintos, pan-fried potatoes, Mexican coleslaw, queso fresco and homemade pico de gallo on corn tortillas. As long as nothing is too terribly spicy, Sophie’s Wine-Friendly Tacos can pair well with a number of vinous libations. However, the absolute best pairing to date was a dark colored rosé from Domaine de Kalathas on the Greek island of Tinos. Go figure. 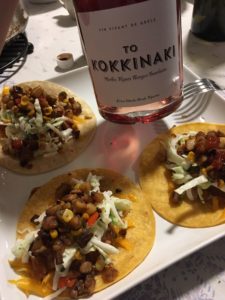 And the winner is … Kokkinaki!

Made without additives (yet pristine and flawless), Kokkinaki is (I believe) a field blend of Koumariano, Mavro Potamisi, and Kondoura. The vines are extremely old and own-rooted, cultivated biodynamically. Jérôme Charles Binda, the winemaker, makes about three bottles a year of this … I felt pretty lucky to be drinking it, especially with tacos. I mean: has anyone besides us tried this wine with tacos?!? The success of the pairing was owed entirely to the wine’s unrelenting fruitiness. Cherries, cherries, and more cherries! I liked the wine; I liked it even better with the food, which, at the end of the day, is the ultimate testament to a successful pairing.

At long last, after almost a year of trial and error, I’ve concluded that magenta, fruity-yet-dry rosé (preferably from a Greek island) is the way to go with tacos …

And, for all you anti-immigrant folks out there: NEW RULE: no more tacos if you support Trump’s border wall!