The situation on Friday evening was this: Ernest was proposing to order a bottle of ’61 Huet Demi-Sec before we’re received the first round of appetizers. I spoke out: “Wait! Isn’t ’61 Huet a Vino da Meditazione? We can’t drink it now.” The Italians chuckled, seemingly tickled that I knew the expression.  Over this dinner, I realized the concept of Vino da Meditazione is real. The expression first entered my wine lexicon back in September when Portovino, our Italian importer, did a little presentation on Italian wine words. These guys from Portovino are sarcastic, and so when Ernest told us “Yeah Mark always has to have a Vino da Meditazione at the end of the meal” I figured he mostly joking, that the comment was part of their Car Talk routine, rather than … I dunno … a category of wine.

A Vino da Meditazione is something you sip at the end of a meal, not because you need anything else to drink or to eat, not because you should (although who is to say you shouldn’t?), but because you can. It’s a wine sipped purely for pleasure, on its own, or with a nut or a sliver of cheese merely to remind the drinker that it’s wine, and therefore inherently better with food. Madeira comes to mind, Marsala, Port. Dry red wine is possible as well, I’ve heard, but only if it’s old. A romp-y young red will never fit the bill, nor will a zesty, crisp white.

As someone with an interest in how wines pair with situations, I believe no time could be better than the present to reach for a wine of meditation. We’ve been dealt a blow so tough that words fail, and yet all we encounter are words: words of anger, frustration, fear, heart-break, words on Facebook, words in the news, words streaming out of the mouths of friends and loved ones, words atop signs protesting the election of Donald Trump. I’m not suggesting that the words should cease (obviously, I’m writing), but that it’s time to seek out that Vino da Meditazione, to spend some moments in silence, or in peaceful conversation with people whose opinions you value, reflecting on how this happened to our country, and … yes it sounds cliché … relishing the moment because it is all we have, now more than ever.

For the past few months, I — like many — read obsessively about the election. Most mornings I’d start with the New Yorker over coffee and breakfast, then tote it to the gym and get the pages all sweaty, immersed in articles about the alt-right, about Republican distaste for our president elect, about how the Democratic party alienated the White Working Class, and on and on. I’d finish my day this way, too, alone, with a hodgepodge of leftovers in front of me, maybe a glass of leftover sample wine in my hand, maybe just some water. Like many, I’ve never been as politically engaged as I was this election.

One of the most interesting and personally upsetting articles I read dealt with a group of people the New Yorker refers to as “cosmopolitan élite,” pitting them educationally, socio-economically, philosophically, against the “white working class.” Am I a cosmopolitan élite? I asked myself this question time and again, and am still asking it now, and I don’t enjoy the direction these mental peregrinations take me because they implicate me and almost everyone I know in this national crisis.

I grew up in rural North Carolina; my dad was a southern, white, working class man who had guns, mildly racist attitudes, and who I’m fairly sure would have gotten a kick out of Donald Trump, though my mom would never have allowed him to vote accordingly. My mom spent the majority of her life educating and providing social services to hispanic immigrants, helping them to have better lives in America. I grew up in a liberal, academic family. I went to Quaker school, where multiculturalism and tolerance were features of the education. My grandparents marched in the first Civil Rights demonstrations in Chapel Hill in the 1950s. A mixture of beliefs shaped my early life, but my father’s mild conservatism was far outweighed by my mother’s liberalism.

I’ve lived in Brooklyn for the past nine years; I travel to Europe regularly; I speak French, I have two useless college degrees. I wept with joy when Barak Obama was elected in both 2008 and in 2012, just as I wept on Tuesday night, and on Wednesday, and on Thursday, Friday, and Saturday of this week, last night even. But as New York has become increasingly wealthy, a city of cosmopolitan élite, I’ve become increasingly alienated. Progressive, liberal attitudes hole up in this city, feeding off one another, fanning the flame of cultural and intellectual snobbery and superiority, and I believe this is where our downfall has been. It was staggering the number of times I heard, last Tuesday night, watching Trump make a clean sweep of virtually every “battleground state” including my own state of origin “why can’t New York be its own country?” or “I’m moving; I can’t live here”. Virtually every American with me that night was a battleground state ex-pat: Florida, Pennsylvania, North Carolina, Ohio, and I hate to say it, but we are part of the problem. We left our home states to come to a place where people think like us. It wasn’t until Thursday that I heard a single person say “nah we need to stay here and make it better.”

What does this have to do with wine? Essentially nothing; it’s a tenuous connection at best. I’m proposing that for every hour you spend cruising Facebook, either brawling with people who think differently, or engaged in large scale sympathy banter, you spend an hour away from the media, either thinking, or speaking to friends about why and what next. Break away from the screen, the newspaper, the talking heads, and find a meditative moment to be thankful for what you have. It’s easier said then done. 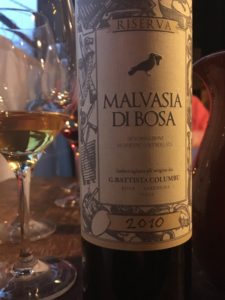 Columbu Malvasia di Bosa from Sardinia might be the ultimate Vino da Meditazione.

On a brighter note: it turns out MFW has lots of Vini da Meditazioni, and I would be more than happy to suggest one to accompany your election hangover. Malvasia di Bosa from Colombu and Silvio Carta Vernaccia di Oristano come to mind … But today I’m writing about one specific Vino da Meditazione: Golden Cluster Sémillon. I chose this wine because the place that gave birth to it, the David Hill Vineyard in Forrest Grove Oregon, is meditative, because when I went there in June, the vineyard itself evoked the fascinating, creative things humans do in pursuit of beauty and meaning. The David Hill Vineyard, a monopole of the David Hill Winery, which produces cheap grocery store wine, is simultaneously a place of striking ambiance, of peaceful breezes rustling the vine leaves as you meander between rows of different exotic grape varieties planted by ampelographer Charles Coury in the 1960s. There’s a bizarre duality to this place. 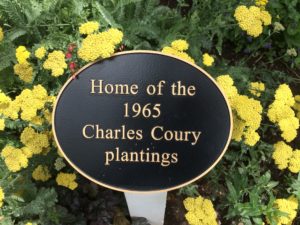 It’s an interesting story: Golden Cluster comes from three rows of vines planted in 1965 by Charles Coury, a graduate of UC Davis who, it is speculated, was looking to prove his masters thesis on growing grapes in cool climates. The rootstock came from the Wente vineyard in California, whence Kalin Sémillon, undoubtedly the most lauded domestic example of this grape. Grown at 550 meters altitude on laurel wood and basalt soils, these are some of the oldest vines in the state of Oregon. In fact, Coury planted the vineyard to many grape varieties from all over the world, notably Germany, Burgundy, and Alsace. Although grapes have been cultivated in Oregon since the 1840s, the 1960s mark the rebirth of the Oregon wine trade, and this vineyard was a sort of blank slate on which to paint the next stage. 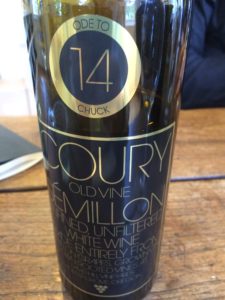 This is the Ode to Chuck bottling, which seems more new wood than the “regular” Sémillon, a 140 liter Chablis barrel charred long and slow.

Enter Jeff Vejr, a restaurateur and renaissance man who became fascinated by Charles Coury’s legacy. As we understand it, Jeff made an arrangement with the present owners of the vineyard to purchase three rows of Sémillon for this wine. He then brought back the brand Coury had created in the 1970s called “Golden Cluster.” The wine is raised in neutral French oak of which 5% is new. It is unfined and unfiltered, and Vejr waits an additional year after bottling to release the wine. He also recommends decanting for best results, and we can see why. As with many profound white wines, it’s best with air, and at cellar rather than refrigerator temperature. 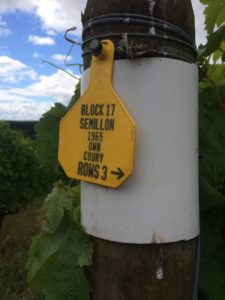 Despite its texture, this is not a rich wine in terms of alcohol, weighing in at 12.5%. Redolent of the outside of a pineapple or mango, preserved lemon, beeswax, with notes of honey creeping in with air, it has mellow but persistent acidity, and a silken texture. The wine has glorious length and depth of flavor. I don’t have a ready comparison. Then again it’s been some years since I tasted Kalin Sémillon. I do know that I love this wine, that it’s one of the few this past year that takes me immediately to a time and place, to a couple of individuals: Charles Coury but also Jeff Vejr, who wanted to make something profound out of these vines that were going into cheap grocery store wine.

I drank this wine with Dafne Sanchez, a friend from North Carolina, a Mexican-American woman more than 10 years my junior, the daughter of one of my mother’s best friends. We talked about lots of things, but mostly we talked about the election, about people who think differently, about whether there’s a possibility she’ll be deported apropos of our new president (it seems unlikely — she’s too far into the immigration process), about her fear of hate crimes in Greensboro, where she’s a German language and literature student, about the lack of trust in her fellow man she now feels walking down the street. It’s comforting to live in the liberal bubble of New York, where you can be fairly certain everyone you know is grieving and/or pissed as hell, but it’s imperative now more than ever to connect with people in the rest of the country, to seek out some kind of unity in these divisive times.