“And all the time there was that sound — why not call it a sound? — a sense of inaudible music which accompanies such things & is heard as tho’ beneath the open windows of a veiled mansion. It always was like that except once the music wd. make itself properly heard. Now it reminds me sadly of how I felt & so for a moment I forgot I’m supposed to be an old master & become an apprentice once more, all ears and full of longing.” – James Hamilton Patterson, Gerontius. 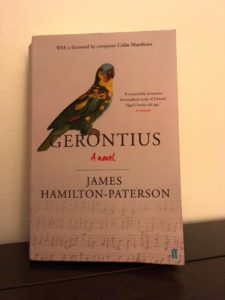 Please discover this writer if you have not already.

I don’t actually know Ernest very well. He’s our Italian importer; he lives in Tuscany with his wife and son. He’s a unique character, not cuddly, rather angular (not physically; he’s really quite debonair, sophisticated, mysterious) and opinionated, a truth teller … qualities that make a great wine importer. At any rate, each time our paths have crossed long enough for more than “hello” I’ve sensed tremors in the foundation of my belief system, not the support beams, more like distant rumblings under a recent corner addition. Does that make sense?

We were having dinner with Jamie from Chambers Street, torching our mouths with Laotian chili, and I was talking about being a farming nerd. Ernest interjected “No. No that’s not why I’m in it. To talk about farming. Honestly I find farming kinda boring.” He proceeded to explain — if I’m interpreting correctly — not that he doesn’t care about farming, rather that he cares most about the aesthetics of wine. What’s in the glass has to grab you. There’s gotta be a spark, intrigue, something that makes you go back for another sip to try to figure it out. For Ernest, so specialized in Italian wine, it’s bitterness. The bitterness of the tannins and the sharp, rustic acidity, bitterness that interplays with the fat and salt of the food, bitterness that mirrors the pain of death and forms the counterpoint to the sweet, richness of love. Did I go too far?

The spark stuck in my craw after this conversation over fiery Laotian food, the divine inspiration, the thing that gets us off our asses and makes us give a shit. It seems unfashionable these days to talk about “divine inspiration.” We’re very blasé; we’re jaded; we’re scientific not religious, and yet many who gravitate toward wine maintain a certain spirituality, hold tight to a kernel of ‘that which can’t be said’ to justify a life’s work in this trade. Over the past better part of a year, it’s been maximally convenient for me to let the spark lie dormant, to tell myself that I don’t really care that much about wine anymore, that I just need to make a dime, and the details don’t matter.

Why? Because (this will not come as a surprise to most of you) I’m about to leave New York. That’s right, folks. January I’m out, gone, bye bye, farewell NYC. Not only am I leaving, but I’m not going to another major city. I’m going to the ‘burbs, the country, somewhere with trees and humans in more equal proportions. Follow me closely on this one: New York is the most interesting wine city in America; of both wine and jobs it has the best and the most. Then there are other cities, which also have good wine and good jobs. Is this is Urban elitism? Maybe, but it’s also true. To leave New York — to leave the city — is to sacrifice that, and in order to make the sacrifice, to see the plan through, to pack up and go, it’s highly convenient to say “but I don’t care that much anymore, anyway.” Ah the stories we tell ourselves, and our ability to convince ourselves of their truth …

And so Ernest came to town, we had dinner with Jamie, and I started to think about the spark. Not to miss it because it’s still there, rather to ponder again its role in my life. My dear friend John McIlwain likes to recall a time when I was behind the desk at the front of the shop. He was a Chambers Street customer then. He’d ask about Champagnes, and his rule of thumb was that if I jumped out of my chair at the mention of a particular wine, then he knew to buy two bottles. The spark made me do that … now I think about it.

Last night I opened a bottle from the heyday of the spark, just to see what was going on, a little time capsule. It was Thomas Perceval Brut Rosé. In the winter of 2015, I went to France with Cory and Wolfgang. One of our missions was to find some Champagne for Selection Massale. Thomas Perceval is a young winemaker we met on that trip. He’s a friend of Aurélian Laherte, whence the contact. Thomas was about to release his first wines, 2012 base Extra Brut and Brut Rosé from Premier Cru vineyards in Chamery in the petit montagne (vineyards surrounding Reims to the south and southwest). Clearly engaged in the kind of work we believe in (organic farming, native yeast fermented base wines, minimal sugar and sulfur additions), it was a promising first meeting. When I got back to New York, I set about trying to convince Thomas to sell us his wine. And in the end, he did. 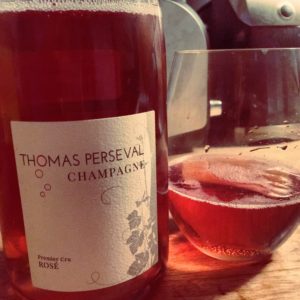 Like Thomas’ Brut Reserve, which I checked in on a few months ago, Thomas’ Rosé is even better now than it was: cranberry and toasty strawberry on the nose finely integrated with chalkiness and a firm, mineral backbone. It’s creamy, expressive and tensile, vinous, but joyful on its own, without food. I love this wine. It made me forget I’m supposed to be the old master. It made me feel like the apprentice again, all ears and full of longing. And I think this is the right state of being in which to leave New York. As yet I’ve only spoken of the sacrifice, with no mention of the benefits, which will doubtless be innumerable, hopefully enlivened by the spark as well as all kinds of other emotions I’ve yet to imagine.