the great patrimony rescue of 2016.

In my mind, when I left for North Carolina two weeks ago, I was going to have at least one or two mornings of down time in which to collect and regurgitate to the page a few of my experiences in Portland. I even brought my little notebook with me in order to be prepared for this eventuality. I had all these ideas bouncing around about how free winemakers in Oregon are, images of Chad Stock and his epic grafting project, of Jeff Vejr and his intense study of the historic David Hill vineyard, of Kris and Steven from Analemma and their sparkling wine vocation, the list goes on … In my mind when I left for North Carolina, part of me was still out there helping Scott Frank bottle Bow and Arrow Gamay. I wanted to tell so many stories! 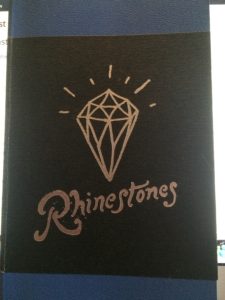 Nicked one of these labels from Scott’s winery.

It didn’t happen, or it hasn’t happened yet. What happened instead was that day after day for almost two weeks, beginning first thing in the morning, and ending when we were so totally spent and grimy that all we could do was pile into the back of the pickup truck, beers in hand, and head for a neighbor’s pool, a motley assortment of friends and loved ones and I worked on my parent’s house. 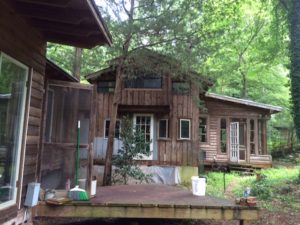 View from the back.

In advance, I was incapable of being positive about this experience, and instead cultivated a train of thought learned from my dad along the lines of “create abysmal expectations, be pleasantly surprised.” My house in North Carolina was built over the course of 30 years out of repurposed lumber from my dad’s construction jobs. My parent’s never threw away anything, and in addition to the house proper, there’s a massive barn, a carport, a non functional hot tub, a play house turned goat shed; there’s even a catamaran up in the yard that has been totally subsumed by ivy and shrubbery such that it’s barely visible.

The house is on a country road outside the town of Saxapahaw. It is at the end of a long muddy driveway, and cannot be seen from the road. There’s no mailbox, and the directions I gave visitors as a young person (pre-Google) ended with “go a quarter of a mile past the intersection and turn left at the bent post.” This is my patrimony. 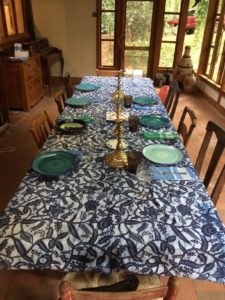 Those shiny brass candlesticks were gray when we found them in the barn. They look nice with the batik table cloth …

My parents had lots of friends. I invited about 60 to my dad’s memorial and 100 came. They had parties all throughout my childhood, and my mom had no qualms about feeding 10, 20, 30 people of ages varying from 3 to 90. This is where I learned to love wine, in theory if not in practice: watching my parents eat and drink and laugh with their friends. We also had many house guests, squatters who stayed so long they became closer than family. Sometimes we called the place “Ramshackle”; other times we called it “Margaret and Bobby’s Home for Wayward Men”.

We filled a 30 yard long dumpster with junk and made a giant burn pile, which we torched on a 100 degree day, and kept slowly fizzling until it was a pile of embers, still warm and smoking three days later. There were new discoveries constantly: my dad’s gun collection, booklets of valuable old coins, cabinet after dusty cabinet of tiny coffee mugs — 10 sets in total if not more! (Be forewarned, New York friends: you’re all getting decorative platters from Saxapahaw for Christmas this year.) There were also things of mine: the letters and emails I wrote to my parents during my study abroad semester, reams of college papers and stories from when I was smart and creative, photos I’d forgotten about eons ago. One day I’ll make an album, or maybe a book of letters telling a story … the story of my young life as the only child of two gregarious, hippie intellectuals in rural North Carolina. 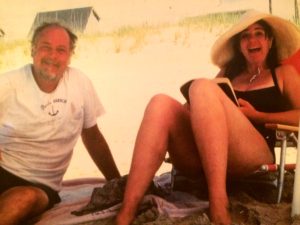 North Carolina beaches are awesome, by the way.

So many life lessons in such a short period of time. I learned — right away on the 4th of July when two friends I hadn’t seen in years pulled up the driveway totally unannounced to lend their hands and skills — that I am not as alone as I’d thought. The loneliness that inflected my last post faded away as I sank into the bosom of my greater North Carolina family. It’s a soft place full of kind, genuine people who seem to care unconditionally because they loved my parents, and I am what’s left. And yet it’s not a cloying place because sarcasm still drips from the leaves and branches, permeating the air with its tang. It’s a verdant, lush, green place, almost as rainy as the jungle and equally warm. It’s a comforting place I can be without pretense, without makeup, without adorning my sentences with lingo and bullshit, without the veneer New York has given me.

As always in North Carolina, I answered a lot of questions about what I do for a living. One friend had learned the word “schnook” from reading this blog, and had semi-successfully employed it in conversation! I was tickled. Over a table covered with pottery of various types, I realized what a sales person I’ve become as I pawned off sets of tableware on people: “I can’t even believe you’re contemplating starting a catering business without this massive salsa themed bowl with matching three tiered condiment insert!” Or: “You are the perfect person to inherit my Margaret Ellen’s favorite cake stand; we used this all the time when I was growing up.”

And then out of the blue came: “sometimes when I hear you talk about wine, I think you live in a fake world” from the lips of someone I’ve known for over half my life and love very much. Hmm. I mean … it is a fake world with its own rules and its own parlance, its own hierarchy and customs. I tried to explain that we tolerate a high level of fake-ness in the industry in order to engage with the real-ness, which is meeting farmers and winemakers and learning about what they do, supporting them economically, bringing their wares to the parched citizens of New York. I thought about Scott Frank and his perpetual search for real amongst the fake, his quasi-obsession with the topic. It’s a quest I’d like to take up.

I learned that I’m intensely, fiercely proud of who my parents were and what they created. Once the art and posters and postcards and cobwebbed shrines had been stripped from the walls we could see the bare bones of the house my dad built, and it’s beautiful! Well … some parts are more beautiful than others. There are a several decaying decks, one of which we demolished after someone fell through trying to wash windows. And speaking of windows, we had them professionally cleaned, and by the end they were gleaming, transparent in the daytime, and perfectly reflective at night. 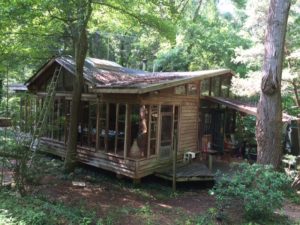 “People who live in glass houses should enjoy washing windows.”

The whole affair was bathed in an aura of regeneration: birth, death, and rebirth. It sounds strange, but watching the dumpster being hauled off, and torching the fire were gloriously happy moments. I’d even go so far as to say I was giddy chucking random baby pictures, moldy books, and my dad’s backlog of Fine Home Builders Digest on the fire. It was like a pagan ritual; a sacrificial copper head lost its life, its body continue to squirm and wriggle after the head had been severed. Then we smeared some ash on our faces like warriors. I’m not kidding. And while I’d love to say we roasted and ate the copper head for dinner, in fact we cleaned up and went to a fancy restaurant in Durham where we drank 2009 Marie-Noelle Ledru Cuvée Goulte. (This was great, by the way.)

Towards the end — it might have been in Willmington where I took a couple of true vacation days — I looked out over the harbor, lights bouncing off the water, the air salty, muggy, and pregnant with a torrential downpour, and thought about dining with Scott and Dana Frank at their home in Portland less than three weeks previously. We’d liberated a couple of little hot air balloons and watched them bob and meander out into the cool twilight, visible far into the distance. Scott told us they were for good luck, friendship, for the future. And who knows? Maybe they brought me some. Lots of things in life are hard and shitty, or mediocre at best. But once in awhile something happens that is so purely good and right and wonderful that it makes the struggle worthwhile.