It is a great testament to the generosity of my bosses, Kate Norris and Thomas Monroe, that last Tuesday they took their entire staff on a tour of the Willamette Valley. Kate and Tom have a larger staff than one might expect, and we were a group of 14 people: amply tattooed cooks and servers from the wine bar, our accountant, our assistant winemaker, various individuals whose role in the company remains a mystery (at least to me). We were a motley and jovial crew setting off for wine country in a big white van bumping ’90s hiphop after a breakfast of mimosas and croissants.

In the preceding weeks, this excursion had become lodged in my mind as a sort of team-building exercise, minus a few trust falls, plus a few glasses of wine and a vape pen or two. Harvest is on the horizon, and as always it’ll be a time of constant toil and stress, exhausting and fraught with the unexpected. I realize now that Kate and Tom took us to the Willamette on a gorgeous late summer day to heighten our understanding, to remind us why we do this, and to bring us together before the first grapes roll in. For me, it certainly produced the desired effect, and I found myself at the end of the day immensely proud to call these folks my work family.

Our first stop was at Argyle in Dundee. It’s immediately obvious that Dundee is a wine town. Like Beaune or Arbois, its main strip features many tasting rooms. Having taken quite a few work trips to Europe over the years, I find it fascinating to see the familiar tune of “wine country” transposed into a distinctly American key: everything new, shiny, and big. Yet the pioneers of Oregon wine were hippies, and there is something beautiful about the way they launched Oregon wine culture, including legislation to keep the city of Portland from encroaching on agricultural land. I haven’t spent much time in the Willamette, but its biodiversity strikes me every time. It’s not like the Langhe or Burgundy or the Marne Valley where rolling hills of vines stretch for miles. In the Willamette, mid-slope vineyards are responsibly interspersed with Filbert crops, berries, hops, woodland etc … I guess what I’m saying is that what the area lacks in old world charm and ancient stone wineries, it makes up for in interesting personalities and biodiversity. 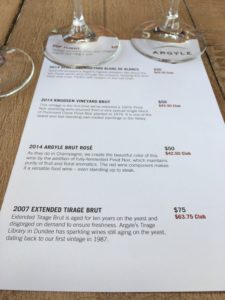 I hadn’t tasted a bottle of Argyle in many years, and truth be told my expectations were not the highest. Argyle makes 80k cases of wine per year. 40k of those cases are what the French call “Brut Sans Année” or basic sparkling wine. I am human, and as such harbor many prejudices, one major one rooted in the supposed inferiority of large-ish production wine. Yet there’s no reason why big production should mean a bad product. If the farming is good, and growth is responsibly managed without cutting too many corners, spoofing too much in the cellar, or selling out to a fickle market, the resultant wine should be as good as it was when the production was microscopic. (Caveat: the bigger the winery, the greater the temptation to sell out and spoof out.)

I should preface my notes on the Argyle wines by mentioning that we did not try the BSA, nor did we taste their Pinot Noir, whence my less-than-stellar impression of these wines. We began with 2014 Blanc de Blancs from the high-elevation Spirit Hill vineyard. Heavy influenced by the Van Duzzer corridor, Spirit Hill is a cool site, and early picking helps guard acidity to make a crunchy and focused base wine. I found this bottle to be quite Champenois with its toast, graphite notes, and mineral core. Dosed at 4 grams, it was an easy wine to drink, and I fell to thinking that Argyle’s BdB is probably more appealing to the average Joe than the stern and pillar-like Blanc de Blancs from Champagne I’ve come to enjoy.

Next came the 2014 Knudsen Vineyard Blanc de Noirs. 2014 is the first vintage of this wine and it was incredibly good. The block used features own-rooted Pommard clone Pinot Noir planted in 1974. These would be old vines by any standard, and especially in Oregon where the wine scene as we know it was born in the ’60s and ’70s. The wine was earthy and red-fruited with gorgeous raspberry notes across the palate. The Jory soil (ferrous red clay with volcanic rock) here surely contributed to the wine’s sanguine and succulent red fruit character.

It’s possible that Argyle’s Blanc de Noirs impressed me more than their Blanc de Blancs because the Knudsen vines are so old, the site so special. It’s possible that sparkling wine made from Chardonnay should hail from the fringes of ripeness, should be made from enamel-stripping juice. However I also believe that Blanc de Noirs is a category in which we find less competition from the old world. There are Grand and Premier Crus in Champagne dedicated to the production of world class Blanc de Blancs, but true Blanc de Noirs wines are still relatively uncommon in Champagne, even in prime Pinot Noir villages like Bouzy and Ambonnay. Of late, some of my very favorite Blanc de Noirs have come from the Aube: Ruppert-Leroy’s Les Cognaux, Roland Piollot’s Les Gravelées, Thomas Barbichon’s Blanc de Noirs. I’d conjecture the Aube and the Willamette might have something in common. Perhaps there’s a bright future for cool site, early pick Oregon BdN. Though it’s Columbia Gorge rather than Willamette, a bottle of Analemma should surely confirm the potential of this style of wine in Oregon.

The only slightly underwhelming wine at Argyle was the 2014 Brut Rosé. A blend of Chardonnay, Pinot, and Meunier, this was a pale salmon colored, easy sparking wine that had little to recommend it intellectually, though it was delicious enough for a warm morning in the sunshine. What the Rosé lacked in complexity, the 2007 Extended Tirage Brut more than made up for. This is Argyle’s BSA, aged 10 years sur lattes (versus 3 years for the rest of the wines). With additional time on lees, the wine had become creamy and savory. A lively conversation ensued about the difference between pre and post disgorgement bottle age, a topic I never tire of. 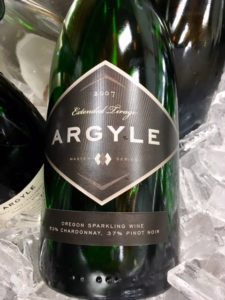 Next we headed to Parrett Mountain in the Chehalem Mountain AVA. We stopped at a gorgeous building at the top of the hill housing J.K. Carriere, a winery I’d heard of but never experienced. J.K. Carriere is the brain child of Jim Prosser, a laid back yet clearly motivated 50-something gent who lead us through an amusing history of his estate. In the late 2000s, Jim purchased a 40 acre farm at the top of Parrett Mountain called St. Dolores Estate. He’s in the midst of clearing, planting, and learning this terroir. In the meantime he sources a bit from Temperance Hill and other top sites. 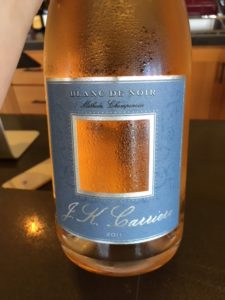 First in my glass was an insanely delicious Rosé sparkling wine, and I once again pondered the irony of coming to the Willamette to cast my snobby Champagne pallet across a range of bubbles. I believe this cuvée is not made every year, but rather only in the years that give the desired acid profile. The fruit comes from Temperance Hill, the cool 2011 vintage. Whole cluster pressed, fermented in neutral barrel, the wine is then aged for 4 years sur lattes. I fell hook, line, and sinker for its lees-y flavors and hints of oxidation alongside a panoply of pithy citrus notes. Had it not been $80/bottle, I’d surely have bought some to revisit chez moi, which is not to say the price is unreasonable … merely prohibitive. 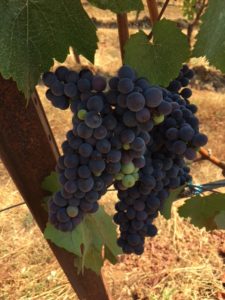 I’ve no doubt that Jim Prosser’s Pinots are the most Burgundy-like I’ve tried (from Oregon). He bills his wines as “acid-centric”, and they are. But it’s not just the acid, these wines are cloudy and delicately colored in the glass, with the green, herbal, woodsy, forrest floor notes one finds in Burgundy. Jim’s Pinots finish with a specific bitterness that immediately called to mind tasting freshly racked Burgundy. While I wasn’t crazy about the flagship “Provocateur”, these flavors came into their own in 2015 “Vespidae”. A hot, dry vintage seemed to well-suit Jim’s acid-driven style. As a confirmed acid lover, it’s strange to say that I craved more ripe, Oregon fruit, but I did, tasting Jim’s wines. Alongside this craving, was a desire to know what Jim does to make his wines so dang Burgundian. Still, the sheer quality at J.K. Carriere was unmistakable. 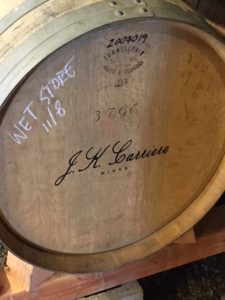 We lunched at Beckham Estate Vineyard (also on Parrett Mountain), which in this case meant a pizza truck specially commandeered for the occasion. Andrew and Annedria Beckham bought this land with the intention of building an art studio for Andrew. Their destiny took an unexpected turn in mid-2000s when they planted vineyards on their property. The estate is 8 acres in total, 6.5 planted to vine. The Beckhams also raise sheep and pigs. Andrew Beckham still teaches art at the high school in McMinnville. Yet the Beckhams claim to fame is their clay pots, and their clay pot wines.

A few years ago, Annedria brought home a bottle of Elisabetta Foradori’s amphora wine for her husband to try. Smitten by the wine, they began to research amphorae. Andrew took a look at these aging vessels, typical of parts of Italy and eastern Europe, commenting “I can make those.” And he did. Since the clay pot project began, the Beckhams have continuously worked to craft better vessels from better terra cotta mixtures. They now furnish several domestic wineries with clay pots, and are essentially the only American manufacturer of hand made amphorae. 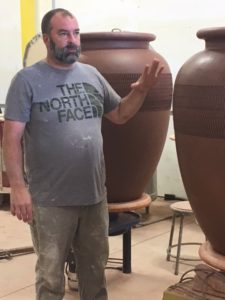 I’m a self-proclaimed amphora skeptic, and I thoroughly enjoyed the Beckham’s clay pot wines. Their 2016 Pinot Noir  “Creta”  was elegant and sleek, its aromas of clay far from over whelming, tannins in balance, delicious to the last drop, Their amphora Rogue Valley Grenache was equally compelling in an ethereal, glouglou  style. The crowning achievement, however, was their Pinot Gris, a macerated, light-red style Gris, suave and refreshing, the kind of wine that brings me around to Chad Stock’s view that Gris should be vinified red. 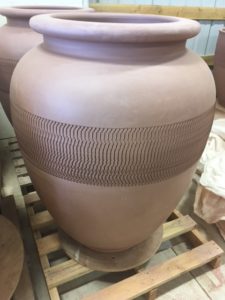 Needless to say no one was sober by the time we left the Beckham’s. And so we did what all wine professionals do at the end of packed tasting day, we drank beer.