With the Germany chronicles, I’m going to start with a visit to Jochen Beurer in the town of Stetten, and work backwards in time to trailing behind prince-among-men Gernot Kollmann in the Immich-Batterieberg cellar. Anyone who’s obsessed with wine will tell you that at a certain point it’s rare to encounter anything truly new, much less *new* and exceptionally good. Well, it happened to me in Swabia. It sounds cheesy, but the Rieslings of Jochen Beurer in south western Germany made me want to live. They made me want to dive into an ad hoc picnic on a hill in the sunset, or go for a fast, chilly run on a fall morning. They made me want to come home and tell everyone about them; they made me think “this is why I do what I do.” Of course there was the sheen of novelty, also a distinct whiff of what I call “that which can’t be said,” a vague nod to the philosopher Wittgenstein, whose work I used to love to read as a younger and brighter person. And it’s funny because of the Swabian juice I’d tried in New York (Knauss, Holger Koch, and Beurer), I’d found Beurer’s the hardest to fathom … until going there when it all began to make sense. 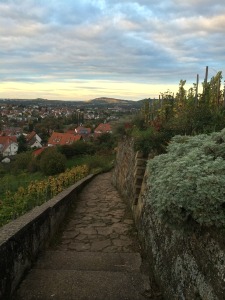 I guess Swabia is normally defined as the area around Württemberg, however it’s clear that Swabians were present — in varying numbers and at various times in history — in Alsace, Hungary and Croatia, Switzerland, parts of Baden, parts of Bavaria, the list goes on. Charlemagne was apparently of Swabian descent. The salient point for wine lovers is that Swabia specializes in dry Riesling grown on predominantly limestone soil, and red wine: Spätburgunder, Trollinger, Lemberger, and a small slew of fabricated, crossed varieties that might be fun to chuck in the Tuesday night steak blend. In landscape, Swabia reminded me of the Jura: rolling hills with intermittently dramatic slopes, greenery and woodlands. Swabia is practically next to the Jura; all you’ve got to do is drive through the Black Forrest to reach one from the other. They were both geologically impacted by the slow shifting of the Alps pressing up against their surfaces to create patchwork-y crenelations. I believe that on Jochen’s website, which I’ve linked to in the right hand margin, the terraces that resulted from soft ground and hard limestone coming into contact are called “bear noses.” It’s questionable to attempt to make a connection between the wines of Jura and the wines of Swabia, which may only share Jurassic limestone; at the same time, Andi Knauss’s Trollinger is not unlike Poulsard from Fabrice Dodane of Domaine Saint-Pierre … I’m just saying. 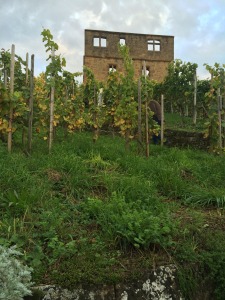 But at Beurer I was smote by Riesling, and I thought back to a lengthy, drunken argument with my original New York wine friends about which white grape variety is the most terroir expressive. Historically I argued against Riesling because of obnoxious (in my mind — it’s a personal prejudice) residual sugar and added yeast. That was before I’d tasted the best renditions of the filigreed, tangy slate of the Mosel; “slate custard” I call it. I think the truth is that like all grapes that are conduits for great terroir, Riesling as Riesling is fairly neutral, obtaining its complexity from good vineyards worked well. Jochen’s were an entirely different species of Riesling from the Mosel Rieslings I was used to: broad and full-bodied even in their lightest expression, with base-y, stony flavors, and an almost total lack of fruitiness. They were ripe wines that ranged from the lees-y Muscadet-like Schilfsandstein to the sexy, lush, Alpine Junges Schwaben Grosses Gewächs. There are different types of soil here: the porous, chunky Gipskeuper, and the chalky Stubensandstein of the area’s best vineyards. In a way it’s downright unsettling for Riesling to taste like this, but as Jochen — a thick, strong, BMX cyclist — would say, smiling, resolute: “I like it.” Best just to heed the first responses of one’s own inner voice in this case murmuring “delicious.” There was something brilliant and alluring about these Rieslings that I couldn’t quite put my finger on or find words to describe. 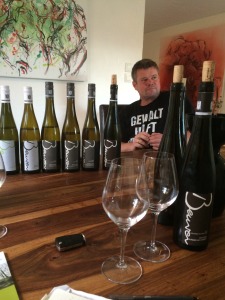 Beurer farms ten hectares of vines, and he’s biodynamically certified. He farms some vines with a horse, and he uses homeopathic treatments in the vineyard, including a charming little innovation for fighting the dreaded drosophila suzukii, which plagued many European wine regions in 2014 from the Loire Valley to Swabia. Jochen burned and scattered the ashes of drosophila insects in the vineyards. In the cellar, Jochen works almost entirely with native yeast, very long, slow fermentations on lees, and barrels for most of the wines save the ones that are intended for young quaffing. The white wines see one light filtration. 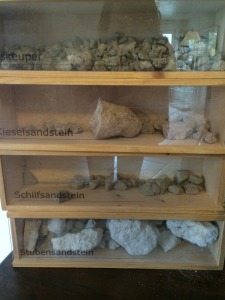 First, there was 2013 Riesling “Gipskeuper” a name for the soil beneath the limestone in some of Jochen’s vineyards. The translation is “gypsum.” It’s a waxy, porous soil found at the lowest level of the terraces that gives a medium bodied, totally dry Riesling with a salty, mouth-watering finish. The exposition is southeast, with an elevation of around 300 meters. If you didn’t move on to the Riesling Schilfsandstein, you’d think you’d arrived at a very good dry Riesling with Gips, but the intensely linear, limestone-y, Schilf made Gips seem positively frivolous in comparison. Schilf comes from 35 year old vines planted in windy conditions on finely particled and mineral rich soil. Schilf was quite Muscadet-like, and, frankly, I’ve not encountered many Rieslings I’d like to drink with oysters, which I suddenly found myself craving. The 2013 Riesling Kieselsandstein has a half a degree more alcohol than Gips and Schilf at 12%, and it’s a fuller, more mouth-filling wine with mellow blue tones, yellow fruits, and hints of leaf and flower petal. The vines here are also 35 years old, and the soil is gravely and poor, with very little topsoil. Kiesel comes from the area’s most well-known vineyard called Pulvermächer. Made in foudre, the wine takes an exceptionally long time to ferment and has lovely phenolics. As I look at my notes on these wines, I see many scribbled details: tones and shades, impressions and expletives, but literally no fruit flavors. They were resoundingly ripe, extremely high acid from the zippy 2013 vintage, and yet I couldn’t conjure an accurate fruit salad description to save my life.

Jochen’s top wine highlights the Stubensandstein you can (sort of) see in the  lowest level of the box above: breakable chunks of white limestone (“sandstein” means limestone). The old vine cuvée of Stubensandstein is labelled Grosses Gewächs (I literally cannot go into detail about German wine labeling because I don’t understand it, and the more the Germans emulate the French in designating Villages, 1er, and Grand Cru wines, the more confused I become). At any rate, both the 2012 and the 2013 of this wine were exceptional. In 2013, the wine has a lighter frame, a 14 day maceration on skins and stems, and a racy, fennel-y profile. Bottled on September 12th, the 2013 was jubilantly open for business. 2012 Junges Schwaben was the subject of some dissension in our team ranks. Initially closed, it was a chunkier wine than the 2013, and wanting a bit of acid. After 20 minutes, it came resoundingly into its own, transformed into an animal, sexy wine with layer upon layer of flavor, and an exotic, creamy finish of coconut flesh and meadow flowers. 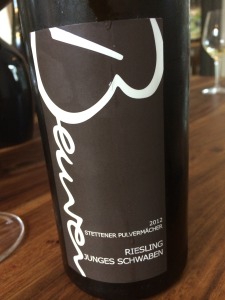 In the end, I paid this wine the ultimate compliment by asking to buy one to stuff into my suitcase. I put some money on the table and Jochen told a joke the punchline of which revolved around Swabians’ love of money. I recall it as: “How do you dig a hole in the ground?” “Tell a Swabian there’s a penny buried where you want the hole dug.” He made a digging gesture and grinned a friendly, toothy smile. It was approximately my 24th hour in Swabia; I was already smitten, and we’d barely gotten into the reds …