“Friends don’t let friends drink Sauvignon Blanc.” I used to say this, and mean it. This is a grape variety more offensive in its varietal character than Malbec, as ubiquitous in the summer months as Provençal rosé, and bearing the same sweet and sour, laboratory yeast and sulfur-juice notes that make our heads hurt and our palates rebel at first sip. This has historically been my attitude toward Sauvignon Blanc, and I haven’t been particularly quiet about it.

When Savvy B comes up in conversation, the interlocutor almost invariably probes my unequivocal distaste for this grape by asking the following question: “But what about (insert any/all of the following) Vatan, Cotat, Dagueneau, Clos Roche Blanche, Chavignol?” To this uncreative yet nonetheless valid recalcitrant case construction, I reply that I love Vatan, and Clos Roche Blanche, that I’m happy to taste Cotat and Dagueneau given the opportunity, and that Chavignol is undoubtedly a Great Terroir. So, yes, there are Great Wines made of Sauvignon Blanc. In fact, I’ve often had a sort of “it’s me, not you” attitude toward this grape. Most of the really good examples of Sancerre and Pouilly-Fumé that I’m supposed to like, I still don’t like. It’s almost exactly the way I feel about female vocalists. There are a couple I like, but in general, sonically, I don’t like the sound of female voices raised in song. This is clearly my problem. In wine, as in music, there’s very little that’s objectively true; our opinions are just that: matters of taste.

Enter 2016, a year of remarkable open-mindedness, enjoyment of being wrong, and subsequent overhauling of opinion. I’m thrilled to report that the wine I’m most excited about in the MFW portfolio at this moment is not a sous voile Savagnin (though we have one, and it’s stunning), nor is it a Brut Nature Champagne (we have those too, also sensational), but rather a Sauvignon Blanc from Oregon. 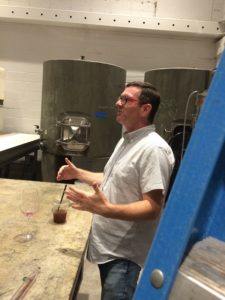 But let me start from the beginning, at Bow and Arrow. One sunny afternoon in late June I found myself in Scott Frank’s winery in Portland. We’d been out wandering the Johan vineyard and had returned to the winery to taste Scott’s most recent creations out of tank and barrel. As we got started, Scott said something I can’t remember verbatim, but to the effect of “Sophie, I know you’re going to laugh at me; I made two different Sauvignon Blancs, and they are the best wines I’ve ever made.”

Now, I am fortunate to enjoy an honest and genuine rapport with Scott, which dates back to my time doing national sales for Selection Massale, when he often didn’t have much to go on in formulating his orders except my word, and the track record of the winemaker. In our current mode, I sell wines that he makes, rather than him selling wines that I represented (as was our arrangement at this time, last year), and we continue to understand one another quite well. The last time he told me “this is the best __ I’ve ever made,” he was speaking about the 2014 Hughes Hollow Pinot Noir, from a vineyard he’d blended into his basic Pinot until it began to show so well he felt obliged to bottle it separately. The wine is fantastic. This is a roundabout way of saying when Scott says something, I listen.

As he dribbled wine into our glasses from the pipette, he began to explain that he’d been inspired by Marc Deschamps in Pouilly-Fumé to make a ripe, barrel fermented, barrel aged Sauvignon Blanc. He told me later in email “this results in a more meditative wine with aromas and flavors you don’t typically find in the “International” style you now find dominating the market.” He’s not alone in believing that when Sauvignon Blanc gets ripe, it sheds its fruitiness (and with that all the grapefruit and grass and gooseberry and cat pee and lemon/lime tang we associate with this grape), and takes on more savory character. He calls it a “textural” style, and tasting the wine I knew what he meant. The alcohol is higher than the standard 12% for Savvy B from the Loire Valley, and of course the wood lends a further textural component.

We didn’t speak about this in reference to Sauvignon Blanc, rather in reference to Melon de Bourgogne, but allowing the wine to go through malolactic fermentation also makes a big difference. Clearly the malo itself will change the character of the wine, making it richer and more lactic be it butter or cream, but additionally when the malolactic fermentation is blocked with sulfur, this will influence the resultant wine. As I understand it, to stabilize a wine without malo, to keep it from potentially undergoing malo in the bottle (not good), you need at least 60-70 parts per million of SODeux. While this isn’t a lot in the grand scheme of things, it’s a perceptible amount, enough to give the wine that mouth-coating aspirin flavor that mingles with the wine’s acidity and minerality. I’d go so far as to say that most of the classic French Sauvignon Blanc we taste is made this way, with shrill acidity that many people like, and sulfur masquerading as minerality.

But I digress. We tasted two 2015 Sauvignon Blancs that day. The first was from Union School, a vineyard in the southern Willamette Valley composed of alluvial clay soil from the Missoula Flood (Oregonian winemakers love to talk about the Missoula Flood). This wine is raised 80% in barrel (fermentation and aging, 30% new), and 20% in stainless steel. After crush, the juice is left to macerate on the skins for 48 hours. The result is a rich, expressive wine with notes of black tea, lemon cream, pineapple, waxy lanolin, not a grapefruit or a gooseberry to be found.

It wasn’t until the second Savvy B that Scott’s points about ripeness and texture really came to fruition. Called “La Chênaie” (spelling?), the wine is from Eola-Amity, a terroir that promotes even more ripeness and a bit of botrytis.  The wine was extremely savory with notes of beeswax and cashew. It’s a totally atypical expression of Sauvignon Blanc, and one that should be cherished. I can’t wait to drink a bottle or two of this wine once it arrives.

The wine that actually inspired this post is 2014 Minimus Sauvignon Blanc SM1 from the Stella Maris vineyard in Applegate Valley. A couple of weeks ago, apropos of customer requests, I took out a lineup from Minimus. For those unfamiliar, Minimus is the experimental project of Chad Stock, a fascinating and eccentric winemaker with experience in many sectors of the industry, and certainly a gift to the trade. The Minimus wines are wild. They are never the same, because Chad doesn’t repeat his experiments. They are wines that are thrilling to try, thought-provoking and cerebral, and yet not always wines I want to drink a bottle of. Chad and his business partner David make three brands: Omero (a sort of monopole; their entry level brand), Minimus (Chad’s experimental wines, the notes from which he plans to compile into a book about winemaking), and finally Origin (the highest end, concept pieces that focus on single terroirs, clones, and more subtle aspects of winemaking). The Minimus wines are the most unusual, but all are very well-crafted, and 2015 Omero Pinot Gris is a wine that has occupied a small slot in the back of my mind for two months, now, popping into the forefront every few weeks to provoke an email to my bosses asking when the wine will arrive. 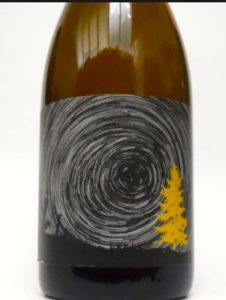 Like Scott’s, Chad’s is a ripe expression of Sauvignon Blanc. It sees a four day long maceration on the stems and skins with the idea of extracting green qualities from the stems (not to be confused with the “green qualities” that attend less ripe, grassy Sauvignon Blanc). Chad explained his decision-making this way: “With all of my wines I try to balance out the fruit components with savory, reductive, earthy, green, and/or bitter elements to provide a counter point to the fruit. I also like my whites to be tannic and structured which I achieve with this technique.” This is not an orange wine, by any means, but it is a phenolic wine, a wine with a deep sensation of skin and stem. It’s 14.8% alcohol, but has beautiful, mellow acidity. I find the true genius of Chad’s creations to show on the mid-palate and finish. If the front end of this wine is savory, green, and phenolic, the back end seems to reach yet another dimension of flavor that includes rich, ripe stone fruits that dance across the cheeks and the back of the mouth. I thought about this wine with every sip, and for days afterward, like a craving. I raved about it to all who would listen. It brought a smile to my face and a surge of energy and enthusiasm to my work. As the voices of Janis Joplin and PJ Harvey may not be right for Taylor Swift listeners, this wine will not be for everyone, but for me it was a revelation. 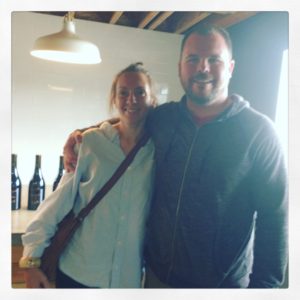 And so the utter transformation of a person who councils friends against drinking Sauvignon Blanc, to a person who says to them “you must try this; it will blow your mind.”