Reflections on travel, home, and 2018 Division-Villages.

Change is in the air, and has been since March when we decided to relocate from Fort Collins, Colorado to Chapel Hill, North Carolina, essentially trading a laid-back western college town for a bucolic southern one. Our reasoning was rooted in money and setting the stage for lives not lived paycheck to paycheck. We love Fort Collins, and would have been content there for years to come, but my family property in Saxapahaw pulled us back east like a magnet in over drive, dragging us first across Kansas, then Oklahoma, Arkansas, Tennessee, and finally to the triangle of North Carolina.

Our cross country journey warrants its own chapter, the ‘Jesus Saves’ plains of Kansas down to the rolling hills of Oklahoma, bafflingly speckled by oil dinosaurs and wind turbines, as though doubling down on energy whatever the source, through the Ozarks and Little Rock listening to a timely Slow Burn podcast about the impeachment of Bill Clinton, greeted by a torrential down pour of not just rain but vehicles and pot holes and twangy southern voices on I-40 in Tennessee.

Sap that I am, I shed a tear crossing the TN/NC border just west of Asheville, humble mountains after the imposingly majestic Rockies. Finally, after 11.5 years, back home to the soft, moist air, lush, green foliage, and pale, dyed Easter egg blue skies of the south. Western NC towns flew by: Hickory, Lenoir, Statesville, Taylorsville, Wilkesboro, home of papa’s Dixiecrat Scotch Irish ancestors, the half of me I’ve never known and always swept under the rug out of embarrassment. We arrived in Chapel Hill after 3.5 days on the road, if not to a new place, at least to a new chapter.

People ask how it feels to be back. The truth is I don’t know yet. So much has happened and so quickly. A few weeks after I arrived, my maternal grandmother passed away at 96 years young. That’s the liberal, intellectual, civil rights activist side of my family, the known side, the side I’m proud of. She was my last progenitor, and my only relative in North Carolina. So now here I am, tied to this place by what exactly? History, memory, patrimony, and a single concrete thing: land.

In a former wine life, when work brought me often to France, I admired the connection many vignerons have to their patrimony. Now I have the chance to live my own version. I hope it’ll feel good, while knowing it feels necessary. Maybe that’s how vignerons feel, like they don’t have a choice, like they’re responsible for something bigger and longer-lived than themselves. To some extent that’s how I feel. The American inside, doing as she pleases every minute of every day, is duking it out with this strange new human possessed of a desire to honor her ancestors and be part of something greater than herself.

We moved across the country during the busiest time of year for wine sales, which means that the moments not spent relocating, were spent working national markets from California to Georgia. I kid you not, dear reader, when I say that in the month of April, I touched down in 11 U.S. states. Keeping me company during this hectic time, were the 2018 Division-Villages wines. Fresh faces in California in early April, by the end of the month in Atlanta, they’d become tried and true friends.

For selfish reasons, I am particularly excited by these wines, this year. Yes they are delicious, companionable, and seem to sell themselves, but additionally 2018 was only the second time I’ve experienced a vintage first hand. (The first time was 2014 when I spent the harvest in Arbois, Loire, and Mosel.) In the fall of 2018, I spent many weeks in Oregon. I was there for the cool rains in the third week of August that set back the harvest dates. I was there for the warm, dry days that followed, ripening the grapes to perfection. I’ve been watching these little nieces and nephews since birth; they make sense.

White watermelon and strawberries on the fringes of ripeness.

The 2018 “L’Avoiron” Rosé of Gamay was fashioned a little differently in 2018: direct press, no maceration. It’s paler in the glass than last year’s, more straightforward. It’s heftier than the 2017 (13% versus 11.9%), yet at the same time more sheer and white-wine-like. It’s salty mineral forward with white watermelon close to the rind, pinkish green strawberries, and rhubarb. If quick sales are the ultimate barometer of deliciousness, then this might be the best wine Division’s ever made! I confess to harboring a soft spot in my heart for the 2017, which was geekier, with more phenolic notes and a whiff of enticing oxidation. People tell me the 2018 is better, and I suppose it is. Who knows? I generally root for the underdog. 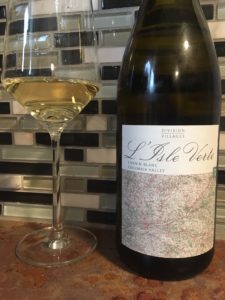 Mossy driftwood afloat in the ocean.

Following L’Avoiron in a lineup comes the 2018 “L’Isle Verte” Chenin Blanc. I’ve loved every vintage I’ve tasted to date of this wine. It speaks to the clear quality of the 40-year-old Chenin vines at Willard Farms in the Yakima, as well as to excellent winemaking on the part of my bosses, Kate Norris & Tom Monroe. Sometimes this wine carries a kiss of residual sugar. It can have a sec tendre vibe. In 2018, there is no discernable sugar and the wine feels ‘clawed from the earth.’ When my dude sniffed it (he doesn’t drink), he told me it smelled like a mossy, mushroomy log floating in the ocean. “Really? Awesome!” I replied. That was just after bottling, and the wine is more well-knit now. Still not a fruity wine by any stretch, it’s morphed into salty, preserved lemon scented, stern beauty, Chenin for oysters and humid days. 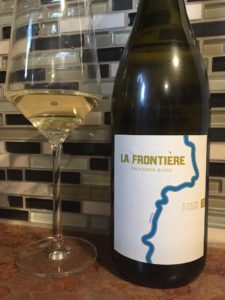 Sweet green sugar snaps against a backdrop of exotic fruits.

Next I like to pour the show-stopping 2018 Sauvignon Blanc “La Frontière”, which is pleasure from start to finish. I’ve learned one or two things about Savvy B since I started selling Oregon wine back in 2016. It seems the most important decision of all is when to harvest in order to attain the desired profile. Tom & Kate let the grapes hang long on the vine to develop riper flavors, hints of pineapple, the faintest floral, orange and yellow fruits reminiscent of apricot and mango. This wine offers a beguiling mingling of green and orange. The typical herbal or grassy quality of Sauvignon Blanc manifests itself in fresh, sweet sugar snap peas. The wine has 5 grams of residual sugar and extremely high acid. Crying out for Thai curries, it’s feinherb Sauvignon Blanc and it tastes freaking great. 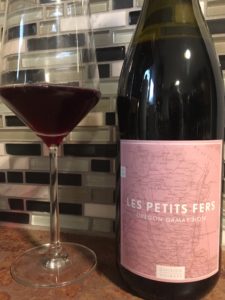 Per usual, my personal favorite of the reds is Gamay “Les Petits Fers”. Much like L’Isle Verte, this wine is always excellent. With some 60+ percent cool, whole cluster carbonic maceration, it tastes like Beaujolais-Villages. The aromatics veer toward classic Gamay notes of strawberry and white pepper. The white pepper carries through to the finish, which is pleasantly chalky and structured. I find this wine, indeed all the 2018 reds, to be riper, bigger-boned and grippier than last year, with a clarity and purity of fruit that takes me back to that third week of September when the sun was shining, and winery staff were at it ’til 2am. 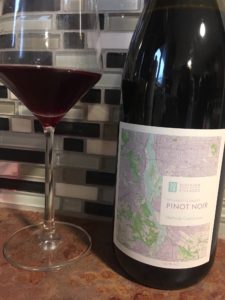 Pinot Noir “Méthode Carbonique” underwent a little rebranding in 2018 with a label change. The new label alludes to the dark, purple, brambly fruits in this wine. It’s helpful to have parity between label and contents, and the prettiness of the new label reflects a pretty wine beneath. Initially nosing it, I’m swept up by carbonic aromas: Amaro-like bitter herb and spice notes with a high-toned hint of cola. Second and third sniffs reveal a core of classic, dark Willamette Valley Pinot. This year, there’s some Yamhill Carleton fruit in the blend, which lends a touch of welcome burliness to the wine. However to my palate, the biggest difference is that this year’s wine is squeaky clean. In 2017, the wine had what one customer described as “that French funk”, by which I believe he meant brettanomyces. Of course the wine’s cleanliness may not be a selling point for every customer. Some of the natty-heads have expressed a preference for last year’s wine, but most tasters have been quick to embrace this vintage’s dark, sleek purity. 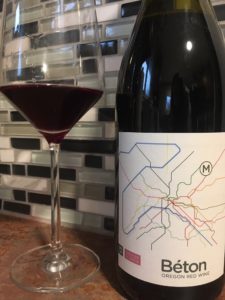 Blackberries with seeds, plums, and cassis for days.

Last but not least, “Béton”, Division’s concrete-aged, Loire Valley style blend. As anyone who tasted last year’s Béton knows, in 2017 the wine had smoke taint. I’ll abbreviate the saga of last year’s Béton by saying that in the beginning, the wine was redolent of Mezcal and cigar ash, but by the end, the excessive smokiness had mellowed into a sort of hickory smoked barbecue and roasted poblano note. The wine had fans! Lovers of Isla whisky, taco-eaters, wood-fired pizza joints, revelers in a good campfire! Enter 2018. Folks who didn’t like 2017 Béton are gun shy. Folks who loved the smokiness last year miss it in the new vintage. There’s no doubt that the 2017 vintage did strange things to the brand. The fact remains that 2018 Béton is better than ever. Dominated by purple plum, blackberries with seeds, and hints of black currant, the wine shows abundant primary fruit and is particularly tasty right out of the fridge. There’s even a faint smoky note at the bridge of the nose and late finish. 2018 Béton matures with each passing week, becoming earthier and losing its sweet, primary fruit. What can we say? We like consistency, but remain slaves to vintage variation and wouldn’t have it any other way.

There you have it, dear reader, a story of travels and adventure on the road, accompanied by a fine roster of Oregon wines like still points in a turning world, or at the least a tried and true soundtrack to one human’s life in flux.