On a positive note: Falkenstein!

What does it mean to be jaded? A decade in this wine gig, and my idealism is in tatters. The passion of the first 5 years is basically gone, and I’m pretty much just interested in the quotidian tasks that pay my bills. Only one objective truth remains: some vineyard work is better than other vineyard work. The rest is just a matter of taste: white or orange or pink or red, sparkling or still, oaky or not, old or young; there’s no right or wrong. I’m through chasing the holy grail of great, obscure, or esoteric wine, tired of endlessly discussing the quest. I can’t even remember the last time I cracked a wine book (oh wait; it was David White’s But First, Champagne!), and going out for non-work-related meals fills me with resentment. I’d rather be home with the cats …

These were my thoughts as I wandered west Harlem Sunday morning, the hot, late summer sun further dappling my shoulders, the chatter of Hispanic families en route to church filling the air, their exotic perfumes wafting behind. This is why I can’t write a good blog post to save my life these days, I thought, because I’m no longer on a mission. I’m just doing a job.

The political climate has more than dampened my spirit. The present drama in our government has made pretty much everyone I know feel powerless, scared, enraged. We’ve also lost any self-importance we may have had. We grasp that our work is totally trivial in the face of the unrest in our world today. Rome is burning. We are a luxury, niche market, a market that thrives in specific cosmopolitan bubbles, a market that has nothing to do with large swaths of America where dinner out is consumed at Chipotle or Panera Bread in a strip mall, after which you get in your car to drive home and consume another few hours of pre-packaged entertainment before going to bed. Many places in this country have no independent restaurants! People eat at fast-casual chain restaurants, every day!

I dislike myself as I type, try to abandon the judgement, the snobbery that attends the words. No matter how much I try to suppress it, snobbery born out of years in the bubble bubbles to the surface. But then I have another gut reaction, something along the lines of: what’s the fucking point of any of this if I can’t touch people outside the bubble? I’m not interested in the bubble. I know the bubble. I am the bubble. What’s the point if every wine sermon is preached to the choir? I’d like to be out, talking to people who think differently and drink differently, even if it means missing the latest release of the next hip thing, or possibly sharing a meal with a republican.

Two of the more thought-provoking drinks I enjoyed on my recent vacation were sipped on the patio of a mall in Irvine, California. I had not had a glass of wine in a week, and was resolved that if there was something potable on the menu (doubtful) at a Trattoria next to the Macy’s, I’d order it. To my surprise there were several potable beverages, and I had a glass of Spreitzer Riesling followed by glass of Monte Bernardi Chianti. Sure the Spreitzer was more sulfury than I’d have liked, and the Monte Bernardi was just too damn clawed from the earth and soulful to pair with the sterile, shiny, oh-so American glitz of southern California, but the point is that here was an intersection between the niche industry I work in, and the everyman world in which most Americans drink and dine. On some level those two glasses of wine were more interesting than the last somm-praised white Burgundy I nosed, the latest cool Pet-Nat, or over-priced Foillard I swished and spat.

These are dark political times, and for me personally, these are — not dark — but transitional times in my relationship with wine and the trade. But there’s no point further dwelling on the confusion. I read and watch the news every single day, and until the 2018 election cycle heaves into view, I don’t know what I can do beyond remain active and informed. Certainly when it comes to doing my job, it’s better to focus on the positive. I’ve read about the “atmosphere of buying,” and to cultivate that, you need a positive attitude, and a big shiny smile. So. What has inspired me recently? What is there to be positive about? I asked myself. What has cut through the mire? What is better under Trump than it was under Obama? The answer? Falkenstein. Erich and Johannes Weber of Hofgut Falkenstein made the best wines they’ve ever made in 2016. And I visited them for the first time in May. 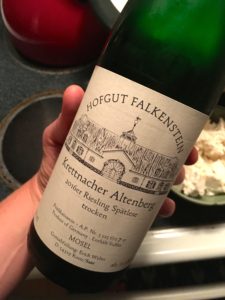 My partner in crime, Amanda, and I had slept at Immich-Batterieberg the night before, and Gernot put us in a room together, which resulted in a slumber party-esque giggle fest that lasted until 4am, so I was a little loopy driving from Enkirch to the Saar. It didn’t help that German roads confuse the crap out of me, and there seemed to be no correspondence between my gps and the road signs. But eventually we made it, half an hour late. 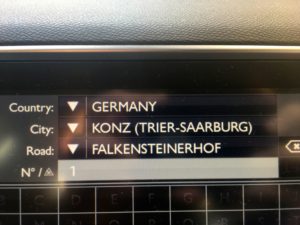 They got a road named after them.

It was a glorious day: temperatures in the 60s, the sun shining, the sky purest blue. Erich promptly told me to put my notebook away, and I’ve never regretted my lack of notes from the visit, which washed over and through me like a cleansing tonic. Why was it not so important to take notes that day? The wines of Hofgut Falkenstein have a particular character. Each vineyard has a personality, likewise the vintage has something to say (please read Cari’s article for more details on the 2016 vintage, and subscribe to Lars’ website); the ripeness level establishes a specific pitch in which the tune is sung. It’s all right there. Once the variables are established, we know more or less how the wines will taste. Furthermore my scribbled notes could no more approximate the glory of the 2016 vintage at Falkenstein than my shitty photos do justice to the beauty of the day.

For the first hour, we stood in the Niedermenniger Herrenberg, talking, Johannes a bundle of energy as always, Lars, calm like an older brother, Erich a new entity, cracking jokes, making classical music references, and gently chiding us for spitting.

Ever popular with the ladies …

If it’s possible for a wine to act as caffeine, the 2016 Niedermenniger Herrenberg Kabinett Trocken did so. This wine is etched in my memory because it was consumed amidst delightful breezes and the vines that gave birth to it. The NHKT is important to the Webers; they make it virtually every vintage; it’s sort of a workhorse wine, one that speaks to their house style. It’s not flashy. In general Rieslings from the Herrenberg are less flashy than Rieslings from the Euchariusberg (the Weber’s other significant vineyard). The Herrenberg gives herbal, mellow, blue fruit, lemon and lime, less of the impressive, kaleidoscopic stone fruits and tropical notes that characterize the Euchariusberg especially in riper iterations. This is the perfect morning wine, I thought, watching a cat sunning herself between the vine rows, a wine that nourishes and revives. 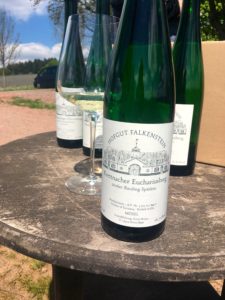 Tasting in the Herrenberg.

We continued to taste, up to the Auslese level. In 2016 the PHs weren’t as low as they were in 2015. However, the vintage was less ripe overall than 2015, which means that even though acidity was higher in 2015, the wines feel higher acid in 2016. Does that make sense? Ah Riesling. What would we do without you? Johannes’ eyes grow huge with excitement when he speaks about PHs of 2.6-2.7. 2016 is a superior vintage for Auslese … and for Spätlese, and the drier wines are none to shabby! We ate a marvelous lunch prepared by Mrs. Weber. We toured the cellar examining and sniffing the fuders.

I was shocked to learn when Johannes visited last year that the Webers do not use any tanks of any kind in their cellar. The fermentation and élèvage take place in old barrels; they make the wine as they’ve always made it. Native ferments, no inert vessels. Why is this surprising? Because the wines are so zesty, crisp, and clean, which doesn’t — in our minds — square with élèvage in barrel. These wines never taste like barrel, but rather — regardless of the Prädikat — like a procession of crunchy, tangy fruits, and slate-y minerals dancing along a taut wire. 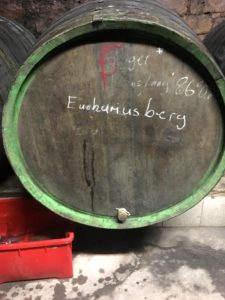 In 2016, the Webers bottled a couple of single-fuder wines. Just when you thought German wine couldn’t get any geekier!

After lunch we went to the vineyards. (In fact we went all the way to the Scharzhofberg to gaze down upon Egon Müller’s fabled winery.) The Weber’s vineyards make a kind of bowl, half-circling the villages of Niedermennig and Krettnach. (The Scharzhofberg is just a bit further on.) First we looked at the sun-drenched Sonnenberg vineyard. Then we hopped out of the car and walked up the Euchariusberg, high and steep with lots of old (and somewhat frost bitten vines).

Finally we arrived at the Krettnacher Altenberg. We decided to stop here and taste the 2016er while overlooking the vineyard. For me, this wine had been an outlier in the lineup. Typically Herrenberg produces great dry and Feinherb wines, while Euchariusberg produces profound sweet wines. The Altenberg does what it wants. In 2014 it was Spätlese Trocken, and that particular marriage of ripe aromas and total austerity brought it some fans. In 2015, it was Spätlese Feinherb, and considerably sweeter, which of course pleased some and not others. In 2016, we’re back to Spätlese Trocken, and the wine has come into its own. Where the dry wines of Herrenberg are delicate and filigreed, the Altenberg is big and bold, like a pillar, unapologetically intense and packed with material. 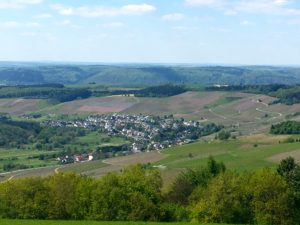 There is no way to do photographic justice to this landscape

Naturally having had this scenic epiphany overlooking the Altenberg, I could not wait for the wine to arrive in New York, which it did a few weeks ago. Last week I had the pleasure of showing it one day, and saved half the bottle for the next — always a good strategy with young Riesling. On the second day, it took me back to the verdant slope; it captured my attention as fully and completely as it had on a May afternoon with Johannes, Lars, and Amanda. It took me away from the politics, for a moment pulled me out of the shit. This is why I do what I do. The wine brought hope and satisfaction, satisfaction qualitatively, and bizarrely akin to listening to republican congresspeople speak out against the president. It was quite miraculously restorative.