Until recently, I could run away anything. I’d throw my shoes on Sunday morning and hit the streets, usually for somewhere between 7 and 10 miles, and by the time I arrived back home, the bad feelings would be gone, at least for a few hours. I’d listen to some ’90s hiphop or disco, maybe some mid-2000s new wave garage rock, and pound the angst away.

Then something changed. Last summer, I tried to run the prospect of a visit to the cardiologist away, and it didn’t work. I ran all the way from 151st and Riverside to Chambers and the westside highway, and still felt like shit. Why?

I used to think running made me feel good because the brain releases posi-brain-chemicals during and afterward. These are like posi-vibes only instead of being released over beers with friends, they’re released over miles of strenuous exercise. I’ve realized, though, that running made me feel good because it gave me control over something: myself. When there’s chaos outside, we retreat inside, to our bodies, where we’re in charge.

Since Trump, the chaos has been so all-encompassing that running no longer delivers a still place in the turning world. I feel naive — like I should have known (for example) how alive and well racism is in America, but I didn’t know because I attended Quaker school, the first integrated school in North Carolina, because we had Obama for two terms, because I told myself that America was going in the right direction for those who share my values.

Our current political meltdown has created a sort of ethical-philosophical huevos rancheros in my brain, the primary ingredient of which is utter powerlessness to hinder the march of this deranged administration; toppings include rage and fear. What does one pair with feelings of chaos and powerlessness?

Since moving to Colorado, I’ve taken up several nostalgic activities: things I did to improve myself and pass time holed up in rural North Carolina as a child, before the wine business, before New York, before Trump. One of them is practicing the piano. A few days ago I was butchering Chopin’s Nocturne in Bb Minor, Opus 9, No. 1, when I came across notes on the music, written by my beloved piano teacher of 10+ years, Carrie Monnette. “Mist ….” in her upright cursive “distant light”. Minor epiphany. When looking forward strikes fear, look back. Reliving moments of innocence (remember when George W. Bush was the worst Republican we could imagine?) and living moments of sensory beauty are effective balms for an anxious soul. 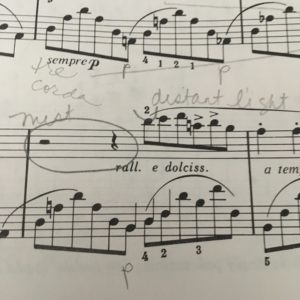 The vinous equivalent of mist over the lake at dawn in the Adirondacks, distant light of the day’s first Jetski shimmering through as Chopin reiterates a haunting melody in sotto voce … is of course Riesling from the Mosel-Saar-Rüwer: wine that delivers pure sensory beauty, wine that enables us taste colors and feelings in addition to fruits and stones, wine that seems innately to possess the flavor of sweet, sad nostalgia.

My Riesling binge began with 2016 Falkenstein Niedermenniger Herrenberg Spätlese Feinherb, a wine that is, in my opinion, one of Erich and Johannes Weber’s greatest successes in the 2016 vintage. Herrenberg is the Weber’s top site for dry wine. It gives us bracing Kabinett Tröcken, Weissburgunder, delicate Kabinett Feinherb, and other glorious examples of Falky deliciousness. To me, wines of the Herrenberg are tensile and green, like walking in a dewy meadow with stops along the way to smell the crocuses and pick a few wild blueberries. 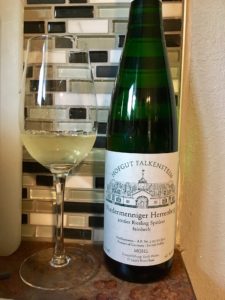 When I first got to know these wines, I preferred the Euchariusberg vineyard with its show-stopping Spät and Auslesen. Now, I prefer the subtlety of Herrenberg. Spät Fein is bottled in magnums, and the 750 production is tiny. At Spätlese ripeness, but Feinherb sweetness, it’s dense, powerful, yet airy nectar that coats the tongue in a sapid, stony film. 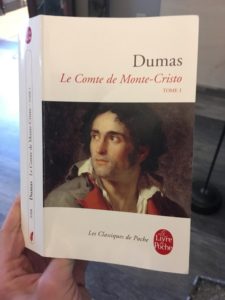 Ambling at a leisurely pace through Le Comte de Monte Cristo in French has also proved effective balm for the politically incensed heart. As an adolescent I was obsessed with the French Revolution. Le Comte de M-C takes place in the years of Napoleon’s exile on the island of Elba. The historic events are fascinating, and the novel is full of back-stabbing shenanigans, fearless heroes and dastardly villains. It’s gratifying reading the book in French, stumbling upon sentences like this one: Je vous demande pardon, ma mère, dit une jeune et belle personne aux blonds cheveaux, à l’oeil de velours nageant dans une fluide nacré … (“I beg pardon, my mother, said a young and beautiful person with blond hair and velvet eyes swimming in a pearly liquid ….”)  I hope to start writing like Dumas.

The Riesling binge continued with 2016 Stein Weihwasser Feinherb. Weihwasser means holy water, and this bottle is truly divine. I’d drunk Weihwasser before, but did not recall it being so extraordinary. I remember this wine as primarily refreshing, with a hint of sponty reduction and a core of zesty citrus fruit. Imagine my surprise when the wine was gorgeously aromatic, marked by the same walk-in-the-meadow vibe as the Falky, but more delicate and lacy, less powerful and ripe, tense and nervy, but soft like wild rose petal and iris, perhaps a hint of lilac … 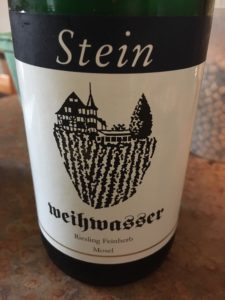 I don’t know Ulrich (“Ullie”) Stein personally, and so I went down a bit of a rabbit hole researching this estate. It seems Ullie is somewhat of a fanatic whose specialty is restoring ancient, barely workable sites in the Mosel that are prohibitively steep and in danger of going fallow because no one wants to work them. In other words, he specializes in labors of love. It’s inspiring both to drink this man’s wine, and to read about his noble work preserving some of the Mosel’s best and oldest terroirs.

Continuing in the 19th century vein, I’m re-reading Crime and Punishment for the first time since college. The aura of this book is dark and weird, ironic and bleak. Its genius lies in its ability to seduce the reader into pondering the nature and repercussions of freewill. This is one of the first existential novels, and its haunting depths are more resonant to me now than they were when I was young. (Plus C & P makes an interesting contrast to the bright-blue-sky-with-cotton-candy-clouds look that Colorado seems to wear every damned day of the week.) 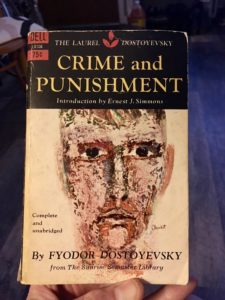 Stein-ing made me curious to open a bottle I’d been eyeing in the wine fridge: 2015 Weiser-Künstler Enkircher Ellergrub Kabinett. I approached this bottle with minor trepidation. 2015 was a sun-drenched year in the Mosel, and the resultant wines have been ripe for my taste. Falky and Stein were 2016s, and “Feinherb”, which means “off-dry” (and makes for fun punning when one considers the amount of fine herb lining the dispensary shelves in the great state of Colorado, as well as the natural symbiosis of Riesling and marijuana). Unlike most German wine words, which are bound by regulations, Feinherb is the winemaker’s impression of off-dry. Thus there is lots of variance in sweetness between Feinherb wines. To read more, see Lars’ article on the subject. For me, Feinherb is often the perfect balance. Anything sweeter and I’m compelled to stop after a glass or two. 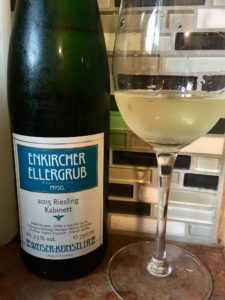 The Ellergrub is an incredible site.

The Wei-Kü was traditional Mosel Kabinett. At 7.5% alcohol (versus 11-ish% for the Feinherbs) this was a sweeter, riper wine. Many Riesling obsessives take the position that sweet wine is the apotheosis of German Riesling. With residual sugar, the panoply of flavors broadens, the tongue tolerates even more razor sharp acidity, the wine becomes longer lived. And so what if I harbor a quiet preference for dry and off-dry? Does that make me deaf to the ultimate tones of great German wine? Perhaps.

As predicted, the Wei-Kü was an entirely different experience, as though I’d passed from a dewey morning to a delightfully warm afternoon. With a year of additional bottle age, the Wei-Kü showed flint, smoke, and petrol on the nose. Where the Feinherbs were green and blue, the Kabinett was green and gold, like a ripe grape barely flecked with brown. The palate was relentlessly crunchy and sheer to the finish, which delivered a pinch of skin tannin and a mouthful of rhubarb.

I was momentarily transported as I sipped to May 8th of last year, an enjoyable ride through Alsace into Germany with Amanda Smeltz. It was dusk when we arrived at Weiser-Künstler, but we were nonetheless received for a memorable tasting and a quick peek at the sleeping fuders. I found a clue in my notes from the visit. Konstantin told us that over the past few years they’ve been forced to harvest earlier because “rot is coming …” Early picking gave the wine incredible freshness and filigree; a ripe vintage gave it succulent fruit. It was a rare bird: a classic Kabinett that had not passed into Spätlese territory. It was certainly no less delicious than the Falky and the Stein for its sweetness, and with pleasure I corked up the bottle after two small glasses to return to the next day.

To those few who made it through this long and meandering post, I say: let us enjoy as much beauty and Riesling as we can in the moment, and if looking forward for inspiration seems futile, look backward, a distant light just might emerge from the mist.