Yesterday I drank some Oregon Chardonnay; I wandered the sultry city in the first throes of summer; I poured a tasting for the rosé-thirsty inhabitants of Soho, and I took part in two rants about wine writing. Both of my interlocutors were smart women with a decade of experience in the industry who write well, who write for their jobs. These rants were different in character, yet both orbited the notion that there’s not much being written that is compelling to wine professionals, and this aggravates us. It’s an age old conversation, one that I’ve had many times with my dear friend Zach Sussman, who is a wine writer. When Zach and I started talking about the industry’s hostility toward wine writers, the idea was that he’d write about it for a widely read publication like Punch, and then finally there would be something out there of interest to the industry! But there was a sense that the topic would not be well received by his editors. (After all, it’s a bit self-undermining.) However, I’m still holding out hope that this piece gets written, because Zach would do justice to the topic.

I tell myself that the industry isn’t the audience, and confess that I don’t read about wine, with the exceptions of Bert Celce and Zach, and occasionally others when I have to for my job. My close friends in the trade rarely read this blog, and that’s fine, but apropos of this fact, if I’m becoming a hack, if I’m not saying anything of interest to my friends, I might as well either stop writing the damn thing, or try to change its identity … This was something I started thinking about at Rosenthal, and still find it’s not a bad idea. The Rosenthals weren’t too keen on me writing a wine blog while in their employment, and I toyed with the idea of changing it into a sort of lifestyle blog with occasional comments on wine. We’ll see.

The genesis of Sophie’s Glass was a car conversation with Zev Rovine, in atrocious traffic, on the outskirts of Paris about 5 years ago. Zev asked me what I ultimately wanted to do in wine, and I told him I wanted to be a writer. He responded that I should start with a blog. There was also an aspect of utility: whenever I visited a hyped producer like Ganevat, my customers at Chambers asked for my notes on the wines, and it was easier to document them in a blog that I could link to, than to rewrite the same email over and over. So those were the motivations. Now, I no longer want to be a wine writer, and notes from my winery visits circulate internally to give our company more robust and accurate information about domaines and producers. So why keep writing the blog? I like to write. It’s self indulgent, and feels good.

What I started to say pre long-digression-about-wine-writing is that these conversations with peers brought me back to questions I ask myself constantly these days: why am I doing this? After ten years in the business: what next? What is there to be excited about going forward? What is there to bring back the thrills wine brought me between the ages of 25 and 30? Tasting good juice, making sales, going to restaurants, enjoying exquisite pairings is wonderful, but it’s not enough for me; there has to be more intellectual sustenance. I say this partly because though the lifestyle looks glamorous, it’s taxing, and one has to make a concerted effort everyday to remain healthy, stable, and balanced. Drinking is exhausting; I’m sick of it and often don’t want to do it. Having to do something for work that most people do for pleasure is confusing. And frankly, though I’m okay with being a 35 year old woman in the wine business, the prospect of being a 50 year old woman in the wine business doesn’t thrill me. Being rational and pragmatic, I try to conjure an image of a future in the trade that would work for me, and plan to try to ensure it happens.

Pouring Division-Villages Beton and Rosé “L’Aviron” on a hot night in Soho.

One sure fire way to remain engaged in the industry, coming up with positive responses to the questions “why” and “what next” is to learn about new winemaking places. Inspiration comes when you least expect it, and from the most unlikely sources. Just going to throw it out there that I am presently very excited about wines from the west coast of the United States. A couple of weeks ago I spent the day with Kate Norris of Division, a winery in Oregon, and it was blissfully enlivening. I love these wines. At one point, Kate said (and I don’t remember the context) “oh I HATE it when the wine’s not delicious”, which struck me as a perfect summation of the governing philosophy of this winery. It’s nice when wine is cerebral and complex, but absolutely essential that it be delicious. And the early release Division-Villages wines are just so damn delicious; they have roughly the fruit/acid balance of cool climate French wines, and feature those grapes: Gamay, Chenin Blanc, Cabernet Franc, Côt, Pinot Noir. There’s a warmth to the fruit that lets us know we’re not in the Loire, yet a freshness, a juiciness to the acidity that lets us know the people who craft these wines (Kate and a guy named Tom who I look forward to meeting in a couple of weeks), are intimately and spiritually familiar with Loire Valley wine. If I had a favorite, I’d pick the Gamay “Les Petits Fers”, which is from four vineyards, fermented using a mixture of carbonic maceration, partial carbonic maceration, and traditional fermentation. Tasting this wine, I had one foot in Fleurie, and the other in some mystical Pacific Northwest landscape I have yet to experience. This wine is made of joy.

Two days ago, I stumbled upon a 2014 Chardonnay “Deux” in a local wine shop. The grapes for this bottling come from a vineyard called Strangeland, planted in 1978. It’s a white Burgundy style fermentation and élèvage with a few hours of skin contact, and long, slow, cool fermentation in barrel with minimal lees stirring. This wine is sleek, delicately lactic like fresh cream, with notes of pear and lemon curd, ripe and pleasurable. It does not taste like white Burgundy; it doesn’t have the dense earth and limestone backbone of white Burgundy, but it does have succulent balance, and is incredibly fun to drink. 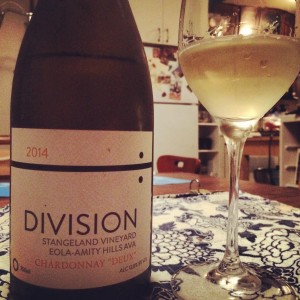 The other place whence I recently drew inspiration to keep going was Corsica. At the end of a recent trip to Champagne and the Loire Valley, I went to Corsica for the weekend, like a sweet little coda at the end of a layered and fascinating piece. This place is fantastically beautiful, and my terrible camera and photography skills can’t possibly do it justice. As the plane tilted sideways in preparation to land in Ajaccio, I stared out the window, eyes like saucers resting upon the blue water and rugged coastline below. The mainland of this island is arid and mountainous, covered in a particular kind of brushy garrigue called “maquis”. The coast is alternately rocky and sandy with many little gulfs and inlets. There are some physical similarities to the Maritime Alps and the Côte d’Azur, the Mediterranean coasts of France and Italy. I’d have liked to stay there forever. 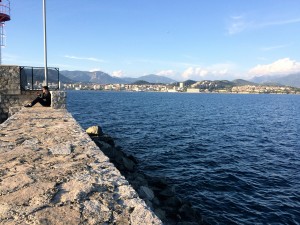 View from the bay of Ajaccio.

My vinous discovery of the weekend in Corsica was Sebastien Poly of Domaine U Stilicchionu. This is a 7 hectare, biodynimically farmed winery in the Ajaccio appellation. My friend Pierre from the Tissot era works full-time for Jean-Charles Abbatucci, a big name in the region (there’s a statue of one of Jean-Charles’ ancestors in the center of Ajaccio), but on the weekend for Sebastien Poly. Pierre essentially told me that he’d been surprised coming from Tissot (where most of the work is done in the vines, and little manipulation in the cellar) to find that at Abbatucci there’s tons of work in the cellar, racking, and other kinds of manipulations that contribute to the generally polished character of the wines. In search of something perhaps more like Tissot, he’d found Poly, and happily installed himself there on the weekends.

At dinner one evening in Corsica, Pierre opened a label-less bottle from a box of samples Poly had given him, and it turned out to be a cuvée called “Damianu” of Sciaccarellu made entirely without sulfur. This is a beautiful and expressive wine, amply garrigue-y on the nose, light to medium bodied with forrest floor and some slight and appealing funkiness. After an hour open, the wine becomes rose-y with flower-petal soft texture. I found a bottle at Chambers Street, and was happy to fall in love with it all over again once back in the states. 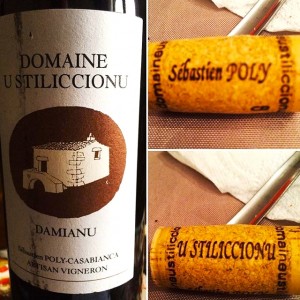 Once back in the states, I also tracked down the only white wine Sebastien Poly makes, which is Vermentino, and this (for me) is the real show-stopper. It’s full and lemon-y, suave, with a lingering finish, the rusticity of Italian white wine and the elegance of French … I don’t have a photo, but you can find the wine at Manhattan Wine Company, where the staff has created an extensive collection of Corsican gems.

To write or not to write is certainly a question, but to experience and become excited about new wines from new places is of the essence.