And another enjoyable wine experience of late was lunch with Olivier Jullien of Mas Jullien in Jonquières (Coteaux du Languedoc – or the newer and more terroir specific appellation – Terraces du Larzac). In a relationship with Rosenthal Wine Merchant of over two decades, Oliver had never visited New York. This was several weeks ago, now, but the wines and food were memorable and well worth documenting. The ever amusing, knowledgeable, tireless, and loquacious Neal Rosenthal was our host, and lunch took place at The Modern, which I mistakenly and embarrassingly thought was somewhere in the nether regions of Manhattan when in fact it’s … well … you know: uptown. The result of this rookie New Yorker gaff was that I was late, but Neal quickly allayed my embarrassment and my impatient foot-tapping on the uptown train was forgotten as soon as there was 2011 Mas Jullien Blanc in my glass. 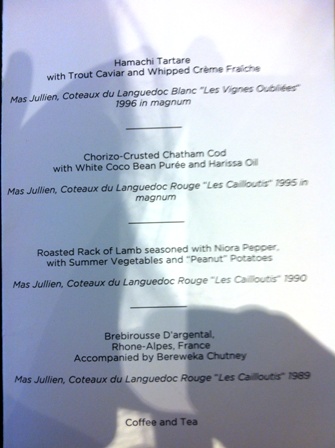 Mas Jullien is a superb Domaine in a part of France where there are only a few of such caliber. I’d say that while Olivier’s work is innovative (as I’ll discuss shortly), his wines are classical stylistically. These days we tend to forget about the Great Domaines of the Languedoc, where it seems that every year a new hipster producer who wanted to make carbonic Gamay but couldn’t afford land in the Beaujolais pops up, generally applying organic/natural vineyard and cellar practices to Grenache and Carignan with mixed results. (You’ll have to excuse my prose this time around; I’ve been reading David Foster Wallace short stories and I’m sure quite a few of us know how the tone of such a distinct writer can affect one’s voice when it comes to putting words on the page.) And so more staid and traditional producers who are doing great work fall by the wayside a bit, at least amongst my age group of drinkers. Of course many wine savvy people know that MJ is the real deal, that the wines are age-worthy, powerful, yet graceful expressions of the schist and limestone that mark this terroir. In truth, I’ve had the utmost respect – and have been drinking these wines – for years, and even I need to be reminded sometimes that they are sensational.

After much deliberation as to whether to intersperse what I learned about Mas Jullien over the course of the meal with notes on the wines we drank, which is perhaps the more organic way of documenting a wine lunch, I’ve decided to put revelations about the Domaine below, followed by tasting notes.

Olivier Jullien is profoundly innovative in the best possible sense. While he’s not concerned with wine fashion, he’s constantly changing what he does, constantly seeking, with the objective of making better wine. He looks for new terroirs in and around Jonquières and Saint Félix that are higher altitude in order to bring more acidity and better balance to his wines. For the white, he’s changing the blend to incorporate more Carignan Blanc grown on high elevation parcels. For the reds he used to rely heavily on Grenache and Syrah grown on schist soil. Now he’s moved to higher percentages of Mourvèdre and Carignan and he prefers limestone soil. Perhaps most intriguingly (and there was lots of discussion about this at lunch with no real answers though I don’t fault the Rosenthal crew for trying…), he used to make site specific wines such as “Cailloutis” and “Vignes Oubliées” and he now makes three general wines: Mas Jullien Blanc, Mas Jullien Rouge, and the more accessible red called “Les États D’Âme” (“the states of the soul”). It seems that now he’s creating a house style from various parcels, which are constantly in flux as he strives to craft the best wine possible. I approve. The skill and passion of the vigneron are clear in the wines and I can categorically state that never have I tasted so much excellent wine from the Langeudoc as I did as lunch at The Modern. 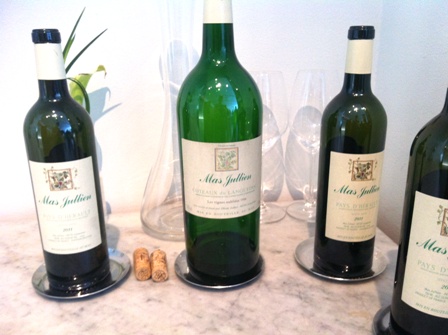 We began the afternoon with 2011 Mas Jullien Blanc. For those of you who are not familiar with MJ Blanc and who only know the red wines, it’s time to discover the white, which is unparalleled in its category in terms of both beauty and age-worthiness. The closest competitor is Mas de Daumas Gassac Blanc, which is also a stunner, and were the two to duke it out at a debutante ball, it’s unclear who would emerge the victor. For myself, I generally have a slight preference for Mas Jullien, which is often the drier of the two. The cepage is Grenache Blanc, Chenin Blanc, Carignan Blanc, Viognier, Clairette, and Roussanne. The wine is aged for two years before release and (I believe) it’s vinified in tank and aged in used barrel. Unlike the white wine of Daumus Gassac, it’s a blend rather than a co-harvest, co-ferment situation. The young white wine of Mas Jullien loudly pronounces its Chenin Blanc with a honeyed, herbal, and lemony quality that is almost creamy like lemon curd. The 2011 had the faintest hint of tropical fruit, which was balanced by acidity and clear structure to age. These are succulent, pleasing young wines that are manifestly intense and complex. If I owned a cellar full, they’d be hard not to touch prematurely (then again if the wine tastes great and brings joy, can we really say it was drunk prematurely?).

Fortunately at lunch there was the opportunity to taste MJ Blanc with some age. With the first course of Hamachi Tartare with Trout Caviar and Crème Fraîche we had 1996 “Les Vignes Oubliées” Blanc (out of magnum). Not identical in cepage to the recent vintages of MJ Blanc, this wine comprised two thirds Carignan Blanc and one third Chenin Blanc. Folks are sometimes taken aback when white wines from the Languedoc feature Chenin Blanc. Apparently, however, there has been Chenin in the Languedoc since the dawn of time – especially in the Aveyron – and it’s favored because it drives up acidity. The ’96 Vignes Oubliées showed, if anything, more Chenin Blanc character than the young wine with rich, golden color, straw and dried apply, waxy, nutty notes on the nose. It was remarkably fresh, almost herbal, stony, and really quite lovely with the Hamachi, though I found myself glad to have clung to a sip for my cheese at the end of the meal. As aforementioned, Olivier does not make the same wines as he made in the ‘90s. 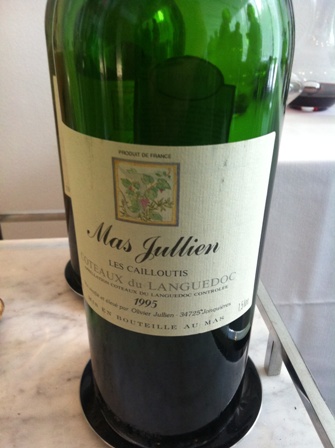 Next we turned our attention to a pairing that would ordinarily have been totally cringe-worthy: fish and red Languedoc wine. In this case the wine was 1995 Coteaux du Languedoc Rouge “Les Cailloutis” (out of magnum) and the dish was Chorizo-Crusted Cod with White Coco Bean Puree and Harissa Oil. The wine had matured in an olive-y way, which of course did wonders for the red, spice accents of harissa. From the end of the Grenache era at Mas Jullien, the wine was also a touch raisin-y with a velvety and resolved texture and weight that was almost Burgundian (what an overused word to denote a lithe and seamless wine, but it gets the point across). It was a deeply spicy, savory wine and, again, the vast majority of Langeudoc wines don’t taste like this…

We moved on to 1990 “Cailloutis” (out of magnum) with Rack of Lamb, Niora Peppers, Summer Vegetables, and Peanut Potatoes. My notes on the ’90 Cailloutis are less detailed as I didn’t like it as much as the ’95, which I found to be so expressive and perfectly chosen to complement the food. ’90 Cailloutis was more evolved, but also less gamy and compelling. The lamb, however, was the best lamb I have ever eaten and I pushed through burgeoning fullness to devour the whole piece. 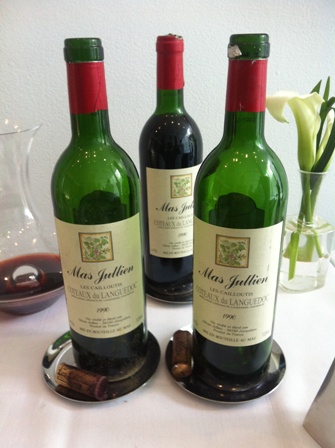 For “dessert” we had cheese: Brebirousse D’Argental, which Neal hilariously prefaced by a rant against cheese plates that feature miniscule wedges of a variety of carefully curated cheeses. Apparently Neal prefers a more focused selection. We drank 1989 “Cailloutis” (out of magnum), which offered a return to the savory qualities of the ’95, but with added bottle age, more tertiary aromas, and an elegant, stately presence that reminded me of a mature Barolo or Bordeaux. There was the faintest, rose petal-y note that took me to Piedmont, and also the dusty, spice-boxy warmth of an aging Bordeaux. We learned that ’90 was a warm vintage and that at the time there was no temperature control at the winery. The combination drove up the wine’s volatile acidity, which in turn gave the wine its deeply “animale” qualities. I didn’t smell or taste excessive VA; then again I drink lots of natural wine… As to its ability to pair with the cheese? I pretended I was in France, where bold red wine and cheese are often served at the end of a meal. It worked, but my last sip of ’96 Vignes Oubliées might have been better with the Brebirousse. What can I say? Try as I might, at the end of the day I’m still an American who prefers the symbiosis of rich white wine and cheese.

This was the kind of lunch I enjoy at most once a year. The food and wine were unsurpassed; I learned many things about Olivier Jullien for whom my admiration has only deepened, and I was delightfully sandwiched at the table between two archrivals in the wine trade. Thanks for the invitation, Neal!