One of my original mentors in the wine business is André Tamers of De Maison Selections. Salesmanship and scholarship find a fine balance in André, who educates about wines as skillfully as he selects them. I cut my teeth on André’s Spanish portfolio in the mid-2000s, then continued my romance with Spanish wine in New York selling Jose Pastor Selections (another fantastic portfolio) in 2016 and 2017. I claim no particular expertise in the realm of Spanish wine, but Spain is clearly producing some very interesting juice these days. If anything, being more amateur than expert liberates me to love freely and without prejudice.

My new employer Haw River Wine Man is André’s North Carolina distributor, and so I’m reconnecting with a book that has long been dear to my heart. Since I started with Haw River, André has hosted two master classes at his office, the first on Galicia and Rioja, the second on Sherry. Interspersed with my personal musings, you will find photos and captions of the wines that struck me over the course of these two seminars. 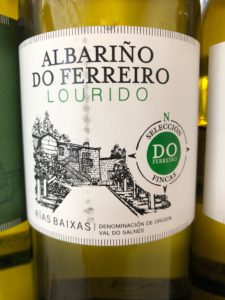 50-year-old-vine Albariño grown on decomposing granite from Gerardo Méndez of Do Ferreiro. The site is protected from fog, which allows for even more expression of minerality and crunchy, tangy fruit. Long lees aging fleshes out the texture. Swoon-worthy.

Back in 2015, an employer told me that my blog was like a little girl’s diary, best kept shut. The remark stung at the time. I took myself more seriously then. In 2015, I still held onto the hope that maybe I’d be a Great Wine Writer one day, a long-standing pseudo-ambition (like doing handstands and moving to France) that has slowly faded as I’ve come to grips with my limitations. I like selling wine, the industry, the people. I’m less scholarly and more pragmatic in 2019 than I was in 2015. I have less to prove, and other activities to tickle the aesthete within, like reading in French, playing the piano (I recently inherited a beautiful mid-90s Kawai grand piano, which has brought immense pleasure over the past few months). Over the years I’ve realized that, not only am I not going to be a Great Wine Writer, but my blog is like a little girl’s dairy. 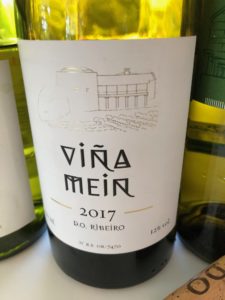 Ribeiro is in the far west of Galicia, almost to Riax Baixes, and also has granite soils. The predominant grape here is Treixadura, which reminds me of Melon de Bourgogne, growing fennel-y and herbal with a bit of age. The nose is all quince and wildflower honey.

I hearken back to 2015 because ever since that remark, I’ve been tempted to take down my blog, and the temptation is back with a vengeance. What do I really have to say? Selling locally and living in North Carolina, I feel like I’m not on the cutting edge of anything anymore, which is actually fine because lurking on the cutting edge via social media usually makes me angry, like a crotchety old lady who just wants to sip Champagne and Riesling while patting her cats and listening to NPR. Yes the wine lover within is quite happy where I am. The warehouse is full of bottles I’m curious about, wines that offer good value to the consumer. My customer list in New York boasted some of the most famous restaurants and wine directors in the country. My customer list in NC boasts the Mexican restaurant down the street, several righteous dive bars, and the general store in my home town. This makes me so happy. My boss believes in what he calls the “democratization” of wine, ways to de-snob the ultimate snob beverage, ways to make our product appealing to normal people. This is an attitude that resonates deeply with me, and others. He’s a popular figure in the community here and I understand why. 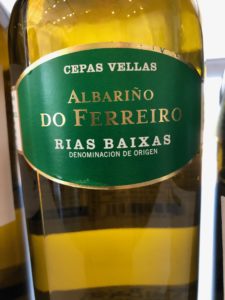 The site that gives Cepas Vellas was first documented in 1852. The combination of sandy soils and the long-lived nature of Albariño vines make this insanely complex wine possible. The vines here have been propagated using marcottage, bending the canes into the ground until they create a new vine. Chablis-like in its abundance of sea shell aromas and flavors.

Between May and August, I was too busy to write. I started a new job. There was so much work to do at my grandma’s. There were multiple moves, and life work stretching into the distance like an endless uphill race on a sweltering day (there were plenty of those, too). As of September, we have our own home, and I have time to write again. But the little girl’s diary remark haunts me. Why do I do this? What’s the point? I’m a fleck in the grand scheme of the wine business. Part of me feels like a failure because I didn’t stick it out and become a raging success in New York, because I allowed myself to fall in love with a man who wants to live in the country, because I prioritized personal life over career, because I needed to come back here and rescue my land. Intimate ramblings interspersed with commentary about bottles, vineyards, farming, seem self-indulgent. Why would anyone give a shit? I’ve been thinking again about saying farewell. 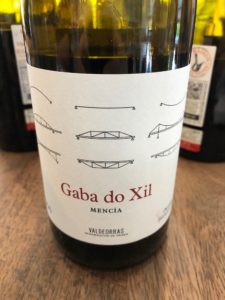 This is a co-plantation of Mencia, Merenzao, and more. The fruit is certified organic, fermented spontaneously, and raised in French foudres. It’s like a dark-fruited Pinot, or perhaps more like Trousseau … double heart emojis for the win!

These days I have the best excuse not to write, which is that in January I’m going to become a mother. People tell me I won’t have time when the baby is born, and my priorities will be all topsy turvy — undoubtedly true. I can’t imagine what it’ll be like. I already feel enormous pressure to be subsumed by the needs of my unborn fetus at the expense of myself. Don’t drink alcohol, or coffee, eat these particular foods, but not these other ones, go to the doctor … all the freaking time, do these exercises, but not these other ones, don’t lift anything heavy, gain weight, but not too much, the list goes on … It’s a pain in the ass, especially for someone who has lived as independently as I have. 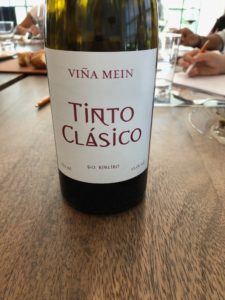 This wine is Caiño Longo, Brancellao, and Tintilla from a south facing site planted in the 1930s. It’s rustic and bloody like a wild Morgon.

The fact that I’m about to have to give lots of time and energy to a baby quadruples the insecurity about my relevance to the industry that I felt upon leaving New York. My brain can’t reconcile the robust and fulfilling professional life of my past with my future as a mother. But rather than continue to complain about being pregnant, which (trust me) I’ve done plenty of, I’ll say two things: 1) Drinking less or not at all is amazing and makes me happy every day. 2) Tasting wine while pregnant rules because my senses are heightened. Consequently I taste more intensely and better than ever, and am never hungover. These are the only two positive things I have to report about pregnancy. 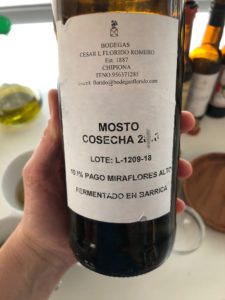 This is Sobretabla, unfortified Palomino at 11.5% alcohol. Ladies and gents: it tastes like Champagne base wine (vin clair)! Though the acid is less aggressive than in vin clair, the chalkiness of the soils in Jerez is clear as a bell. I hope this is exported to the US because it’s delicious and I think many people would be curious to try it.

Long story not-so-short, I’ve never been closer to discontinuing the blog as I tumble into an abyss of self doubt, but I keep hanging on. Why? Definitely not because I think I’ll one day be tapped by The New Yorker to write their much anticipated wine column. Maybe it’s because I don’t actually know how to take my prose off the internet. I’d have to back up all the work. It’s quite a few posts over the years! But I have a plan: a simple google drive folder should do the trick for the moment. 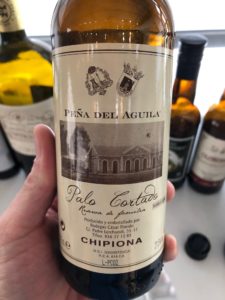 Palo Cortado is an illusive concept, somewhere between Amontillado and Oloroso. César Florido’s, from the seaside village of Chipiona, is quite old, having aged in solera for 40 years. A gorgeous example of the mingling of flor and oxidative notes. Deeply savory, saline, to my palate more Amontillado than Oloroso. From just two barrels, this was a rare treat.

Something else that keeps me from taking down the blog is that I continue to encounter people who’ve enjoyed my writing. Last week I saw the last chef I worked for (Ben Barker of Magnolia Grill in Durham) for the first time in a dozen years. He told me he’d kept up with my adventures via this blog. I was touched that he’d read. I felt part of the longer culinary and hospitality narrative of this area, even after 11+ years away. It made me want to continue the narrative, and write about it. I guess there’s a chance I’ll still be relevant after January of next year. Or maybe I won’t be relevant, but I won’t care because the marcottage will be complete, the genetic material propagated. 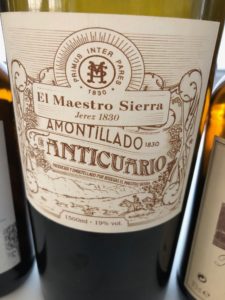 From the famed house of El Maestro Sierra in Jerez de la Frontera comes an Amontillado that is so old that no one really knows how old it is. We know it spent at least 50 years in Solera. The wine comes from two rare barrels, and was only bottled in magnum. 60 came to this country. As complex as anything I’ve tried, this wine offers caramelized orange and brown butter, yet is light on its feet with bright acidity and lingering nuttiness. Truly one of kind.

The honest-to-god reason I haven’t taken down the blog is that I love to write. I’ve always been a writer in the sense of keeping my little girl’s diary. Excavating my grandmother’s house over the past few months unearthed many a journal, not to mention letters, printed copies of emails, stories, papers, so many things I’d written over the years, documentation of a life lived wordily. My prose needs a home, and until I create that google drive folder, its home is here. As to whether my little girl’s diary should be kept shut? Well that’s a matter of opinion. I figure if the president can subject us hourly to his toilet tweets, then I can subject my few readers to a few paragraphs here and there.