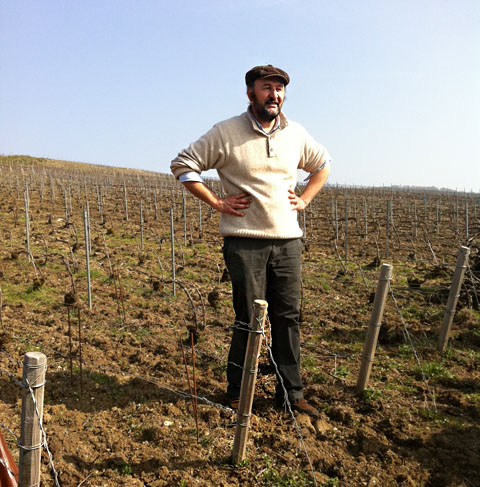 I don’t know why it’s taken me so long to collect my thoughts after my trip to Champagne. Perhaps it’s because I’ve been busy drinking Champagne. I came back from the region with an unquenchable thirst for this bubbly beverage. Perhaps it’s writers block, or the difficulty of deciding which of the growers I visited to begin with. I think the truth, though, is that while Champagne, the wine, is unparalleled (in my opinion), Champagne, the region, can be unappetizing to those of us who value organic viticulture and associate the Right Kind of wine with the lives of bucolic country farmers.

Champagne – like Bordeaux, I imagine – is inherently a little bit spoofilated, thus it’s all the more necessary and all the more difficult to seek out growers who farm well and make Real Wine. Not everyone thinks this is a crucial pursuit. Many of my peers who care about Real Wine would prefer to write off Champagne the way we generally write off Bordeaux. I can’t do that because I love to drink Champagne, which means that finding good growers in the region isn’t just a matter of my integrity as a wine buyer; it’s a matter of satisfying my own wine needs.

To begin with, the cards are stacked against Champagne “growers” (meaning RMs: farmers who make their own wine), because it’s more financially advantageous to sell grapes to a négoce than to make one’s own wine. This may be less true in the Aube than in the Marne. The Aube boasts at least a handful of wonderful independent Champagne growers who are, in a sense, liberated by the fact that there are no real recognized “Crus” in the southern part of Champagne. Historically, juice from the Aube was used to bolster Champagne from the famous villages in the north of the region; the prestige of Aube Champagne is a relatively recent phenomenon and, consequently, there’s a real spirit of innovation in the Aube. I found that, compared to the area around Epernay, the Côtes des Bars felt like the Wild West. The growers in the Aube whom I visited seemed more experimental. Take Emmanuel Lassaigne, who ages Vin Clair in Cognac barrels, Vin Jaune barrels, etc…  Even the innovators I met in the Marne felt somewhat blue-blooded and stayed. (Here’s a way to think about it: the Aube is to the Marne as the Jura is to Burgundy and, in fact, it’s about the same distance from Bar-sur-Seine to Epernay as from Arbois to Beaune.)

To be, not just a grower, but an organic (or biodynamic) grower in Champagne is a true labor of love. The climate is humid, which means mildew and odium, conditions that are hard to treat without chemicals. Peter Liem quotes Pascal Doquet in the Côte des Blancs as saying “Champagne is the hardest region to farm organically” and I’m sure many agree with Doquet. Several excellent growers I spoke to told me they have no real desire to become organic because, under organic viticulture, the treatment for mildew and rot is copper and they don’t want to use large quantities of copper in their vineyards. Fair enough. The tenets of organic viticulture were not created to accommodate the conditions in Champagne.

In the Marne, the land is ravaged from years of chemical abuse dating back to the 1960s when herbicides, fungicides, and systemic chemicals seemed like God’s gift to the farmers of Champagne. Now we see a generational divide between the very good growers of today, many of whom seek to minimize chemical use in the vineyards, and their parents who got started in the ‘60s. If the soil in Champagne is in some sense “dead” from years of abuse, there’s a solid movement to revitalize it regardless of the colossal effort required to do so.

Another issue faced by organic farmers in the Montagne de Reims and the Vallée de la Marne is what I’ll call the “morselization” of the vineyards, after the French word “morcelées,” meaning divided into many small pieces. What morselization means for organic growers is that their vines will always be subject to chemical runoff from adjacent vineyards that are not organic. This is an issue that affects the Marne more than the Aube, where larger plots of land are available and it’s easier to be isolated.

This description of the challenges faced by organic growers in Champagne brings me to my visit with Vincent Laval, whose father, Georges, was one of the first organic growers (if not the first; he’s neck in neck with André Beaufort in Ambonnay) in the region. Vincent’s Domaine in Cumières (outside Epernay and just a few kilometers from the famous Grand Cru villages of Ambonnay and Bouzy) has been organic since 1971 and is certified by Ecocert. While I met several growers who farm very well in Champagne, against all odds: Benoït Lahaye, Aurélian Laherte, Emmanuel Lassaigne, Sebastian Fleury, to name just a few, it was in Vincent Laval’s vineyards, cellar, and tasting room, that I began to fathom what an undeniable effect long-term organic farming can have on the wines, themselves. At Laval, there was the sense that everything Vincent and Georges before him were doing in the vines was reflected in the wines. The terroir of Cumières shone through in these wines as though it had been delicately shepherded into the bottle by two generations of Lavals.

Cumières is a very warm village in the southern Montagne de Reims, warmer than its neighbors: Ambonnay and Bouzy. Though I’ve never had an occasion to try one, Cumières is known for Coteaux Champenois Rouge. Because of this fortunate exposition and warmth, Vincent’s wines have a rich, vinous character, and effortlessly seem to achieve balance without dosage. Domaine Georges Laval is tiny; Vincent has two hectares in Cumières and another half hectare in the Marne, the grapes from which he sells. Georges Laval, in order to keep chemical runoff from his neighbor’s vines from affecting his vines, traded vineyards to attain a more contiguous parcel. According to Vincent, he did this knowing his production would be smaller because of the trades. Today, Domaine Georges Laval produces around 12,000 bottles a year and everything is done by hand, the labor divided between Vincent, his employee, and his apprentice.

We strolled in the vines for a spell, the late morning sun necessitating the removal of layers. Vincent showed us the vine training styles: Cordon for Pinot and Chablis for Chardonnay. We admired the porous and un-compacted soil as well as the grass and other foliage thriving between the vines. It was impossible not to smile in the face of so much sunshine and biodiversity. Vincent showed us a small clos behind the village that was recently purchased by Hervé Gestin, a great philosopher of biodynamics. We discussed the helicopter ban in Champagne, scheduled for 2014, as well as Champagne vigneron’s receptivity to sexual confusion as method of pest control. Vincent seemed to radiate kindness and generosity and I found myself thinking that he was easily one of the nicest vignerons I’d ever encountered. We were tasting with a group of elderly tourists from Brittany, clients of a store that sells Laval’s wine. Here was Laval (a man with a tiny Domaine, who makes basically no wine), opening his cellar as well as fabulous bottles, making lunch, and sharing his time with the group for the better part of a day.

Vincent makes site specific (rather than assemblage) wines. He has an adorable half sized basket press that allows him to press small quantities of fruit. Laval’s basic Cumières is half Chardonnay with the rest Pinot and Meunier. There are two magnificent single vineyard wines: “Les Hautes-Chèvres” (Pinot) and “Les Chênes” (Chardonnay). At the pressing, a small amount of sulfur is added to protect the juice from oxidation, afterward nothing unless absolutely necessary. These wines have very little sulfur for Champagne, usually around 20 milligrams per liter. The first fermentations are done with native yeast and the base wines are aged in old barrel. We tasted several Vins Clairs with Vincent, but, unfortunately I have not mastered the art of discerning what a good Vin Clair tastes like. They are rapier-like in their acidity and this intense nervosity makes them difficult for me to assess. One respects perhaps more than “likes” Vin Clair.  Laval’s 2011 base wines were sweeter toned, broader, and less rapier-like than some I’d tasted; one could sense that the finished product would be something special. (As I write, I begin to realize that maybe the essence of tasting Vin Clair *is* sensing that the finished wine will be special.) Further investigation of the cellar revealed no giropalate (a large, remotely controlled metal cage for machine riddling). Vincent does all his riddling by hand. He disgorged a label-less bottle of “Les Chênes” for us and we tried to guess the vintage: either 2006 or 2008, a vintage with good mineral cut and high acidity. The wine was powerful, shelly, dense, rocky, and had the kind of mouth-coating chalkiness that I find truly addictive.

At lunch (the first of two since we were also scheduled to have boudin at Raphaël Bereche’s house later), we drank Cumières Brut Nature based on the ’09 vintage. It was one of the most memorable bottles of the trip for me. Disgorged in February, the wine was leafy green, electric, vibrant, and had remarkable cut for 2009, a hot year that resulted in many diffuse wines. Next we tasted a rendition of the same wine that was made with five grams of dosage; it may have been the 2008 Cumières… we were told that in ’08, Laval decided to dose the wine. The aromas were more honeyed, but the palate felt less interesting, which seemed to prove to me that with warm terroir and great farming, Champagne can find balance at zero dosage. A bottle of 2005 “Chênes” arrived at our table along with paté, cheese, salad, and thick brown bread that was perfect for this rustic meal. Like the bottle Vincent had disgorged for us in the cellar, this “Chênes” was incredibly steely and, as the French say, “droit;” it left the impression of green grass and green fruits and rocks. 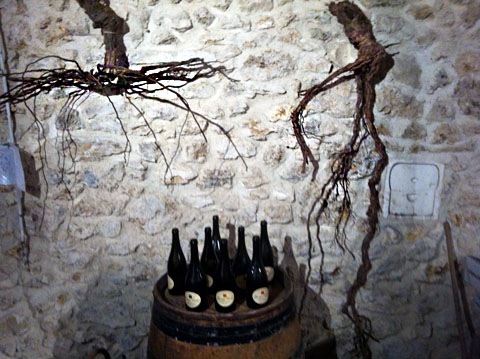 I looked up and behind Vincent, who was seated to my left. There were two dried up, gnarly brown grape vines hanging on the wall of the tasting room, a chilly, airy room that accommodated several large tables for lunch. The left hand vine’s roots plateaued out, sprawling from the trunk of the vine. The right hand vine’s roots extended straight down from the vine’s trunk, tickling the upturned barrel beneath. This is an image to see not to read about. It’s an illustration of the effects of organic farming. The vine on the left had been tended with herbicides and fertilizers. The roots never had to search for nutrients; they were lazy and sprawled under the surface of the soil. The left hand vine had been farmed organically. Its roots descended deep into the soil in search of nutrients, on the way soaking up chalk and imparting it to the grapes and the resultant wine. This imagine left a lasting impression, especially as I had the wine right there in my glass, in my hand, the result of all the years of hard work on the part of these Lavals, the incredible, Sisyphean task of farming organically in Champagne.