In the car on the way to a train station in rural New Jersey with my aunt and best friend, I commented that as a young person I used to look forward to the winter holidays, and that as an adult, I no longer do. This is not because I’ve become disillusioned regarding Santa, nor is it because large-scale family gatherings are stressful or unpleasant (for me, they’re delightful), nor is it due to some sort of holiday gift giving phobia. I no longer look forward to the winter holidays because I work in wine retail, where the month of December looms like a massive, month-long black cloud.

Late November kicks off the season of mayhem, when every red-blooded American, it seems, wishes to answer one vital question: “what wine should I have with my turkey?” Each year, I hope against hope that folks will have moved away from that odious grape: Sauvignon Blanc, which seems to imbue the wines made from it with the unmistakable odor of cat-pee and lemon-juice-stewed herbs. And each year I find myself fielding afresh requests for “a nice Sauvignon Blanc to pair with turkey.” Friends; hear ye! Sauvignon (both Cabernet and Blanc) is not the right wine for Thanksgiving! Suck up your prejudices and buy a Chardonnay or a Riesling or a Beaujolais or a Pinot Noir, for the love of God! (My best friend, who also works in wine retail, told me she will not allow her customers to buy Sauvignon Blanc for turkey.) And Thanksgiving is just the beginning, the front bracket to a season bracketed by New Years Eve at the other end.

Does this make me sound like a jerk? I’m not a jerk, but I’ve been doing this for eight years, and since I moved to New York six years ago, I have never been home for Thanksgiving or Christmas. Asking for time off to share these holidays I used to love on my home turf would be like a sailor asking for vacation in the midst of a raging storm. All hands on deck, crew! As bitter as I find myself sounding, I understand that this is my job, and I took the job knowing full well what the conditions are. In essence, I have no right to complain. Also, there are many gratifying aspects of wine retail, not the least of which is uniting a customer with a great bottle of wine for their meal, turkey or otherwise.

What I’m getting at here is that unfortunately I don’t think I’ll have time or energy for deep wine thoughts until 2014. However this has not and will not stop me from drinking fun wines. To that end, here are some delicious bottles I’ve drunk recently.

On AR’s recommendation, I picked up this Canary Islands wine from Gran Canaria. I have written about wine from the Canaries before. There’s great mystery as to how the wines attain balance given that the vines are essentially growing in Africa. However, they do… Apparently many of the vineyards are quite high altitude; Fronton de Oro’s are at 1,000 meters and terraced. And there are much needed winds that cool the landscape, as the mistral cools the vineyards of Provence and the Southern Rhône. Still, my problem with Canaries wines has always been that they don’t have quite enough acidity to make the flavors, which are often compelling and complex, really pop on the palate. I need to get over it. These are not northern French wines. 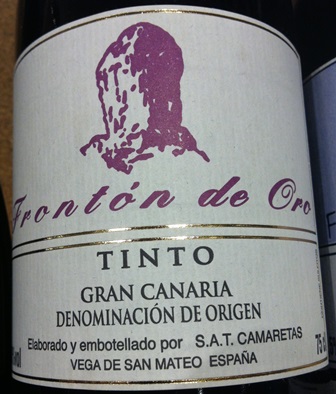 Fronton de Oro is in the Gran Canaria town of La Lechuza, known locally as “El Fronton.” It’s a family operation that – until 1999 – didn’t aspire beyond the production of some wine for the family to drink. (Now look how far they’ve come! Their simplest Listan Negro-based wine sipped at BYO Middle Eastern restaurants in Brooklyn…) A blend of Listan Negro and Tintilla, this wine spends three months in used barrels and weighs in at 13.5% alcohol. My initial impression was of telltale smoky minerality, mingling with slight disappointment that there wasn’t more acidity in the wine. The nose was all smoky cherries, raspberries, brushy herbs, and sumac, while the palate was lively in spite of the aforementioned acid issue… AR had previously mentioned that these wines remind her of Jura reds, both Poulsard and Trousseau. It’s an odd comparison, but I knew what she meant. She expressed it as a whiff of tomato floating across the nose and palate that brings Poulsard to mind. For me it was an herbal note, and a hint of raspberry seed on the midpalate that gives way to a porous and smoky finish. At any rate, it’s a lot of wine for $15.99, and it was sensational after two and even three days open.

There’s something refreshing about a determined quest to seek out value in wine, to put the price cap at $20 or maybe $25 per bottle. Most of the folks I know in the wine trade drink a lot of baller wine, and while it’s great to drink this way, for many of us it spoils the pleasure of a tasty bottle in a lower price range. In order to be a good wine retailer, you have to find what’s well-made and inexpensive, which is often harder than finding what’s spectacular and expensive. Furthermore, a stint drinking humble, everyday wines allows the fancy, special occasion bottles to remain fancy and special. (Anecdotally, it’s happened more times than I’d care to recall, that a customer with whom I have friendly rapport walked into the shop asking what sub $20 bottles I’d enjoyed recently and I had nothing to say. This is a sign that it’s time to reset, and what better time to do so than December).

Juan-Antonio Ponce came to pour at Chambers Street a few weeks ago, and I have never been as taken with his wines as I was by the two 2012 reds he showed: Clos Lojen and Buena Pinta. Juan-Antonio is an extremely dedicated and excellent winemaker specializing in the rustic and thick-skinned Bobal grape variety that is native to Manchuela in central Spain. (Who can forget their first look at Juan-Antonio, emerging shirtless from a vat of juice with the tag line “Check out my Bobals”?) I’m fairly sure I remember from our first in-the-flesh meeting that Juan-Antonio is friends with Maxime Magnon in the Languedoc and has been influenced by his style. In fact Ponce’s ultimate goal seems to be to make balanced wines, perhaps even vins de soif, from this grape. To that end he farms biodynamically and uses a technique of whole cluster fermentation called “remango” that incorporates both bunches and stems. The truth is that in warmer vintages, his wines are quite tannic, fairly hefty in alcohol, and just a little bit scary… at least to this humble blogger. 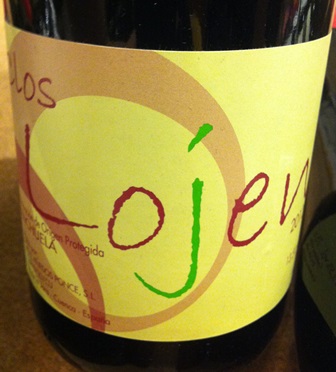 In 2012, however, Juan-Antonio made his best wines yet. I was stunned at his in-store tasting by how balanced and fresh Buena Pinta and Clos Lojen were. Clos Lojen – from the Domaine’s younger Bobal vines (age 35-50 years) aged for seven months in old barrels –  showed remarkable lightness and vivacity on the palate, while offering all the ripe, red and black fruit of a juicy Mediterranean wine. If you didn’t know about Bobal, you might think it’s Grenache, with its notes of plum, blueberry, and coffee cherry (the fruit that houses the coffee bean).  It was this marriage of ripe aromas and flavors to freshness and lift on the palate that kept me coming back for more.  Interestingly this is the same combination I was gently griping about in Occhipinti Siccagno in the last post. Clearly they are not the same wine by any means; Siccagno retails for $38.99, Clos Lojen for $12.99. Before I get myself in trouble, I’ll close by saying that it’s been a long time I derived so much pleasure from such an inexpensive wine. 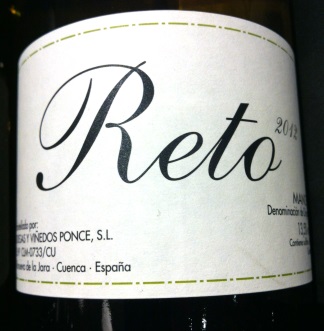 There’s also a sexy white wine made from Albilla called Reto, which has come into its own in 2012 if you’re interested in trying more from the master of Bobal. I haven’t taken it home recently enough to expound at great length, but the bottle I drank several months ago was memorable in a full-bodied, creamy, honeyed, Chenin-y way…

Returning to my comfort zone, Nicolas Gonin also came to pour at the store a few weeks ago. Gonin makes wine in a far-flung départment of France called Isère; his wines are labelled under the IGP “Balmes-Dauphinoises.” Where is this place and what do they grow there? Situated mid-way between Lyon and Grenoble, Isère boasts the cold winters of the Alps as well as the hot, dry summers of the Rhône. The vineyards are at 250-400 meters, considerably lower altitude than our friends at Fronton de Oro, with southern and south-eastern exposures. Soils are clay, limestone, sandstone, and silt… with galets! The grapes are the grapes you find in the Savoie: Altesse, Mondeuse, and Persan. While I liked the Altesse and Mondeuse, it’s the Persan that stole my heart. 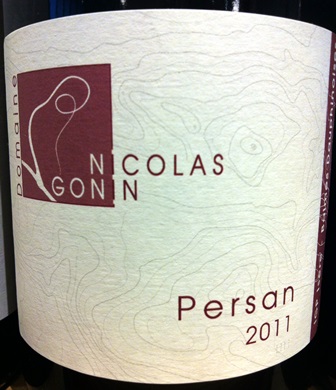 This wine was macerated on the skins for eight days before vinification in enamel tank. Gonin worked at both Ridge in California and Tempier in Bandol before returning home to revitalize vineyards in his native region. This bottle is, of course, more delicate than anything he would have made at Ridge or Tempier, with its ultra-tart, high-toned, crunchy red fruit and herbal aromatics. However, there’s some fairly serious tannin on the finish given the wine’s feather-weight frame. I’ve found the same thing in Mondeuses from Jean-Yves Péron in the Savoie, this tannic finish adorning an otherwise ethereal red wine… and I like it! Keeps me on my toes and makes me salivate. There’s a delightful floral note on the palate as well as the iron-y character of some Cru Beaujolais. Having tasted 2010 Person at Thanksgiving (though before turkey emerged from the oven), I’m happy to report that these juicy, crunchy red fruits, sanguine minerality, and floral notes become even more enticing with an additional year of bottle age. The most expensive of Gonin’s wines, it retails for $22.99.

There are two morals to this story: If you are thinking of starting a job in wine retail, don’t expect to see your family for the holidays unless they live close by. And, for every fancy bottle you crack, check in on a geeky, everyday bottle.