*For those of you looking for an in depth post on reduction from yours truly: someone has offered to exchange dollars for words on the subject, and so the piece is almost finished, but it will be published elsewhere.*

The first myth I’d like to dispel about Colorado is that the winter weather is bad. Certainly before coming here I was under the impression that because there are many places to ski, it’s frigid and snowy for a chunk of the year. It’s snowed three times since I arrived. The rest of the month, bright sunshine beams down on Colorado, melting any snow on the ground, and bathing the rockies in gorgeous light. While it’s not warm, there’s something about the dry air that makes the cold feel … less cold. Does that make sense? It didn’t to me either, but it’s true! 20 feels like 30; 30 feels like 40; 50 I can run outside in a tee-shirt and shorts. By pretty much any standard, the weather in Colorado is excellent. 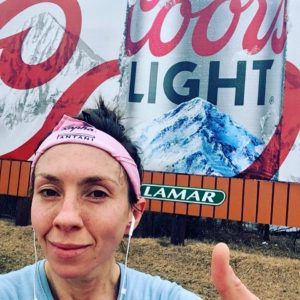 Jogging outside, in a tee-shirt, in January.

The second myth I’d like to dispel is that because pot is legal here, everyone’s a pot head. From my limited observation, once the thing is legal, it becomes normalized. People who use it are free to indulge in high quality, safe product. People who don’t like it, just don’t use it. Regardless of your feelings on marijuana, the dispensary is a fun place to visit for the sheer sake of seeing something commercialized that we used to have to wait three hours for the shady drug dealer outside that shitty hot dog stand in Durham to acquire (that was in the ’90s). Given how much money is pouring into Colorado because of legal weed, given how much exciting entrepreneurship is fostered here because of the pot business, I truly don’t understand why more states don’t follow suit.

New bridge crush … not the George Washington, but I’ll take it.

Many people asked me when I moved here if I was planning to enter the marijuana trade. I think they were joking, but now I’ve met several people in the weed industry, and it’s not such a stretch. There’s overlap, particularly in sales, but sales is virtually the same the world over whether you’re selling cars, bottles of Burgundy, or vape pens. I truly believe the pot industry should learn from the wine industry. Wine bathes in a sheen of luxury and quality; pot, by contrast, has a sort of fog of illegality and moral reprehensibility billowing around it (compounded, of course, by Jeff Sessions and other haters in the government). Of course these associations with pot are rapidly changing. But still, it’ll be nice when the type of high-end curation that accompanies fine wines, accompanies rare strains and formats of marijuana. At least I think it’ll be nice. Both drugs can be good or bad depending on who you are and how you use them. I don’t really see why one but not the other should have a nice cushy pedestal to legitimize it. That said, I’m still fascinated by wine, and only marginally interested in weed, which means I’ll never make the jump.

Not going to lie, after New York, the food and wine scene is a little challenging, but I think it’s because 1) I’m a hopeless snob, and 2) I’m in Fort Collins rather than Denver or Boulder. I’ve made day trips to both (they’re an hour away in different directions), and have found excellent food, superb wine retail, and basically all the yuppie amenities I enjoyed as a 9 year resident of north Brooklyn. Fort Collins, on the other hand, seems to have a restaurant for every five inhabitants, but most are fast causal chains like Qdoba (there are at minimum five in this town, I kid you n0t), Noodles & Company (there are two on the main drag within half a mile of one another), and my personal favorite “Stuft”, which serves burgers and beer. “Stuft” has become a bit of a whipping boy for me because of the creator’s clear inability to spell in the English language. The stark reality is that I cannot find a good loaf of bread in this town, but hell, no one eats bread anymore, right? More importantly, there is good 3rd wave coffee here!

It looks and sounds as though the yuppification of Fort Collins is in full effect. People are priced out of Denver and Boulder, and are moving to their environs in droves. This means it’s only a matter of time. To that end, I’ve been fantasizing hot and heavily about opening a tiny wine bar here, perhaps with a small retail selection as well, something I’d never have contemplated in a million years in NYC, but Fort Collins needs it. The grad students and hip professors need somewhere to go besides the tap room and the whisky bar. They need somewhere to go where the college students are not. Applying things I learned in the metropolis, I think I could create — for not a ton of money — a cool space that would offer something not on the menu here yet (tiny production wine, natural wine, bar á vins flavor, a sense of exclusivity, something other than the ubiquitous suburban American, slightly-too-large, faux-fancy-but-you-can-still-wear-your-exercise-pants-there, soulless venues that crop up like weeds in towns like Fort Collins, and my home town for that matter, as they gentrify).

On to wine. When I repped in New York, there was always open wine in my life. Usually I’d drop bottles with customers. Sometimes I’d use them to barter with local cheesemongers (I got a lot of free cheese that way especially living in Brooklyn). When they were really good (Enviñate, Nanclares, Michel Autran, Ruppert-Leroy, Saint-Pierre, Silvio Carta, Falkenstein, all the MFW Oregon wines), I’d take then home and drink them. I rarely cracked bottles from my personal collection because there was no need. In Fort Collins, I’m not (yet) opening wine for my job, the wine retail scene here is … coming along, and I haven’t (yet) bought a car in which to go shopping in Denver/Bounder, with the result that if I want to sip something in the evening, it has to come from my “cellar.”

At first I thought “Sweet! I’ll finally start depleting my stash.” Shortly thereafter I thought “Fuck. I’ll never be able to buy good wine again.” And I resolved to, one by one, give back in some small way to the retailers who supported me as a rep in New York by ordering from them and having wine sent here. But the primary repercussion has been that I’ve checked in on some fabulous wines from my “cellar” that I probably would not have opened otherwise. 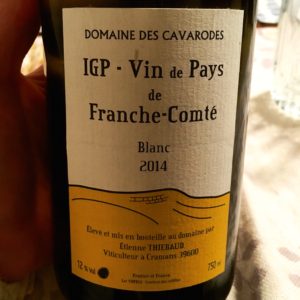 It was a joy to reconnect with the work of Étienne Thiébaud (Domaines des Cavarodes). I’ve been following his wines for seven years, and hard as they are to acquire, they always deliver. This is a wine I tasted out of barrel in the winter of 2015. At that time it was gloriously high acid, hard, and vivid. According to my notes, it’s a blend of 10-ish ancient varieties (comprising 80% Chardonnay with Savagnin, Savagnin Rose, Sauvignonasse, and more), vinified with only a drop of sulfur. This bottle had seen six months under my bed in Brooklyn with no temperature control, followed by a journey across the country through frigid temperatures. It was expressive and fresh as a daisy. I reached for this bottle because I get terribly nostalgic for the Jura, and Étienne’s wines (more than many others) taste of the region. They are not sous voile, but have that lovely whiff of oxidation that softens the green apple and lemon and stones. Perhaps more importantly, you smell — not just the marly limestone — but also the cellar and the Comté rind. Like most of my favorite textured, high-acid whites, this wine grips the inside of your mouth as though coating it with a fine film of stone. 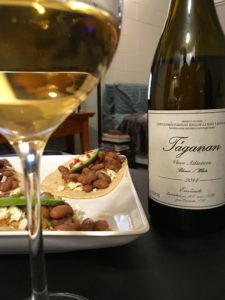 It was also a joy to find that 2014 Táganan Blanco from Enviñate has arrived at a beautiful spot in its life. This wine, along with a bottle of Nanclares 2016 self-titled Albariño (not pictured) got me thinking about the color of minerality. Táganan is volcanic; Nanclares is granitic, but both have dark-toned minerality. As crystalline, pure, and pale as I find the rocky core of wines from places like the Côte des Blancs, Chablis, even Jura where you get more yellow sensations, these two have a brooding essence that puts me in mind of dark earth and stones. Táganan is intense and wild, and I wouldn’t have it any other way. 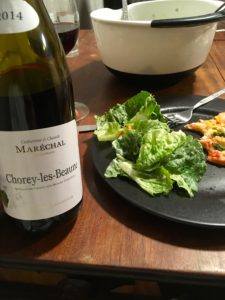 John McIlwain gave me this 2014 Chorey-lès-Beaune from Catherine and Claude Maréchal. I’d been meaning to crack it for months, but the moment didn’t present itself … until moving day. At the end of moving day, I was so tired and so hungry that the only thing to be done was order a pizza. Recalling my friend Raj Vaidya extolling the virtues of Burgundy and pizza, I gave this counter-intuitive pairing a try. I love 2014 Burgundy more and more with every bottle. It speaks to the acid lover in me, and I appreciate its rusticity. Chorey is a rustic appellation, and this is not a wine to coddle you with cloying fruit. Its blackberry brambly with a hint of dusty graphite and fruit seed on the palate. It’s a wine that could only have come from an off-the-grid Burgundy village like Chorey. I have neither the money nor the drive to drink the fancier stuff, and so humble Burgundies like this are perfect for me. 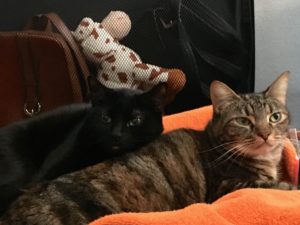 In other news, I miss my friends in New York. Relocation to an entirely new place is a lonely business. But as my best friend Susannah pointed out, I “don’t like going out anyway …” The cats are good company and they are happy here. There’s plenty of cooking to be done, and we’ve already take down three seasons of True Blood (highly recommended), four seasons of Peaky Blinders (ditto), and three novels. And I’m relearning Chopin’s Nocturne in B flat minor, Opus 9, N0. 1. I’m getting up and running with Division, and my hope is that by the time our spring Divide and Conquer tour begins, I’ll be rested enough to party my face off when I get to the east coast.