For the benefit of a journalist writing an article for GQ magazine on something called “emerging wine regions,” we did a comprehensive tasting of the Tissot lineup. Everything about this (save the wines, which were great) made my skin crawl. With some exceptions, I’m not much of a fan of wine journalism; I find it so often puts relatively rare wines on the radar of exactly the wrong people for the sake of what? A story, I suppose. Perhaps I’m a hypocrite, having been a fairly vocal force behind Jura sales in New York for some years now, but retail is not journalism. Retail talks the customer through the profile of the wine, prepares them for the experience they’ll have. Retail assesses the consumer and tries to discover their story as a wine drinker, what’s on their dinner menu. Wine journalism obsesses over what fruit flavors can be found in the wine, tells a souped-up version of the story and says: “this is the next cool thing!” I worry for the Jura, mauled by the dirty hands of GQ magazine. However, Stephane is my host, and if he says “come make small talk, be pleasant, and taste wine with a New York journalist,” I say “okay!” (Apologies to a handful of very good friends who are wine journalists – I have a bit of a bad taste in my mouth at the moment, but I’ll get over it. Thanks for tolerating my rant, and please don’t hate me.)

We began with a brief tour of the vines, and a discussion of the history of the region. (For more information, I suggest perusing Wink Lorch’s book on the Jura, and while doing so, consider that she is one a handful of true, independent wine writers, and is a national treasure rather than a hack.) I’ll make a brief summation of Stephane’s points: the Jura has very old soil, of which Triassic clay is the oldest. Like Burgundy, the Jura also has an abundance of Jurassic limestone. Unlike Burgundy, which is pretty much one continuous slope, Jura is a mosaic of hills and soils that were created when the Alps pressed against the Jura Mountains, pushing ancient soils close to the surface of the earth. (I strongly dislike comparing the Jura to Burgundy, but in this case it helps to make a point about the distinct development of the terroir here.)

The two major soil types in the Jura are clay and limestone, with lots of marl in various colors. Limestone works especially well for Chardonnay, Pinot, and Trousseau, while Chardonnay, Savagnin, and Poulsard do particularly well on clay. Why? I gather Chardonnay can grow anywhere, that clay promotes higher potential alcohol and higher acidity, which are helpful when making wines through processes that are more oxidative than reductive (Savagnin), and that (at least according to Stephane) Poulsard on limestone would be a catastrophe. I’ll have to be sure to ask a couple of other Jurassian vignerons about this for verification.

As to the history of the grapes planted here, Pinot Noir arrived in the 15th century; Chardonnay arrived in the 14th century. It’s unclear what’s up with Savagnin but it’s been in the Jura forever, and is widely considered to be part of the Traminer family, perhaps even the parent of all Traminers. Happily for us, someone brought Trousseau (also known as Bastardo) to the Jura from Iberia, and Poulsard? Well … Poulsard has been haunting the vineyards, barrels, bottles, and palates of the Jura since the dawn of time … 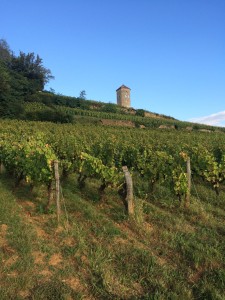 We went to a vineyard called “Curvees sous Curon,” situated between the Curvees and the Curon vineyards en route from Arbois to Montigny. Corvees is a limestone-heavy site with western exposition that gives us beautiful examples of Trousseau including those from Alice and Charles of Octavin, and Pascal and Evelyne of Tournelle. Curon faces full south, and I’ve most often found rich Chardonnays coming from Curon. Facing south and southwest, Curvees sous Curon has both Trosseau and Chardonnay, and looks up at the lovely Tour de Curon. Around this little rhomboidal tower with its commanding view of Arbois, is a tiny, pure limestone clos planted to very nice vines of Chardonnay. From this clos comes Stephane’s top single vineyard Chardonnay: Clos de la Tour de Curon. If Arbois someday succeeds in formally establishing “crus,” this will be its Montrachet (or whatever). I vividly remember visiting this place over three years ago with my good friend Zev, jostling around in the back of Steph’s SUV, listening to his incredibly fast-paced patois of English and French.

Because it abuts the chamber where four huge barrels of DD were furiously fermenting, connected by tubes exchanging run-off juice and carbon dioxide, Steph’s normal tasting room exuded strong smells of reduction and yeast. So, we tasted outside at a picnic table in the sun.

We began with Cremants, which I will skim quickly. For the most part the grapes for Cremant come from a vineyard called “Les Tourillons,” the highest Steph farms at 440 ish meters about sea level (high elevation –> high acidity –> superior sparkling wine). Steph’s Cremants generally contain 50% Chardonnay with the rest a blend of red grapes in percentages that vary from year to year. The 2014 Cremant, for example, will contain quite a bit of Trousseau, because not all the Trousseau we harvested was up to snuff for his Trousseau “Singulier.” In my opinion Stephane makes some of the best sparkling wines in the Jura, and I’m a particular fan of the “Indigene” wines (pink and white), which are made using all indigenous yeast, the second fermentation started by vin de paille. For fans of more Champagne-like Cremant, there’s BBF (Blanc de Blancs en Fut), a barrel-matured, long lees aged Cremant that is toasty, apply, mushroom-y, oxidative, and Brut Nature. I love BBF, but it’s not for everyone, and the last batch we sold at Chambers Street was perhaps more oxidative in character than we’d have liked.

Of particular interest at this tasting was a Cremant Stephane calls “Nature,” which has not been seen before in the US, but will (I think) arrive shortly. Under capsule rather than cork, this is Cremant, undisgorged. Now here’s something new! Apparently when the second fermentation takes place with native yeast rather than cultured yeast, the lees are cleaner, less bitter, and can be drunk as part of the wine rather than popped out as a frozen nugget of “depot” at the time of disgorgement. (Pascal Agrapart had recently been to visit Stephane, and they’d had a lengthy conversation about the quality of the lees in sparkling wine fermented with native yeast. No surprises here. These are two of the most masterful winemakers I’m aware of when it comes to making “pur jus” Champagne method wines.) Sure enough, there were lees suspended in the wine, making it slightly cloudy and textured, but with fine character and minerality. With 7 grams of sugar, the wine was nicely balanced and delicious, with faint notes of reduction that dissipated within about five minutes. Our GQ journalist friend flipped for this wine. It’s likely he was getting a bit drunk as he hadn’t been spitting, and his enthusiasm was really quite touching: “Am I crazy or is this really good? I mean … I love this. It’s really good, right? I’d drink this every day. I’m going to order a case, etc … etc … “

A few months ago, longer, even, I listened to my good friend Raj’s interview on the notable and entertaining podcast: “I’ll Drink to That.” Raj had recently been to the Jura for the first time, and he’d tasted with Stephane. Raj absolutely raved about the incredible terroir expression found in Steph’s single vineyard Chardonnays. Though I’d tasted through these wines on a number of occasions, both at the winery and in New York, with Raj’s enthusiasm in mind, I applied my mind and palate afresh. 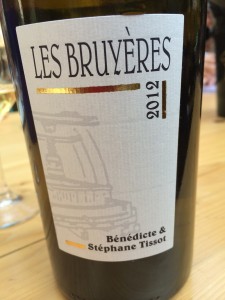 Les Bruyeres features clay soil from the Triassic era. The nose was mossy, leafy, and spicy, with a prominent note of black pepper. Aromatically the wine was open and gorgeous, but the palate was somewhat closed down, though intensely structured and high acid. All of Steph’s single vineyard Chardonnays see essentially the same elevage: a quarter new, fine-grained wood, a mixture of oxygen and lees aging, and sulfur only at bottling. It’s a style of winemaking that – to my palate –truly brings the character of the vineyard to the forefront. 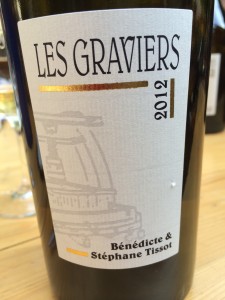 Les Graviers is a limestone vineyard, and sure enough the wine was markedly different than Les Bruyeres, with notes of citrus and lemon curd on the nose. Less exuberant aromatically, yet more open and with ever-so-slightly lower acidity on the palate, the wine was drinking beautifully, and finished with a mouth-coating smack of limestone (I’m a total sucker for that).

Sursis (meaning “reprieve”) comes from Chardonnay planted in Chateau Chalon. Apparently the original intention upon purchasing land in this famed cru of the Jura was to uproot and replant the plot to Savagnin. However Stephane and Benedicte chose to give these 35-year-old vines “a reprieve,” and they now have a wine that shows the character of Chardonnay on the Liassic-era clay of Chateau Chalon. We had recently opened a 2011 rendition of this wine at our gite, and it was an odd, funky bottle. The 2012 Sursis was clean, citrusy, and spicy with white grapefruit on the nose and glorious, soaring acidity on the palate.

2009 Clos de la Tour de Curon was an impressive bottle of wine, powerful, rich, mouth-coating, with the lemon curd notes of Graviers, but with more intensity, and an even longer finish. To my palate, this was the wine that most resembled a sensational white Burgundy, but I didn’t like to say so, because Stephane had already rebelled (and rightly so) against attempts to pit his wines against Burgundies. (To be honest, I think he was provoked by our journalist friend, who seemingly couldn’t resist doing so in spite of Stephane’s most sincere attempts to illustrate why and how the Jura is not like Burgundy.)

The next wine arrived at the table with no label, which presented a beautiful opportunity to taste blind. “What do you think, girls? Argile or calcaire?” Stephane turned to us expectantly. I nosed the wine. It was leafy and mossy, spicy and mellow, deeper in the glass and more resolved on the palate than the wines we’d been tasting, and clearly more mature. Looking back half a page in my notes, I found these descriptors to fit more closely with the profile of clay than the profile of limestone. “Argile!” Bingo. It was a 2006 Chardonnay from the degraded clay soils of the La Mailloche vineyard. 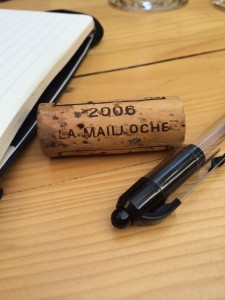 By this point, our journalist friend was almost certainly drunk. “These are just great Chardonnays!” To our consternation, he’d become absolutely obsessed with comparing Stephane’s wines to white Burgundies. He wanted to know if the wines would age “like” white Burgundies. By this, I wasn’t sure if he meant “as well as” or “in the same way as.” Stephane left the table, and I gave our journalist my impressions of the way white wines from the Jura age, telling him that their savory character comes to the forefront, that their incredible, bracing acidity remains, that they often develop an aroma I’m hard pressed to describe as anything other than “chicken stock.” Stephane returned with a dusty bottle in his hand. “Don’t talk about it; just enjoy it.” The wine offered notes of mocha and clove; it was cheesy and a bit lactic in character. Underneath these notes of soft spice, there was the telltale aroma of celery seed and a caldron of stock burbling on the stove. Mossy and broad on the palate, with a hint of preserved lemon and absolutely riveting acidity, it was a 1975 Chardonnay from Les Bruyeres and Les Graviers. It was a beautiful bottle, and for about a minute, it even silenced our dear journalist.