Adventures in the Loire Valley.

The second half of my recent trip to France was spent in the Loire Valley. I’d never travelled from Champagne to the Loire before. It was an interesting peregrination, full of contrast. Champagne is my spiritual home, but I’m fond of the Loire Valley as well. The people are laid back and kind, the vigneron culture is open-minded and open-hearted. The landscapes are subtly beautiful, the green woodsy, continental hills of Touraine, the misty plain of Saumur with its stark castle rising up from the river, the feeling — driving east to west — of nearing the Atlantic ocean, the city of Angers, so civilized, the bustling streets in the city center and the immense stone facade of the ancient castle. Yes it’s a nice place, the Loire Valley.

I imagine most of my peers prefer the Loire Valley to Champagne, and for valid reasons: it’s objectively prettier, with more organic farming, more biodiversity, more opportunity for outsiders and/or young people to move in and get started because the land is not excessively expensive; the vignerons are not business people the way most Champenois are; even the best wines are a hell of a lot cheaper than most Champagne. The vibe is different. There are fewer swank tasting rooms, and more dégustations at the kitchen counter with the kids running around, or in caves cut out of the rock with fuzzy molds carpeting the walls. There are fewer fancy clothes, more messed up teeth, a lazy eye here and there, more vignerons reaching like clockwork for a tobacco pouch. This is a less wealthy, and a more humble place than Champagne. Yes there are so many reasons to love the Loire Valley, before one has even nosed a glass of luscious Chenin Blanc.

Each time I visit the Loire I tell myself I’m going to plan better so as not to have to spend 2-4 hours a day in the car. The truth is that the Loire Valley, while relatively small in actual hectares planted to vine, is 170 miles long start to finish, which makes for a lot of driving. The vineyards follow the rivers, not just the Loire, itself, but the Indre, the Loir, the Cher, the smaller rivières that spider out from the major fleuve. Thinking I wouldn’t repeat my mistakes of the last 5 day stint in the Loire in 2014, I sat down with the map, a list of producers I’d be visiting, and tried to formulate a game plan that would save time, gas, and tolls.

Having decided to stay 3 days in Tours, and 2 days in Angers, I was relatively confident I could see 3 vignerons a day if need be. I was thwarted on the first day, when I misguidedly scheduled the morning in Montlouis, the early afternoon in Saumur Puy Notre Dame, and the evening in Vouvray (the reason I was kicking myself is that Vouvray and Montlouis are right next to each other; Saumur is 2 hours away, to drive from Montlouis to Saumur, and back to Vouvray is lunacy). And then, I allowed Hervé Grenier of Vallée Moray to talk me into staying for lunch. What was I thinking?!? I was late to my afternoon appointment, missed my later afternoon appointment, and spent 5 hours in the car that day. Getting off to a great start! 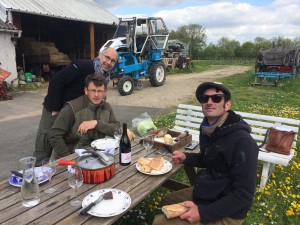 Lunch with Jean-Daniel, Hervé, Vincent, and their tractor. 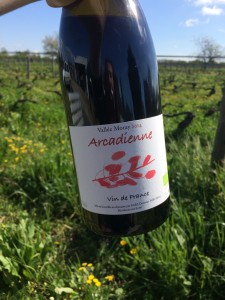 Gamay in the fore and background.

On the other hand, I had a delicious outdoor lunch with the team from Vallée Moray, with 30 ares of Gamay behind me, a hectare of old vine Pinot planted on tuffeau off to my right, and a tractor in my peripheral vision. We drank a crystalline Gamay from the vineyard behind, crunchy, expressive, redolent of tiny berries.

The second day got off to a more auspicious start. I was on time to my meeting in Bourgeuil, in spite of a wasted 15 minutes in the morning trying to get the gas pump to take one of my credit cards, and Stéphane Guion took me through a vertical of delicious wines from Bourgeuil, culminating in a 1990, which we tasted in the cellar, spitting on the gravel floor, speaking about our friends in New York, David and Eben Lillie, the success of Racines NYC, Eben’s upcoming wine bar project. Thanks to David Lillie, I’ve been drinking these wines for years, and they deliver much pleasure and complexity. My heart goes out to Stéphane, whose crop suffered terribly the next morning due to a frost that swept the Loire Valley, hitting Chinon and Bourgeuil particularly hard.

A dozen Bourgeuils before lunch.

That evening I went to Michel Autran’s home in Noizay (Vouvray appellation). This is a spiritual place, seemingly alive with everything that grows in the verdant Loire Valley, lilacs, wisteria draped over a pergola outside the door. We wandered around the garden for a few minutes looking at plants, the dusk heavy and sweet. In his previous life, Michel was a doctor. When I asked him why he changed professions after 20 years in medicine, he told me that being so close to death was very hard for him; it wore him down, and he decided to make a change. 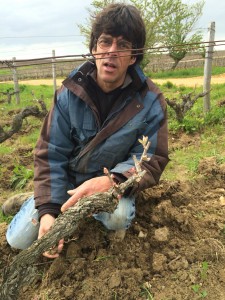 Discussing the movement of the sap.

Michel has 3.5 hectares of Chenin Blanc, which he began farming around 2010 after working for many top producers of Chenin including Saumon, Jousset, and François Pinon. Intensely thoughtful regarding every aspect of the operation from farming to bottling, he sings to his barrels; he makes at least 3 passes in the vines to ensure the grapes are ripe; he tastes constantly to follow the progress of his wines. He leaves the wines for nine months in cuve between barrel and bottling to erase any traces of woodiness from the handful of new barrels mixed in with the slightly older ones. In the cellar with Michel and a stagiaire from Jousset, we tasted almost every barrel of 2015, most just finishing their alcoholic fermentations, in succulent limbo between sweet and deeply rich and mineral. 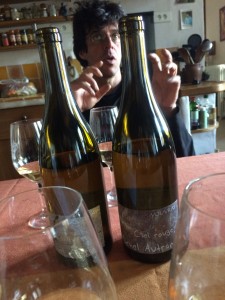 You can’t see him, but there was a friendly black cat warming my lap during our tasting.

At the table in Michel’s kitchen, we migrated back and forth from 2013 to 2014 Les Enfers and Ciel Rouge, making observations about the wines, changing the subject, and back again. I came away with the impression of Les Enfers as a feminine wine, and Ciel Rouge as a masculine wine. Michel didn’t agree, but nodded as though he grasped why I might say such a thing. Enfers is silex; Ciel is clay. And yet each sip was different, and even as I formulated opinions of these wines, I changed them again. In general, Michel’s wines have incredible precision and clarity; they are wines that have a shape, beginning fine and subtle, with aromas of honeysuckle, middle broad, singing with tart apple and tangerine, and then tapering again to a finish of mouth-watering acidity and deliciously bitter agrumes. I’m not someone who can conjure up a nice fruit salad in describing wine, and I’ve never liked that style of pontificating anyway, finding myself — by the year — increasingly French in my lexicon. Fine, précis, mais rond au même temps, avec une belle fraîcheur en bouche, on gout le bois, mais pas trop. The French words come as easily as the English ones, and sometimes more easily.

I had the third day all figured out. After my morning tasting with Simon Tardieux in Thésée, I was going to drive to Saumur, run two quick laps around the island, change back into my pants in the car, and arrive on time to Bertin-Delatte at 4pm. I had only two visits that day, and Geneviève had told me not to come before 4 because the kids would be asleep. Wondering whether I’d get funny looks if I changed into my jogging shorts at a rest stop, I pulled up Simon’s email, surmising that I was close, but had gotten the house number wrong. “We’ll take a tour of the vines, and then we’ll taste the wines with lunch.” There it was, the dreaded word lunch. My heart sank. There would be no run; I’d likely be late to Bertin-Delatte, and my body and brain would be sluggish with food and wine for the rest of the day. But there was nothing to be done. While I could theoretically turn down a last minute lunch invitation under some creative pretext, an email invitation weeks previously was not to be trifled with.

Simon and I had a lovely long walk in the vines. He brought along his soil sampler and we took soil cross sections from all his vineyards, mixtures of clay, silex, limestone, and sand in varying ratios. He told me about the new plantations of Pineau D’Aunis, which made my heart sing. Our market is suffering a lack of D’Aunis these days, and, having worked with Catherine and Didier at Clos Roche Blanche, I felt confident Simon Tardieux could make a good one. We tasted the new wines outside the winery, and then packed up the bottles to bring with us to lunch at Simon’s house. 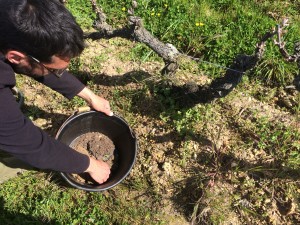 You probably know where this is going. Lunch with Simon and his girlfriend (Julienne?) turned out to be one of my fondest memories of the trip. We ate white asparagus from a local field in a sauce of creme fraîche with spring onions and lemon, followed by a tightly packed ball of game bird meat wrapped around the outside with fat, rice with lardons, and butter beans. 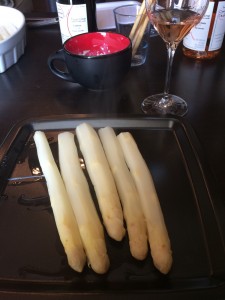 Then, of course: cheese. And finally, several stiff black coffees (and for Simon and Julienne, a chain of rollies). We talked about many things at lunch, tapping into something the French seem to value almost as much as the extended meal itself, namely the chance to speak animatedly and extensively about a variety of subjects. Topics ranged from Julienne’s desire to visit Hoboken, to my notion that the French have a stronger sense of patrimony than Americans, to Simon’s inability to talk to his neighbors about organic farming. It was almost impossible to pull myself away, and had Simon not had to go back to work, I might still be there now, listening to tales of their early days in social work before Simon became a vigneron and Julienne a local government administrator.

I arrived in Muscadet territory the next afternoon, at the end of my rope steering and shifting gears while searching google maps for addresses the gps wouldn’t find, mentally exhausted from speaking French day in and out, and ready to take a break from winery interiors. Yet when I met the kind, languid, and lanky Stéphane Orieux of Domaine Bregeonette, my brain revived. 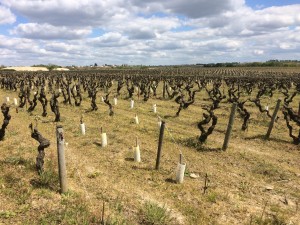 Muscadet is not like the rest of the Loire. It feels much more coastal, warmer; the earth drier and sandier, the grass brushier; the houses are different, pale facades with brick red tiled roofs rather than ancient, gray rock. The sun was shining, thick, cotton-y clouds filling the sky as Stéphane and I walked around in his old vine, granite-soiled vineyard the Clos de Coudray. We talked about the new Crus of Muscadet, about how in a few years he’ll be able to make a Cru “Vallet” (the cluster of towns that make up his micro-terroir), but he must use vines planted on mica-schist as stipulated by the new AOC. While this movement is essential for elevating the region, there are some drawbacks: the long lees aging, the heavy bottles, and ugly modern labels so many classic producers are now adopting for their cuvées Extra Big Deal. These are interesting questions: how to elevate Muscadet, how to make Muscadet “serious” wine, how to make slightly more money for the farmers of Muscadet in order to keep the next generation invested in making wine here. 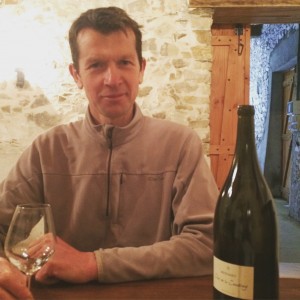 Stéphane with a magnum of 2012 Clos de Coudray.

As beat as I was that afternoon, Stéphane’s seamless and invigorating wines, his pragmatic approach, his calm demeanor, made our hours together fly by.