A Visit to the Northeast Kingdom.

If years 1-3 in the wine trade were years of tasting everything and learning the rules; 3-8 were years of increasingly specific delving into subjects dear to my heart; 9 was a rogue year, and 10 a year of exploration. As gratifying as it is to feel a certain mastery of a region or set of wines, to cull images of those places from memory, the timbre of a winemaker’s voice, the distinct tang of his or her style melding with the terroir, a proud face as the pipette is drawn from the cask, it’s also enlivening to discover new things, and there are psychological benefits to open-mindedness. Recently it’s felt like each day I let go of a smidgen of preconception to embrace something new. One of those new things has been cider.

At MFW Wine Co., the cider portfolio has grown robust and interesting thanks to the efforts of my colleague Jeff Russell. It’s a category of drink I know essentially nothing about, which makes formulating opinions easier (nothing harder for me these days than formulating an unbiased opinion about a bottle of Champagne), but also makes ambast-ing the brands more difficult. It’s clear that the moment to learn about cider has arrived. What better place to start than with a cider house that has compelled me from first sip: Eden. Two weeks ago, four of us piled in a rental car and headed north to a cider open house at Eden.

Prior to this trip, I’d met Eleanor Léger (proprietress of Eden Ciders) a handful of times. She and I worked together one day, planned a cider dinner at one of my accounts, exchanged many cordial emails. She’s an inspiring woman. Her approach to cider is extremely wine-driven (for lack of a better word), and her love of wine shows in the profile of her ciders. In general, cider conversations hang out somewhere between beer and wine. Discussions of fruit varieties reminds us of wine, but use of the term “bottle conditioning” inevitably takes us to beer. I’ve found that as a wine person who dabbles in beer, Eden Ciders strike the perfect vinous chord and, with their bracing apple tannins, have uncanny abilities at the table.

When we were an hour and a half or so from our destination, the WilloughVale Inn and Cottages in Westmore Vermont, Jeff picked up the phone to call Eleanor. We were worried about accommodations and dinner. “Snow? Slow down? Ok … Yep. I’ll be careful … thanks so much! Yes we’ll see you soon! Thanks again. Ok bye.” The temperature had been dropping steadily since Brooklyn, but not a whisper of precipitation. Jeff turned to us, “she says when we get to Saint Johnsbury, there will be snow.” A green road sign for Saint Johnsbury hove into view. “She also says she’ll meet us at the hotel with beer and pizza.” A murmur of approval from the backseat. “Sweet!”

Within ten minutes, snow was falling all around us, growing steadily more powdery and voluminous as we drove north. By the time we’d exited the highway, twisting and turning, climbing and descending rolling hills, we’d slowed from 90 miles an hour to under 40, and our headlights revealed nothing but white snow against black night. Eleanor pulled into the parking lot of WilloughVale Inn not more than 2 minutes behind us, and stepped from her vehicle with several flat, aromatic boxes, two cases of beer, and four booze reps from New Jersey. We let ourselves into the hotel (we were the only guests; there were no employees to be found), and settled in the living room with pizza, beer, and the Super Bowl. 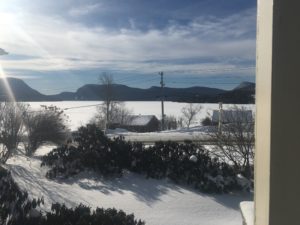 View from the WilloughVale Inn and Cottages.

I woke up the next morning with the joyous sensation of being deep in country. We caught up on emails as well as the latest political news before heading to the orchards. Approximately eight miles from the Canadian border, the terroir Eleanor plays with is a unique microclimate. Married to a French Canadian, Eleanor decided when she settled in the area to make cidre de glace, the traditional Ice Cider most often associated with Québec. Her first order of business was to figure out which types of apples are best suited to the area, and through experiment she discovered that for the most part French varieties work best. (Eleanor does also use some English as well as New England Heirloom varieties.)

To make ice cider, apples are pressed in the winter with frigid temperatures on the horizon. The juice is then left to freeze in containers outside. This process renders a tiny amount of incredibly concentrated, sweet juice (like something that you’d pour over ice cream), which is transferred to an indoor cellar to ferment. At Eden, fermentation is accomplished with a Riesling yeast, temperature sensitive and accustomed to high sugar content, a yeast that is easy to stop at exactly the right moment. To stop the fermentation, the juice goes back outside into the cold. Once I saw the pieces, the process, which takes 4 months start to finish, began to seem quite simple and natural.

The most concentrated and high sugar content juice goes into ice ciders, and there are three: Heirloom, Northern Spy, and Honey Crisp. Heirloom and Honey Crisp are aged for six months to a year in stainless steel tank, and then a year in bottle before release. Northern Spy sees a year of barrel aging in French oak. Though I don’t feel especially qualified to give in depth tasting notes on these, I’ll offer my impression of the differences. Heirloom is the most traditional in profile, intensely sweet with balanced acidity, and classic. Northern Spy offers the mellow and burnished caramel spice note of oak. Honey Crisp is bright and lively with the succulent character of that very popular apple. All ring in at 10% alcohol, 15% sugar (150 grams/liter).

After a short-lived but amusing crack at cross country skiing, we migrated to Newport Vermont to Eleanor’s tasting room, where we met David Biun, the head cider maker. This guy came to Eden from an upstate New York winery, and what an incredible score he’s been for Eleanor. He seemed to ooze information about cider apples and processes. We learned, for example, that culinary apples are harder to make cider out of because they have fewer phenols and flavonoid compounds (read: less flavor), also that they are less nutritious for the yeasts. Bittersweet and heritage apples are more nutritious, which results in a smoother fermentation.

As I understand it, at some point Eleanor decided she needed to do something with the juice that wasn’t quite at the concentration level for ice cider, and so she began to make traditional dry and off-dry ciders, but in her own, special way. We began the tasting with Juliette, a still, dry cider that resonates sort of like a bone dry Riesling. Made from early ripening apples varieties planted in Heath orchard in Canada, it’s 6.4% alcohol, tangy, delicate, and fresh. With 0.0% sugar, I’d think you could sub this in for pretty much any crisp dry white with success. 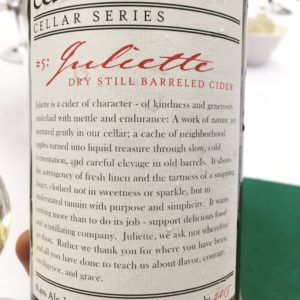 This cider was named after Juliette Pope, one of the industry’s most beloved wine luminaries.

Eden’s Dry and Semi-Dry sparkling ciders are densely carbonated and ridiculously food friendly in their structure and tannins. They finish their second fermentation in the bottle and are hand disgorged. While I like the Dry, which is 50% Kingston Black apples and 0.0% sugar, I’m particularly fond of the Semi-Dry, which comprises different apples and is topped up with ice cider to bring it up to 1% sugar. “Semi-dry” is almost a misnomer here because this cider would drink dry beside basically all other ciders. It has beautiful texture and very light bitterness. 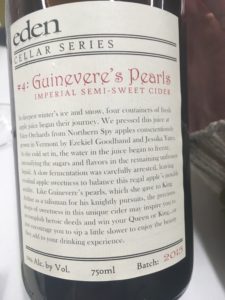 Look out for this one. It’s sensational.

As Eleanor poured the next sparkling cider into our glasses, David explained that for this experiment, one of their Cellar Series called Guinevere’s Pearls, he’d used Northern Spy apples and concentrated the juice using the ice cider process. Apparently grapes have 3x the flavor precursors that apples do, and one of the ways to combat this unfavorable ratio is to concentrate the apple juice. At 11% alcohol and 2 grams of sugar, this cider is just insanely good. Creamy and aromatic, it made me think of a delicious, spiced apple sauce. A reservation for all the rest of the stock went in post haste, and I’m eagerly awaiting its arrival in New York.

One of Eleanor’s most popular ciders is her rosé, which is in fact more of a currant/apple wine. She loves French rosés, and wanted to make something to drink in the same context: on a warm day, for apéro, for refreshment. She searched long and hard for a native ingredient to make the cider pink, and finally settled on red currants. Originally she used the currants planted on her property, but as demand has grown she now uses a top quality currant concentrate from Germany with excellent results. She chose currants for their tangy properties, and it’s the perfect fit. At 11% alcohol and 1.2% sugar (once again, an ice cider dosage), it’s the most wine-like, and amongst the most satisfying products Eden makes. It’s also the only sparkling cider in their collection that sees forced carbonation (meaning the carbonation is added rather than taking place in the bottle à la Eden’s version of the Champagne method). I’d happily drink this over 99% of French rosé. 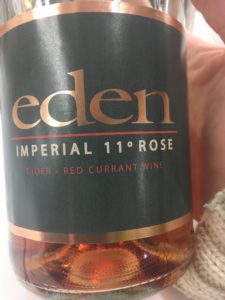 Meets all pink wine need, and surpasses 99% of its grape-based competition in quality.

We continued the tasting with hopped cider, experimental cider, brandy and bourbon barrel aged ice ciders, and more, however my notes begin to break down as it was close to order board cutoff and I had to keep running upstairs in search of cell phone reception.

After lunch a late and satisfying lunch, we commandeered our very own cabin at WilloughVale. Jeff invited the New Jersey reps to come over for dinner and an extensive tasting of ciders and beer with no spit cups. It was quite an ad hoc party, and as the blood alcohol level crept up, so did the decibel level. I made my escape down a frozen slope to the hotel amidst raging debate over who the five most influential people in cider are today. Eleanor Léger was at the top of the list.