A Visit from the Sherry Gods.

I really thought this post was going to be about my next step in life, because you, dear reader (insert note of sarcasm here) are on the edge of your seat wondering what I’m doing with myself post New York, where I’m headed, and for whom I’ll be working. I was going to tell you, and one day I will tell you, but something happened this week that cried out for documentation.

Last month my boss sent a rather surprising email. In it he told us that the company was going to begin representing a very high end sherry house called Bodegas Alonso. Apparently of impeccable reputation in Europe and Japan, Bodegas Alonso had decided that New York would be its next market. The email was surprising because … how do I put this? We’re not exactly a high end sherry house kind of book. Don’t get me wrong, I was excited. I love sherry, and I drink it often. 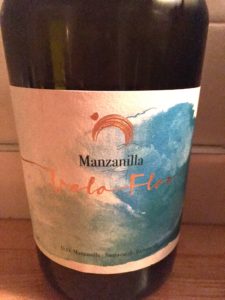 The youngest wine in the collection: Manzanilla “Madura” (9-10 years old). The bottle is Jura-esque … so is the wine.

Of the more conventional sherry houses on the radar in the NYC wine geek world, I’m especially fond of Valdespino (for Fino and Palo Cortado), Gutierrez Colosia (for Oloroso), Barbadillo (for Manzanilla En Rama), Cesar Florido (for Fino Cipiona), the list goes on … While I’m ignorant about sherry relative to many of my peers, it’s part of a group of wines I seek out for personal pleasure rather than for work. I particularly like biologically aged sherries (Fino, Manzanilla) and am certainly addicted to the aromas and flavors of flor. Oxidatively aged sherries (Oloroso) don’t generally speak to me as much, but that said I’ve happily sucked down many glasses of Sangre Y Trabajadero in my time. (I also used to carry it to my place in Brooklyn in my bike’s water bottle cage, taking a sip here and there to keep warm on cold journeys home.)

In fact being somewhat ignorant about sherries, never having travelled to Jeréz, not taking part in either the events surrounding them or the politics, makes me somewhat open minded, a relatively blank slate where sherry is concerned, with little more than vague knowledge of my own preferences.

My boss sent us some information about Bodegas Alonso, which I read several times trying to get my head around the story, and basically told us that for three days in early November we were to drop everything and make sure their importer, a fabulous woman named Jill Mott, was put in front of as many of the best buyers in the city as possible. Full-disclosure, my reaction was mixed. While I was absolutely positive the wines would be excellent, reaching buyers in early November can be tough, particularly with unknown, pricey, and esoteric goods. Nonetheless, we did our best, and anticipated Jill Mott’s visit with a mixture of excitement and apprehension.

Bodegas Alonso is project of patrimony preservation. The brothers Asencio purchased three vital cellars in Sanlúcar de Barrameda, and with them many old, un-refreshed botas of wine. The cellars were those of Gaspar Florido, Pedro Romero, and Fernando Méndez. As Jill describes it, when the brothers began to taste wine out of these very old casks, they quickly realized they had to make this their life’s work, the continuation and preservation of tradition. The Asencio brothers also have vineyards of their own in superior locations, which they farm biodynamically. From these vineyards they will make their own Manzanilla solera. There’s a sort of past meets future quality to this story, which obviously raises the question: what about the middle? The answer is somewhat unclear (at least to me, but I think possibly to them as well. One day at a time.). For the moment, the brothers have elected to release tiny quantities of very old vine, the youngest of which is 35, the oldest of which is 120. 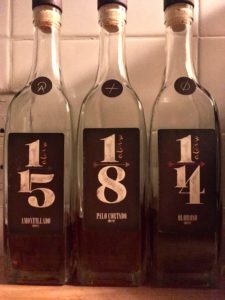 The numbers on the label indicate the number of casks that exist of each wine.

It is impossible to mentally prepare oneself for the way these wines smell and taste, likewise the emotional response they evoke. At least for your humble narrator, it was also impossible to compare and contrast them because the lines between Oloroso, Amontillado, and Palo Cortado ran blurry, and in some ways the style of each cellar: Florido, Romero, Méndez, spoke louder than the “type” of sherry itself. I discovered a new fondness for Oloroso, for these oxidatively aged sherries have no sweetness and are full of glorious, penetrating acidity. It became abundantly clear right away that these wines bear little resemblance to wine as I know it. With some sips, they resonated like Jura wines, with deeply savory notes of mushrooms and celery, broth-y elixirs. With others, they seemed more like fine spirits: Cognacs and the like … It’s certainly the case that one needs only a few drops to be satisfied. The wines are incredibly mouth-filling and intense. The flavors linger for minutes on the palate; the aromas linger for hours on the skin. With an anecdote of one of the Asencio brothers getting epically laid after dabbing himself with 100+ year old Palo Cortado, we considered re-branding these as perfumes rather than potables. The sensuality of these very old wines is beyond language …

Which brings me to my next observation about these wines: they were utterly striking to every taster, and seemed to alter the quality of the moment, to take the drinker outside of her of himself. What started out a wide eyed “holy shit” stare upon nosing and sipping the first old wine, Amontillado from the Gaspar Florido cellar, turned into a glazed, reverent semi-coma by the end of the tasting.

My best example of the effect these wines have comes from Flora Bar on the ground floor of Met Breuer Museum. The buyer certainly had other things to do, cases to put away, staff meal to eat before service, menus to reprint, a meeting to prep the servers, and yet we lost track of time completely, sitting outside in the late afternoon sun, allowing these insanely complex flavors to wash over us, talking about flamenco, as I recall. It was like the normal world, chalk full of busy subways and technological overload somehow ceased to exist as long as there was old sherry in the glass. He turned to me at a certain point and said “I didn’t know it was going to be this kind of tasting. You told me we were just tasting some sherries!” I protested “I did my best given the information I had. I didn’t know the magnitude myself.” How could one possibly know?

I’m still processing this experience. I’m amazed that wine my grandmother’s age can be so delicious. Our discussions over Jill’s visit made me ponder the fact that normal drinkers are used to the flavors of young, fresh wine. Everything these days is made for fast consumption: quick, gobble it up, slurp it down, and get ready for the next hot thing. Mature flavors, as popular as they are amongst geeks, are a hard sell to standard issue guests and shoppers. Like a lot of things in the world today, this made me sad. Then, I thought, there’s nothing to be sad about. I’m so lucky to have the chance to taste these. My understanding of both wine and life will be subtly altered because of them.