A Bavarian in the Jura: Ludwig Bindernagel 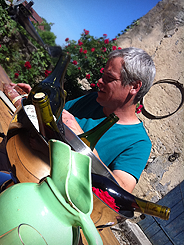 I first became aware of Domaine Le Chais du Vieux Bourg when Mary Taylor brought the wines by Chambers Street for me to taste. (Mary works for a small importer called Langdon-Shiverick.) The first wine she showed me was a bone dry Pinot Noir-based Crémant from 2007 fruit called “Délire des Lyres.” This wine struck me as unusual for a number of reasons: its long period of maceration, its varietal composition (normally Crémant du Jura is made from Chardonnay), and its price ($30 retail… steep for Crémant and, ultimately why I didn’t buy the wine immediately because it was superb). The nose was nutty and mushroomy; the palate was dry to the point of austerity. It’s a wine for lovers of serious Champagne. Mary also showed me a Chardonnay and Savagnin blend called “BB1” that I liked, and a 2007 Poulsard that stole my heart instantly. The wine was supple and ripe with sweet cherry aromatics, an ethereally pale hue, and 11.9% alcohol. How could I refuse? Mary also told me that the winemaker: Ludwig Bindernagel (something told me he wasn’t Jurassian…) would be coming to visit.

By the time Ludwig came to town, I’d been informed that his wines were “all the rage” in Paris. Parisians have good taste. I sidled up to his table at a tasting to find a tall, handsome, soft-spoken German man pouring a lineup of attractively labeled Jura wines. He had a full head of gray hair and his small, pointed features gave him a vaguely elfin look. His smile was sensitive yet fun-loving. Little did I know I would see that smile many more times, as well as the smile of his French wife, Nathalie, an ambitious blond woman with full, pouty lips, and impeccable taste.

Ludwig and Nathalie have 2.5 hectares of vines in Arlay in the midsection of the Jura, but they live in Poligny, several kilometers away. Poligny, for those less than intimately familiar with the Jura, is the Capitol of Comte, the musky, nutty, semi-hard cheese that is the ultimate pairing with the sous voile Savagnins of the region. Their house, on one of the main drags of the town, is also a “hotel” in the sense that they have two honeymoon suite-like clusters of rooms for rent. It only seemed logical, after making an appointment to taste with Ludwig at the Domaine, that my importer friend and I should stay at their bed and breakfast during our five day long visit to the region. And an excellent choice it turned out to be. Nathalie greeted us on a Sunday evening and we embarked on a tour of the house, a stone mansion with different branches dating back to various centuries. A vast and arching wood front door opened upon a long, stone corridor, the walls of which were decorated with milky plaster cherubs, flowers, and ribbons. At the end of the corridor, she had hung sheer white curtains that parted to reveal a breathtaking courtyard, its periphery planted to roses in all colors. (Trust me, after Brooklyn, this was paradise.) We ate dinner with the Bindernagels: fresh poached river fish in Vin Jaune aspic with salad and Vin Jaune mayonnaise. As an aperitif, we drank “Délire des Lyres” as well as a Brut Rosé of Pinot Noir; with dinner, we drank Ludwig’s Vin Jaune, a light, young, accessible style of yellow wine. Unsurprisingly, all paired charmingly with a dusky evening in the Bindernagel courtyard. We finished the evening with Ludwig’s desert wine called “Papaille” (a play on words: “Pas Paille” or “not Vin de Paille”), a sweet wine aged under flor with 200 grams of residual sugar. Then we smoked cigarettes (Ludwig and Nathalie, as we came to discover, were chain smokers).

Ludwig came to the Jura in the early 2000s. His first vintage was, if I recall correctly, 2002. I asked “So, are you German.” “No… not German… Bavarian. It’s different.” His English was good but he was clearly shy and a bit uncomfortable in the language; we defaulted to French chitchat most of the time. Nathalie also spoke English, but decided that we needed to work on our French and determined to make us speak it whenever possible. I distinctly remember a conversation in which Nathalie and I exchanged expressions in our respective languages: Apparently the French version of “he has lots of baggage” is “il a une casserole en tren” (“he carries a casserole behind him”). During harvest each year, the Bindernagel courtyard is flooded with Bavarians who come each year to pick Ludwig’s grapes, camp in Ludwig’s yard, and party every night. They bring beer, which they exchange for local wine to bring back to Bavaria. Nathalie recently purchased a used restaurant grill with which to feed these visitors. In recent years, so many have wanted to come that they have had more pickers than they can possibly use at such a small Domaine. A good natured and entertaining couple, Nathalie and Ludwig stayed up late drinking, talking, and smoking with us on several occasions, sharing stories from their former lives: Ludwig used to be an architect, which might explain the beautiful interior and exterior of the house. Nathalie was formerly married and has an adopted daughter who works in fashion in Paris. Now she loves to do “bricolage” (a term that loosely means “crafts” or “housework”). I got the impression that everything chez Bindernagel was very carefully designed and executed, from the bottle labels to the impeccable domicile to the wines themselves to the vast array of breakfast foods Nathalie prepared for us each morning including jams she makes from wild strawberries, rose petals, Pinot Noir grapes, clementines… These are people to whom quality of life is very important. They had created an idyllic life for themselves, which I found both admirable and enviable. Yet as much as I enjoyed Ludwig’s wines, I didn’t exactly view him as a vigneron.

Why not? For one thing, he doesn’t come from a winemaking background and has only learned the trade recently. For another, his life didn’t exactly square with my mental image of a rugged country farmer. Still, his vineyard work is very good. He doesn’t use chemicals and has tall grass growing between the rows of vines; he works in the vines every day. And his wines are delicious. “BB1” (another play on words “baby one,” the very first wine Ludwig made), comprises 75-85% Chardonnay and the rest Savagnin, co-harvested and co-fermented. The wine is raised ouillé rather than sous voile and ferments for several years in a very cold cellar. The 2008 was fantastic, with gorgeous fresh acidity, white fleshy fruits, and the faintest hint of quince. His Poulsards are extremely transparent to vintage. We tasted a small vertical beginning with 2009, which was much fruitier and deeper in color than the Rosé-light ’08. The nose was all kirsch and sweet cherry. I asked if the wine underwent carbonic maceration and he replied that there is always some “carbo” but it’s unintentional. We skipped the ’07 and ’08 of the wine, which I already knew, and went to the 2006. At first this wine was extremely reduced, but once the reduction had blown off, it was vividly rose petal-y down to the velvety texture itself. 2005 was almost 14% alcohol and Ludwig confessed he thought he had harvested a bit too late. 2003 was very evolved and “faissant” (gamy) in a way that I associate with Burgundy. I liked the wine but found that, like most 2003s, it lacked the acidity I crave in Poulsard. Finally, we tasted the structured and raspberry-like 2005 Pinot Noir. Ludwig explained that this was a special strain of Pinot Noir known as “Savagnin Noir,” of which there are only two known parcels. This wine I adored (I remembered that I had some of Ludwig’s Pinot Noir coming to Chambers Street from Mary back in New York). We concluded the tasting with a red and a white Macvin, “In Finot Veritas” and “MicMacVin; both are extremely popular in Paris and were succulent and well-balanced. I began to think that Ludwig had a nice touch with sticky wines. We discussed Ludwig’s vineyard and cellar work. He puts two grams of sulfur in the white wines at bottling, one in the Pinot Noir, and none in the Poulsard. On the other hand, Ludwig uses 3-4 grams of sulfur at harvest, a decision that made me question everything except possibly the existence of God… or at least everything about Ludwig as a winemaker. It’s generally understood that sulfur before fermentation kills vineyard yeasts that the wine needs to ferment spontaneously. All of a sudden I began to recall the sweet fruit notes of Ludwig’s Poulsards… He told me he never yeasted the wine, but what if pre-fermentation sulfur made yeasting a necessity? Putain! By this point Nathalie had joined us with snacks, foie gras, cake soaked in orange syrup, gougères, and we were no longer spitting but savoring every sip of the delicious Macvin as we basked in early afternoon sunlight spilling onto to table in the Bindernagel’s courtyard. I pushed the pre-fermentation sulfuring to the back of my mind and relished everything that was lovely about Ludwig and Nathalie.