What Scott’s Been Up To.

It’s hard to get excited about wine writing in this political climate. Because what’s the point? The expression “Political Climate” takes on more irony and resonance as climate change becomes a greater and greater political issue. We wonder about the future of wine as the earth warms and the weather turns increasingly mercurial, as vignerons lose their crops to uncharacteristically early budding followed by late spring frosts, as torrential downpours make working the soil impossible, as the planet lashes out against us for the damages we’ve done. In short, we wonder if Burgundy will have turned into Châteauneuf-du-Pape by the time our children are our age. Meanwhile the snow falls and it’s winter in New York.

A tree grows on Ainslie Street.

The optimists are terrified, and the realists? Well the realists have become hedonists. They’re living each day like it might be their last. The Statue of Liberty, drowning, grasps Barak Obama’s leg as Trump’s inauguration looms on the horizon. Post election anxiety, which waned temporarily, is back with full force as pundits on Face of the Nation rehash our future president’s late-night tweets while debating who will wag, the tail (Trump’s cabinet) or the dog? But our soon to be former president tells us he’s not viewing Trump’s presidency as the apocalypse, and I’ll try to do the same. What choice do we have?

Then there’s this bizarre glimmer of a notion that my health insurance might cost less if the Affordable Care Act is repealed. We’ll see. Presently, my experience with our health care system consists of hours spent researching, countless phone calls and online registration forms, estimates and fine print, all leading to the same conclusion, namely that for health care in America you pay .. and then you pay again … and then you pay some more, paying your insurance company for the right not be bankrupted by the medical machine if something goes wrong. Insurance is “the business of ensuring property against loss or harm in specified contingencies, a payment proportionate to the risks involved.” Someone has to foot the bill, and it’s a big one. 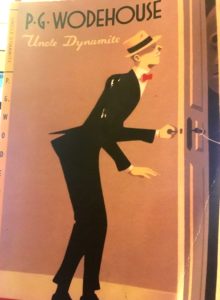 Exploring the oeuvre beyond Jeeves and Wooster.

Personally I’m hiding out in a land of puppies, ’90s boy bands, and PG Wodehouse, everything wholesome and G rated. It’s a pretty straightforward approach to tough times ahead that consists of cultivating the worst possible expectations, while enjoying the simple pleasures of life, from cheesy lyrics and a four part harmony to hilarious prose from a by-gone era. In her 2nd to last month of life, my mom called with the following piece of advice: “pat your sweet kitty, Sophie”, and I did. Patting the cats and keeping a journal, the poor man’s therapy.

A pair of new wines from Bow and Arrow has been a bright spot in the gloom. These wines arrived during the busiest week of the holiday season, and so it wasn’t until after the madness that I got to crack them and see how they were tasting. The wines seemed to have benefited from settling at the warehouse for a couple of weeks. It’s always a good idea to let wines settle after travel, but excitement and cash flow prevent us from doing so. In the case of the Bow and Arrow wines, which are crafted with minimal intervention, it’s been especially true that they need a few weeks in New York to grow into themselves.

For those unfamiliar with Bow and Arrow, these wines are made by Scott Frank, who riffs on Loire Valley appellations, grapes, and terroirs, in Oregon. Scott works exclusively with Loire Valley varieties, fruit from cool sites, which he shepherds into the bottle in a Loire-ish manner, often using semi-carbonic maceration for the reds, minimal punchdowns, little to no racking, and small additions of SO2. Didier Barouillet of Close Roche Blanche, as well as Theirry Puzelat and Marc Ollivier consulted for Scott on this project. Do Bow and Arrow wines taste like Loire Valley wines? In my opinion, sometimes. You’ll have to seek a few out and see for yourself.

2015 was a hot, dry year for our friends in Oregon. It will not surprise you, dear reader, to learn that apropos of climate change, our friends in Oregon have been experiencing more and more hot, dry vintages. However, there’s a silver lining, namely vineyards and varieties that previously struggled for ripeness, get ripe, in this climate. Scott’s 2015 wines are riper than in previous vintages, and it suits the wines very, very well. In the case of Air Guitar, this manifests as a certain seriousness and density of tannins that suggests a long life, and in the case of Rhinestones, a sweet, sexy, red-fruited succulence. 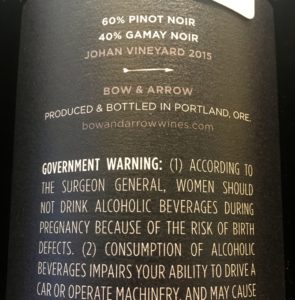 A Pinot-heavy vintages for Rhinestones.

It’s impossible to write in depth about Bow and Arrow without mentioning the Johan Vineyard in Willamette’s west valley, a vineyard that is farmed biodynamically. In Johan, the topsoil is poorer, but also more complex than in the “Hollywood Hills” of the Willamette: Chehalem, Dundee, Eola-Amity. There’s less cake-y volcanic clay, and lots of graphite. There are Loire Valley grapes planted in Johan: Cabernet Franc, Melon de Bourgogne, Gamay. One day, Johan will be within an AVA called Van Doozer Corridor, but for the moment it’s a spot that flies under the radar, which keeps the price of grapes relatively low.

“Only the French can make a diamond.”

In 2015, all the fruit for Rhinestones came from the Johan Vineyard. The wine is 60/40 Pinot Noir and Gamay, though in past vintages it’s been Gamay heavy. My understanding is that Rhinestones is like a Cheverny wine, inspired by those gloriously gulp-able Clos de Tue-Boeuf bottles: La Gravotte and Les Caillères. Delicately colored and gleaming, the wine’s ripe, red pinosity is explosive and gorgeous, lifted still further by the high-toned aromatics and crunch of Gamay. There’s a deep sweetness to the fruit, with no sacrifice of balance or acidity. It’s the tart sweetness of cranberry and cherry that prevail, accompanied by the faintest whiff of funk that carries this wine across the palate and leaves the drinker thirsting for more. 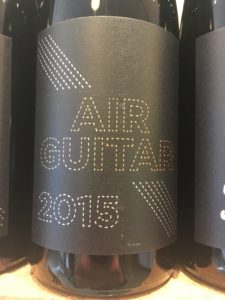 Pairs well with King Gizzard and the Lizard Wizard.

Air Guitar is more mysterious. It’s Scott’s take on a red from the Anjou area, a blend of Cabernets, Franc and Sauvignon. In 2013, it was made sans soufre, but no longer. In 2015, it’s 60/40 Cabernet Sauvignon from a place called Borgo Pass, and Cabernet Franc from Johan. In my notes from our June trip, I have jotted that Borgo Pass is a “weird, Alpine site where Teutonic gets Pinot Meunier”, but further research reveals there’s a town in Oregon called “Alpine”, whence the Cabernet Sauvignon for this wild wine. Air Guitar is dark and sleek, with black and green pepper, dark fruit, earth and funk, with reduction that blows off in a decanter. The tannins are present at the beginning, ripe and persistent at the end. It’s more serious, less exuberant than Rhinestones, and ultimately, I found, more complex. “We’re quite pleased with that one, too” Scott said. “If it evolves like 2014, it should be a keeper.”

Information about the wine can feature on the back label as well.

In closing, I’ll mention something I think about a lot in collection with Bow and Arrow, which is the overall coherence of the brand. The exterior is consistent with the interior, also with the statement the winemaker is trying to make. Using the word “brand” generally makes me ask myself “am I a connoisseur, or am I a hack?” But in the past year working in wholesale, I’ve concluded that a coherent brand (good packaging, a nice label with information about the wine on it, a good story, and a reasonable price) not only encourages sales, but shows respect to the customer. It says “your experience with my wine is more important than my ego.” From what I’ve seen, Scott is far more humble than egotistical, which is reflected in both his wines and his brand. I like that.