Soul of a Place.

People who’ve visited many vineyards know the feeling of discovering — for themselves — a new, profound terroir: a gentle squeeze on the heart, a quickening of the senses, a wide-eyed stare taking in the panorama, awe vanquishing the need to pee, the chill in the air, the daunting shadow of an upcoming work task, while a vigneronne speaks of the soil, climate, and grapes, which she sees virtually every day of her life because winemaking and vineyard farming are not merely jobs, but labors of love.

Sometimes (though not always) these places are beautiful in their own right, but as wine lovers we see — in addition to the rolling hills or the severe, terraced slope — the potential, the (dare I say) gods-given sense of rightness of bumbling humans having planted grape vines here. Sends a shiver down my spine every time …

I recently had the chance to explore the Columbia Gorge for a second time, and in more depth than I’d explored it the first. The day was marked by spine-shivers and random sensations of profundity. It was also marked by bizarre cognitive dissonance because I’m used to having those soul-tickles in French wine regions. It was like … in my mind I was in the Alps, but in reality I was in the Gorge. Weird, but amazing.

Our first stop was in Mosier, OR, at Idiot’s Grace. The McCormack family settled in the Gorge two generations ago. The father built a winery in Lyle, WA, and then in 2002, Brian took the helm. Brian has a new winery in Mosier, and collaborates with his father while trying to convince him that screw caps need to go.

(Note: the Columbia Gorge AVA straddles the border of Washington State and Oregon. Mosier and Hood River are on the Oregon side; Attavus vineyard whence Analemma Blanc de Noirs is on the Washington side, as is Underwood Mountain, perhaps the most hallowed and mysterious Gorge terroir.)

We toured Brian’s Mosier vineyards looking at young vine Primitivo, a fascinating choice for the Gorge. We tend to think of this as a cool, high-altitude wine region, which it is in some places, but not everywhere. Some of the Gorge slopes roast during the summer, and the vineyards surrounding Brian’s winery are not especially high altitude. He told us that he planted Primitivo because of its genetic relationship to Zinfandel. He wanted to plant a variety that claims some sort of nativity to North America. Oregonian vineyard owners are free to plant whatever they want. I’m intrigued by the logic that dictates their choices. To me, one of the most striking things that separates the new world from the old is freedom. It’s very American, this lack of encumbrance by tradition, and unlike most “very American” things like over-priced health insurance and guns, I’m all for it!

We tasted a few wines out of bottle: delicious dry Gewürztraminer (the Gorge is one of my favorite places for this grape), Cabernet Franc, Chenin, and Semillon. I was smitten by the Semillon, and the bottle I purchased to bring home did not disappoint. If anything it was even better than my recollection.

Semillon walks a fine line between unctuous and lithe, and has a slight textural waxiness that sets it apart from other rich whites. This bottle was full of yellow, tropical fruit, yet salty, like preserved lemon. I could smell the acid, which was bewitchingly cranberry-like. There’s a lovely high note of sweet orange flower. Flavors of mango and papaya ride a silken, slip’n’slide palate. There are delicious phenolics that make me wonder if Brian soaked the grapes briefly on the skins, or maybe it’s just the magic of Semillon …

We finished with a barrel tasting of 2017 reds: Gamay, Cab Franc. I loved the Gamay. The Cab Franc showed hints of wild fire, but they were faint. I believe Brian’s 2017s will be quite successful out of bottle, and I look forward to trying them.

Next we went to Analemma (also in Mosier). As anyone who has visited this estate will report, Analemma is an incredibly special place. I’ve been obsessed with these wines for years and was pleased to be back.

Steven received us in an unexpected manner: he pulled tank/barrel samples of wines in their most awkward phase (either finishing primary fermentation, or in the middle of malolactic fermentation), which is sort of like inviting guests to your house in mid-construction. Hopefully your guests will see the structure and artistry of what’s to come; they’ll certainly see contractor’s equipment, sawdust, and sheer plastic tarps everywhere! Sharing his unfinished wines struck us as generous, personal, even risky, and we were naturally thrilled to have the opportunity to taste them this way. 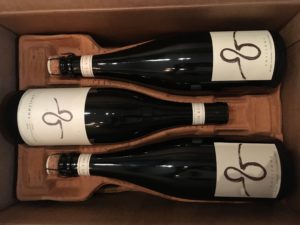 Stocking up on Blanc de Noirs.

I last went to Analemma in 2016, and since then Steven and Kris have made their first vintages of Syrah and Mencía, among their preferred cépages for Mosier, along with Godello and Albariño. The Syrah was fascinating, its unfettered Rhône-iness impressive in its own right. It’s a wound up wine, but powerfully built for such young vines, and elegant. I was taken by the unfinished Godello and look forward to the final version.

Though we didn’t try the new release of Analemma Blanc de Noirs at the winery, we bought bottles and drank one that evening. I was ever-s0-slightly concerned that the 2014 vintage (current release of BdN) would be too warm for sparkling wine. Not so. This wine has as much face-melting acidity as the 2011 vintage that stole by heart years ago. This is one of my favorite wines on the planet, and I drink a lotta Champagne. With each sip, a new layer of flavor, a hint of red raspberry Pinot fruit, a whiff of lees-y oxidation, creamy texture, and then mouth-watering, hyper-focused acidity all the way down … 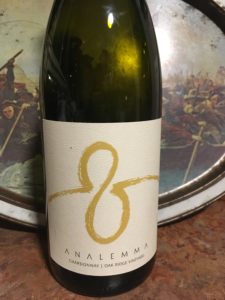 A new joy from Analemma came in the form of Chardonnay. I’d had the 2015 Analemma Chardonnay, and it had seemed a little warm and woody. At the time, I knew far less about recent Oregon vintages than I do now. 2015 was super hot and dry, even in the Gorge. The current release of this wine (2016) is as Puligny-Montrachet-like as I’ve tasted from the new world. It reminded me of a wine Jean-Marc Pillot might’ve made. The oak imparts a hint of wisteria and coconut, but balanced by riveting acidity and floral notes of mandarin and white peach. This wine comes from the Oak Ridge vineyard in Washington. Planted in 1984, at an elevation similar to Attavus, Oak Ridge is consistently harvested in late October, which blows my mind. The long growing season here is certainly part of the magic.

On to Hiyu Wine Farm! I finally (after at least a year of trying) had the good fortune to meet Nate Reddy during the I Love Gamay festival in May of last year. He was the guest sommelier at dinner at Coquine, a dinner featuring at least six lamb body parts including hearts and organ meats. I was struck by his warmth, as well as his pairings. This is someone who, while clearly unafraid to steer people out of their comfort zones, is a consummate hospitality professional. I mention this because Nate’s wines are (in my opinion) food wines, and when he serves them at Hiyu, it’s alongside a bite to eat. (If you’re lucky, this includes salad greens grown at Hiyu.) Nate comes from a restaurant background, and broke away first to work at Antica Terra, then to start a sustainable farm. 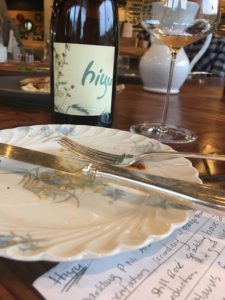 Falcon Box with the remnants of crostini and tonnato sauce.

It would be misguided on my part to try to summarize Nate’s mission, or his work. This is a winery that must be experienced. Many of the wines at Hiyu are field blends, each with a particular aesthetic or underlying motivation. My favorite that day was “Falcon Box,” which is all the Burgundy grapes, half red, half white. The resultant wine is bronze, rich, broad, expansive across the mid-palate and almost Alsatian in spirit. 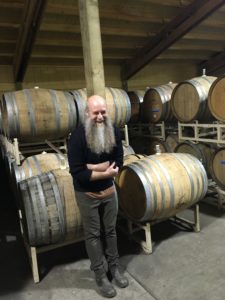 A man and his barrels …

Nate makes Pinot Noir from the Attavus vineyard. His 2018 barrel sample was stunning. At 1800 feet elevation, this is incredibly high altitude Pinot, in other words, right up my alley, with fine and arresting tannins. I also enjoyed Nate’s Attavus solera comprising Gewürztraminer and Pinot Noir. (Have those cépages ever been thrown together before?)

There’s certainly an aura of mad genius about Nate, but I’d say more visionary than madman. While visiting Hiyu, part of me wondered if it isn’t the rest of us who are mad. After all, is it really so strange to conceive of an ambitious project and then realize it? Is it really so strange to grow one’s own food, and one’s own grapes, and invite others to share the bounty? It’s unusual in America in 2019, but when this happens in the old world, we find it at once quaint and totally normal.

It wasn’t until the next morning that I truly beheld the Gorge’s majesty: houses overlooking a 1000 foot drop straight down to the river, tiny wind surfers making ribbon-y waves below, doug firs everywhere, tempestuous breezes, grape vines in wispy fog, peaks jutting up into the cloud cover, dramatic as a Rachmaninoff piano concerto. What would my life be like, I wondered, if my 28 acres were in Lyle rather than Saxapahaw?